ATs: All that and more 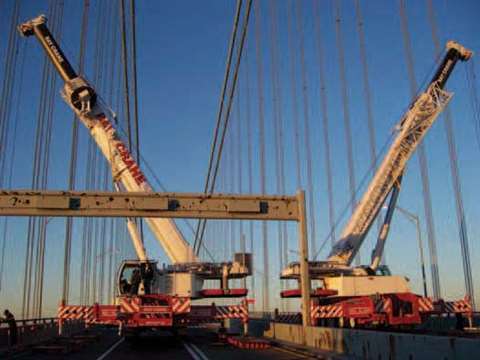 In 2006, at least eight new all terrain cranes were introduced to the US market, with the 200 to 275 ton class crane apparently the most popular. While production departments continue to struggle to fill orders, engineering teams are working on new designs. For example, two 1,100 ton capacity machines are in development.

Historically a crane designed for the European market, ATs are now a mainstay in the fleets of most American crane rental companies. The critical questions of transport, reach, lift capabilities and ease of set-up have been answered for US crane owners, who are using these machines on projects that require precision, mobility and power. While ATs have not replaced any given type of crane in the market, they have earned their place among the typically more American-styled or American-produced cranes. Interestingly, every AT sold in the US is built in Europe, Japan or China.

Most everyone associated with marketing ATs in North America are optimistic about the market for these machines, and even if there is a slowdown in construction activity in the next year, the interest in these machines continues to grow.

“[Demand] has increased considerably,” says John Turner with Terex-Demag. “The fiexibility of these type of machines, 'all-terrains,' to drive to and then to get to the job sites allows them to work in conditions worse than allowed for the typical truck crane style of machine. The increase of modular housing utilizes these cranes well. With the overall increase in construction as well as fieet upgrades and demand [is strong for] these units over truck cranes and crawlers. This market is strong for the remainder of this year as well as next year. Machine sales are good for 2007.”

The biggest news in this product class is the number of new machines on the market and the outlook is good for more new models. The most recent ATs introduced into the North American market have been from Tadano Faun, which produces ATs for Tadano America and Link-Belt Construction Equipment.

In October 2006, Link-Belt unveiled its new 250 ton (220 metric ton) ATC-3250. Th is new model has all the attributes of the Link-Belt ATC-3200 but with more power and strength. The ATC-3250 brings the Link-Belt AT offering to three models, ranging in capacity from 130 to 250 tons. Link-Belt has chosen to work in the higher capacity realm of the AT market, making sure not to encroach on its burgeoning RT and truck crane market.

The ATC-3250 has a 43.3 - 223.1 foot (13.2 -68.0 meter), full power, seven-section, latching boom. The sections extend independently by means of one double acting, single-stage hydraulic cylinder. Four pinned positions of 0%, 46%, 92%, and 100% on each section provide 38 extend combinations for good capacity when varying the extensions of the telescoping sections.

With acoustical insulation, the galvaneal cab has a tilting capsule for high boom angle lifting. This capsule, consisting of the seat, joysticks, pedals, and main console, tilts independently of the cab. The controls and instrumentation are ergonomically designed with outrigger controls in the operator's cab. Two electric-over-hydraulic, dual-axis levers with fine metering capability control the winches, boom hoist, and swing. Heating and air conditioning, a cabin pre-heater with a pre-settable timer, AM/FM stereo with CD player, power front window, foodlights, and an integrated cab walk are standard.

The ATC-3250 has a 530 horsepower (390 kW) Mercedes-Benz engine and a ZF AS-Tronic automated 16-speed manual transmission that delivers a top speed of 52.8 mph (85.0 km/h). With five axles, the ATC-3250 has a 10x8x8 drive/steer configuration. The machine can handle grades of 61% and a third-axle lift system provides more inter-bridge spacing to comply with certain transportation requirements found throughout North America.

The primary steering varies with the speed of the crane: below 15.5 mph (25 km/h), axles 1, 2, 4, and 5 steer in combination. As the speed increases, axle 4 and then axle 5 sequentially return to center until axles 1 and 2 become the only two axles steered. There are also five additional steering modes, including independent front, combination, crab, independent rear, and a temporary crab steering mode. The temporary crab mode allows the crane to drive away from an obstruction like a curb or a wall.

Terex-Demag has made a good impression on the North American market, selling one of the best known AT product lines. The five-axle, 170 ton capacity AC 140 is among the best selling ATs in the US, according to sources with Terex in the US.

Early in 2006 TerexDemag upgraded its AC 55 to the AC 55-1. Improvements include a new boom telescoping system that reduces the axle loads and enhances lifting capacity. With the boom telescoped to 131 feet (40 m) and set at a 33 foot (10 m) radius, the increase in lifting capacity over the outgoing model is more than 20%.

Telescoping and setup times of the AC 55-1's fully hydraulic boom are half of that of a pinned boom, and the boom can be telescoped under load, the manufacturer says. A further benefit is a lower weight that reduces the front axle load - the crane will run at 13.2 tons (12 metric tons) per axle, with 5.7 tons (5.15 tonnes) of counterweight, 49.2 feet (15 m) main boom extension and hook blocks, according to the company.

Lifting capacity is increased the most (by between 10 and 20%) on longer combination lengths at medium operating radii. A new option is a 26.2 or 49.2 feet (8 or 15 m) hydraulically offsettable boom extension that can be controlled from the operator cab under full load. This option is also available on the AC 35, AC 35L and AC 55L.

Also expected in iron at Bauma in Munich is the 1,100 ton capacity Liebherr LTM 11000-9.1, under development at the Liebherr-Werk Ehingen factory in Germany. It will have two telescopic boom options - a long one (as the engineering design develops it is getting longer than the initially projected 60 m) and a short one for use with lufing jib.

Largest of these new models is the GMK5275, which is known as the GMK5220 outside the US. Th is five-axle crane has a capacity rating of 275 tons (220 tonnes) and a 223 foot (68 m) main boom. The crane has one of the strongest lifting charts of five-axle cranes on the market with a 15.4 ton (14 tonne) capacity on its fully extended boom.

The higher capacity for this crane is the result of the newly enhanced MegaForm boom profile. The crane also has a stronger but lighter carrier and a new hydraulic electronic steering system. The “steer by wire” system is said to reduce tire ware and improve drivability. The crane carrier has a 420 kW Mercedes engine and Allison transmission.

Additional equipment on the GMK4100B includes a multi-function remote control that allows the operator to execute the outriggers and swing-away jib from the safest and most convenient position outside the cab.

Among the more popular ATs in Grove's product line is the GMK6250L, which is known as the GMK6220-L outside the US, and is rated at 250 tons.

Tadano launched its ATF 65G-4 in late 2005, the third in its “G” or global series of all terrain cranes introduced in 2004. As the name suggests, the global element of the design means the inclusion of specifications and features that consider the difierent regulations of markets around the world, including carrier width, axle spacing and overhangs. The G series has been well received in North America.

The four axle ATF 65-G-4 comes within the 13.23 (12 tonne) per axle limit with a double folding jib, 8 x 6 drive, the full 13.23 (12 tonne) of counterweight and two hook blocks. The 144.36 foot (44 m) single cylinder boom is lighter and has a new profle for safer lifts and a stronge chart. Standard drive/steer is 8 x 6 while 8 x 8 is an option. Also fitted is the automatic electro-hydraulic steering system used on the other G-series models, the ATF 45-3 and ATF 60-3 for optimal turning radii and maneuverability. All axles are steered, offering crab on site, and the rear axles three and four can be manually steered independently of the two front axles. On the road the first and second axles are steered, assisted by the fourth axle, which is electronically steered at up t 15 mph (25 km/h) in line with road regulations.