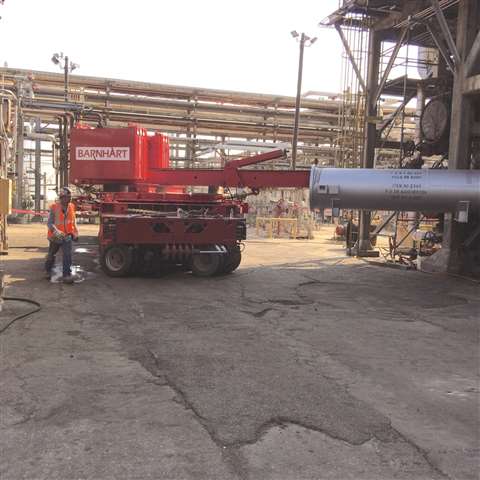 To maintain world-class production levels, refineries are always in the midst of a turnaround or outage of some type, according to Barry Carroll, branch manager for Barnhart Crane & Rigging. At one of the world’s largest integrated refineries, it’s not a question of if a unit will go down, but when. Such was the case last spring when Barnhart was contacted about an emergency project that involved the removal and replacement of a ground-level exchanger shell.

There was a five-day turnaround from identification of the problem to installation of the equipment. The refinery team was familiar with Barnhart’s Movable Counterweight Cantilever System (MOCCS) that had been used on other outages at the facility.

“The owner was impressed with the MOCCS’s ability to quickly and efficiently remove equipment along with the built-in safety features of the system,” Carroll said.

The owner’s idea was to use a 90-ton rough terrain crane with the MOCCS to extract the shell. Due to the component and surrounding unit’s physical access limitations, Barnhart realized its traditional cantilever beam or jack-and-slide solutions were not options.

“Our challenge was to develop a system with equipment available while maximizing safe operations in a live unit,” Carrol said. “We determined that the solution would need to be mobile, modular and maneuverable.”

The exchanger shell was 17-feet long, 3.17-feet wide and weighed 7,000 pounds. The alleyway to the exchanger was narrow, and at 15 feet above grade elevation there was a 10-foot wide overhang protruding from the structure’s face.

“Directly above the exchanger was a tangled mess of live piping within two inches of the shell, as well as instrumentation and structural steel, enveloping the unit,” Carroll said.

The M3A1 would allow Barnhart to maneuver in all XYZ planes and rotate 360 degrees in the alleyway that was less than 30-feet wide and with a load elevation of 5.5 feet.

The MOCCS system was configured to promote trailer stability and counterweight securement with the ability to stab inside the exchanger, lift out in a very tight area and rotate the shell 90 degrees for transport out of the unit for offloading. The sum total of the overall tool satisfied the overarching requirement of safe operations in a live unit.

“The system was configured while utilizing the safety feature of each individual system,” Carroll said. “The combination of each piece of equipment brought precision to the operations, whether it was the PSTe and turntable integration or the MOCCs system with all of the standard safety features of precise counterweight location taken into account. The system is mobile, modular and maneuverable delivering safe operations. And on top of it all, it looks like a tank.”

Using a 90-ton capacity rough terrain crane, the Barnhart team unpacked its trailers and assembled the M3A1 in about five hours.

“The combination of each individual tool allowed for an elegant assembly of the system, with only a crane and no other equipment or stands,” said Carroll.

Once the refinery team had disconnected the flanges and prepared the shell unit for removal, the Barnhart team rolled the M3A1 down the street and into the unit.

“We assembled the M3A1 in a laydown yard, travelled into the unit, stabbed the exchanger shell, removed the shell from its unit and placed it on a trailer,” said Carroll. “We rotated the turret, steered the trailer into position and extracted the shell within an hour. This process was meticulous – a delicate sequence of raising/lowering/backing/rotating – ever-so-slowly, carefully, dodging live pipes and structural steel.”

The replacement process was followed in reverse.