With a large fleet of cranes, Barnhart Crane & Rigging is often called on to perform multi-crane lifts. Such was the case for a project at the Bristol Motor Speedway in Bristol, Tennessee, USA. With a capacity of 162,000, the speedway is the fourth largest sporting venue in the United States and the eighth largest in the world. 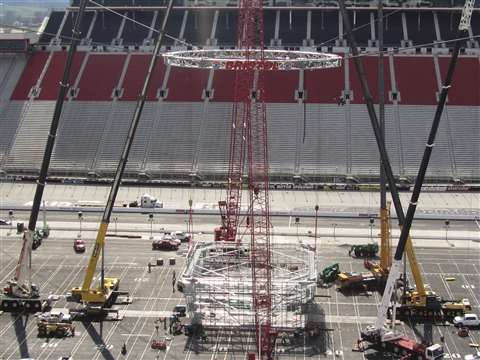 The halo was suspended from the center of the cables and the gondola cage structure holding the video screens hangs below the halo.

When the decision was made to host a college football game at the race track, changes had to be made to the stadium, including the erection of a new suspended score board and video screen.

The plan was to install the world’s largest four-sided video screen. Each side measured 63 feet wide and was 30 feet tall. It was dubbed “Colossus TV.”

“The question prior to installation was how to suspend a 300,000-pound structure in midair across a gap that was nearly a quarter of a mile wide,” said Eric Barnhart, project manager and lead engineer. “We were contracted to erect the towers, install the cables and assemble and secure the scoreboard support structures, the halo and the gondola.”

Barnhart’s team sketched out a cross section of the arena with a tower on each side outside the perimeter of the arena with an approximately 650-foot cable stretching between the towers. The halo would be suspended from the center of the cables and the gondola cage structure holding the video screens would hang below the halo.

The engineering plan changed several times as the Barnhart team kept coming up with better ways to execute the job. They needed to assure the bleachers or suites would not be damaged during the erection of the cables and video system. The cable was fragile and couldn’t be dragged or be subjected to damage. Barnhart engineers developed a solution to meet all those challenges.

“Our first big challenge was the installation of those cables,” said Barnhart. “The big problem being 3.5-inch diameter wire ropes that are something like 26 pounds a foot needed to be carried 350 feet over the grand stands, bleachers and skyboxes to attach to towers that are 350 feet tall and 600 feet away from the center of the arena.” 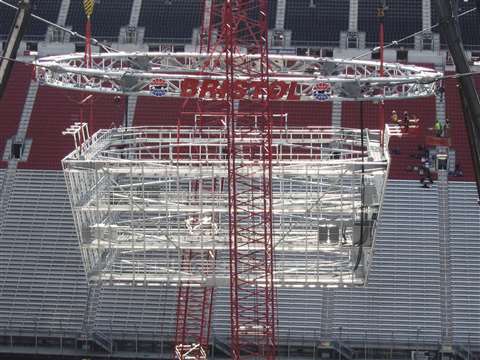 The huge and heavy gondola cage that holds the video screens was built at one side of the arena and then lifted onto a sliding system to position it under the halo. This lift required four cranes working in unison, the two Triple 9s and two Grove GMK 6350s. Additional cranes held men in man baskets.

Barnhart’s team actually built a scale model of the arena to visualize all of the clearances. Once they had developed an engineering plan, they also had to adapt to doing the job in the winter and quickly. The contract was awarded in December and it would need to be completed by early April for a scheduled NASCAR race. Crews worked in cold, ice, wind and snow.

Safety was a top priority for the job and involved mandatory use of PPE, daily JSA meetings and three-way communications for operating in sync about a quarter mile apart.

Custom tools were created in Barnhart’s fabrication shop. The Barnhart team built tower adapters that bolted a temporary cable system. They developed a system that would pull and tension the cables that were 200 feet in the air, and they created a forklift adapter that allowed the cable to be unspooled on carpet and then suspended in the air.

The job began with the erection of the four 200-foot towers, one at each corner and outside of the stadium. Winches were placed at the base of each tower and “messenger and pull cables” were run to use to suspend the actual infield cable. Barnhart’s custom designed tower adapters, forklift adapter and hydraulic cable tensioning system would be used to complete the complicated process.

Then next step was to pick up the halo and attach it to the cables at four locations. Two Manitowoc 999 crawlers positioned on the floor of the speedway picked up and lifted the halo into place where it was attached to the cable system. Additional cranes were used to suspend men in man baskets to secure the halo to the cable system. 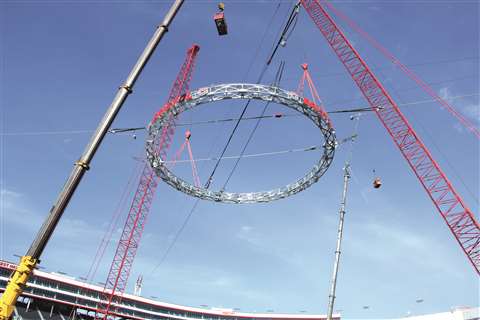 Two Manitowoc 999 crawlers positioned on the floor of the speedway picked up and lifted the halo into place. It was then attached to the cable system at four locations.

The huge and heavy gondola was built at one side of the arena and then lifted onto a sliding system to position it under the halo. This lift required four cranes working in unison, the two Triple 9s and two Grove GMK 6350s. Additional cranes held men in man baskets. The four cranes slowly lifted the gondola to meet up with the halo and it was carefully attached. The four video screens were then lifted and attached to the gondola.

The crawlers were provided by ALL Erection and Barnhart provided the two Grove ATs plus the additional all terrain and rough terrain cranes from its fleet.