Barnhart installed a silicon reactor for their client, Evonik, in late March of 2017 – a journey that took them through incredibly tight spaces and ultimately up a vertical shaft for securement on the second floor of a manufacturing facility. While installation options were limited, a Navisworks model was eventually provided to Barnhart with the reactor’s final location, which revealed that a path through the facility was possible – but just barely – with many immovable obstructions. 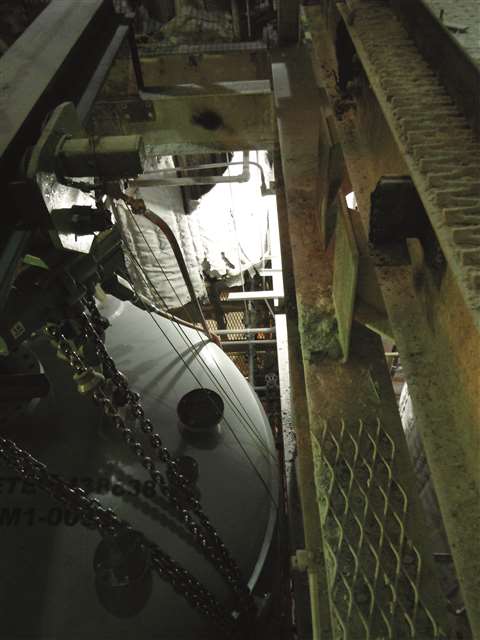 “The big question was, what type of transport and rigging system could we use given the vertical and horizontal challenges everywhere,” noted Brian Thomas, vice president, business development at Barnhart.

Two key moves, in fact, involved right-hand turns with as little as 1.8 inches of clearance. And once the reactor (46,000 pounds, 11 feet 5.5 inches in diameter and 18 feet 11 inches tall) snaked its way through the facility, it had to be tailed to vertical – with the model showing less than three inches of clearance. And the plant needed to stay in operation!

The solution: modify the shipping frame to lower overall height to be able to use traditional rigging tools, and lift vertically as high as possible using standard chain hoists.

This solution would add a means of transport to the shipping saddles to keep the reactor as low as possible while staying within the horizontal constraints of the travel path. At the erection area, the reactor would be tailed to vertical and hoisted to its final set location.

“But the reactor was not designed to be lifted from the bottom,” explained Thomas. “There was minimum clearance above its final set location, which required a low-profile hoist system that could only take it so high. So, we had to jack from underneath.”

Ultimately, the reactor was hoisted vertically as high as possible, using the Barnhart-designed low-profile hoist system. The jackup tower (which fit under the reactor by just two inches) then took the load – at which point the hoist system had to be removed so the reactor could then be pushed up from underneath to its final set location.

“Additionally, the jackup tower had its own setup challenges, given the tight clearances,” said Thomas.

So, roller support frames were added outboard from saddle to saddle, which didn’t add to the overall height or width of the reactor. The low-profile system was accomplished by using two 16T air hoists with trolleys (from Lifting Gear Hire) – supported by W8 beams that were supported on temporary 16.5-inch stub columns.

The stub columns (welded into place) and the column height were tall enough to pull the reactor up with only a link and a half of chain to spare. Barnhart also collaborated with the reactor manufacturer to develop a jacking frame that could be partially disassembled during tailing and then reinstalled for jacking operations. 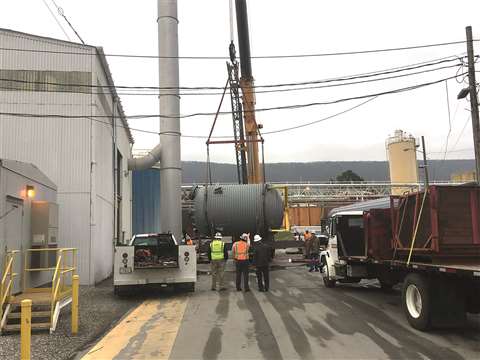 From unload to installation, Barnhart’s self-named ‘Pull-up and Push-up’ job was a battle of wits and a game of inches.

“It added needed stability with connection points up the side of the reactor, and those were oriented around the reactor at the same locations of its support haunches so it would stay within the overall envelope of the reactor,” said Thomas.

“The jackup tower consisted of our Lift Systems 44A gantry, proving to be the perfect tool,” said Thomas. “Once past the low-clearance process pipe, header beams were installed for even distribution of vertical lift, secured with C-clamps.”

Ultimately, the jackup tower lifted vertically from underneath, relieving the load from the chain hoist. The reactor was pushed up vertically with watchmen on all sides and in constant communication with the lift director and the operator – with anyone able to call an “All Stop.”

At final elevation, Barnhart installed the support steel, and the reactor was lowered and secured. The jackup frame was removed and Barnhart demobilized – beating the proposed installation schedule by 50 percent.