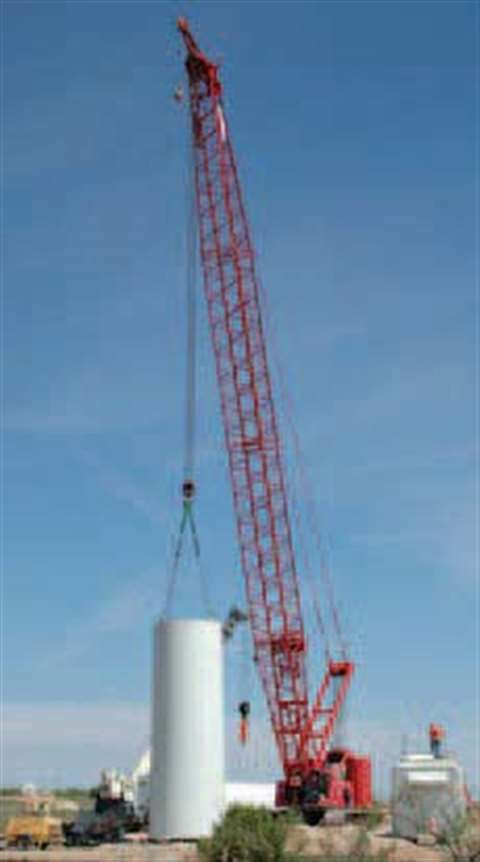 Deep in the heart of West Texas, the rugged terrain has been punctuated by sleek, high flying wind turbines. On the horizon, the white whirligigs twirl fervently, generating more than just electrical power, but also enthusiasm among a long list of business entities focused on reaping profits from this new type of harvest. Wind farms in West Texas continue to be the new “big thing,” especially since the revelation in August that Texas overtook California as the nation's top wind energy state.

Moreover, wind power is a big deal throughout the country. Wind energy installations now exceed 10,000 megawatts in generating capacity, a huge milestone, according to the American Wind Energy Association (AWEA). The organization also reports that with hundreds of wind farms under construction in the US, wind turbine manufacturing companies have recently opened facilities in Iowa (Clipper Windpower), Minnesota (Suzlon), and Pennsylvania (Gamesa). “Wind turbine orders are creating jobs all the way down the supply chain, sometimes in areas that do not have a large wind resource, such as Louisiana,” the organization says.

The crane and transport sectors are among the industries that are benefiting from the investment in and proliferation of wind power generation in the US and Canada. “Even if there is a downturn in the economy, the good thing about the wind business is that the demand will continue,” says Butch Robertson, who specializes in renting cranes to the wind power industry for Buckner HeavyLift. “Wind projects have been a great way to keep our big cranes busy year-round.”

With a fleet of 13 Liebherr LR 1400s, and nine Manitowoc 999s, Buckner is a well known player in the wind turbine erection business throughout the US and Canada. Robertson says his company has currently or has had cranes working on wind farms in Texas, Arizona, California, Washington, Oregon, Oklahoma, Kansas, Montana, Wyoming, Colorado, New Mexico, New York, Iowa, Pennsylvania, North Dakota and Illinois as well as in Canada.

Among the biggest issues for crane rental firms pursuing wind farm work is supplying the cranes that are in such high demand. Among the biggest issues for wind farm contractors is procuring the cranes and experienced operators, and also getting the wind turbine components, ranging from the turbines themselves to the related power transmission equipment. The strong demand for wind turbine components has the manufacturers of this equipment ramped up beyond capacity, with some estimates that turbine manufacturers are sold out for the next four years. There's quite a bit of finesse involved in assuring that a site has components to erect and the cranes to erect them.

And then there's the weather issue, according to Buckner's Robertson. Obviously, because wind farms are located in areas where the winds are typically high, crane operation must be carefully monitored in order assure safe operation. Often work must be shut down on a wind farm when wind speeds exceed the limit for safe crane operation. As well, rain can be an issue, especially compromising when foundation work is being completed.

Among the wind farms on which Buckner has cranes, the LR 1400 is most often the centerpiece machine. For most turbine configurations, Buckner will typically outfit its LR 1400s with 253 feet of main boom and 57 feet of fixed jib at a 10 degree offset. The crane has 342,000 pounds of superstructure counterweight and 95,000 pounds of carbody counterweight, Robertson says.

While the Liebherr LR 1400 is used to erect the upper most portions of the wind turbines, a smaller crane generally is also on site to erect the lower and mid portions of the turbines, Robertson says. In the case of Buckner HeavyLift, they often supply a Manitowoc 999 to accomplish these tasks. Often smaller RTs are used to complete foundation work and help the larger cranes with the erection process. However, the process for erecting turbines and the cranes used differs from one project to another, based on the turbine manufacturer, terrain, crane rental company fleets, availability of cranes and other factors.

Robertson says that Buckner's Manitowoc 999s that are used on a wind farms are rigged to set the lowers and mids to a height of 160 to 200 feet, far less than its rated capacity. The beauty of the 999, according to Robertson, is that it can move between foundations easily, even on rugged, rocky terrain. In a normal situation, when all the wind turbine components are available and the cranes are ready to work, a contractor can erect 120 turbines in less than six months and then move on to the next project.

Ironically, as the investment in wind energy continues to grow, and is spurred by government tax credits and a prevailing mindset to lessen the country's dependence on oil, the effort to develop a wind farm becomes more complicated. Wind farm engineers are developing new foundations that are stronger and easier to construct, while wind turbine manufacturers are designing more powerful turbines to generate even more power.

Typically, wind turbines in the US are smaller than those used in Europe, although developers expect larger and taller turbines to be the trend. Turbines used in the US are typically one or two megawatts, while some European manufacturers are producing 5 MW units. The larger turbines being erected in Europe are presenting significant challenges to transport and erection contractors. Coupled with the component size, weight and height, wind farm sites on land are often in remote locations at higher altitudes, which make access difficult, both to the site and to travel between individual turbines.

In the US, wind turbines for land-based wind farms have rotor diameters ranging from about 164 feet (50 meters) to about 295 feet (90 meters), and with towers of roughly the same size. At the larger end of the category in the US, a 295 foot (90 meter) turbine would have a total height from the tower base to the tip of the rotor of approximately 442 feet (135 meters).

Thus far, Buckner's Robertson says the Liebherr LR 1400/2 has been the machine of choice on wind farms in the US. “That's been the machine we've had the most success with although we think that as turbines get larger and taller we will see the LR 1750 emerging as the crane of choice.”

Conversely, Terex-Demag and Manitowoc cranes are doing their fair share of erecting the turbine uppers, with the Terex-Demag CC 2800-1 NT being the turbine erection specialist for that manufacturer and the Manitowoc 16000 that company's leading wind tower crane. The Manitowoc 999, the Link-Belt 348 and the Kobelco CK2500-II are among the more popular cranes for setting the lower sections of the turbines in the US.

Marco Crane rents cranes to wind farm contractors throughout the Southwest and West, from Texas to California, according to Dan Mardian. The company's Link-Belt 348 works on wind farm projects throughout West Texas, including in the Sweetwater vicinity, which has a large concentration of wind power plants. “My only concern about the wind power industry is that if the government subsidies were not there, would this still be viable work?” Mardian asks. “Right now there is a lot of work in the wind business so we're keeping the cranes very busy.”

Virtually every crane rental company in the nation is likely involved in or at least looking at wind work as the demand for cranes in this sector increases. Steve Burkholder with JF Lomma in Pennsylvania says that demand for the Liebherr 1400 and the Manitowoc 16000 far exceeds what is available in the US. He says cranes that are on order are already booked.

“We have a Manitowoc 16000 on order,” says Burkholder. “We have people calling looking for Manitow 16000s for wind work but there aren't any available.