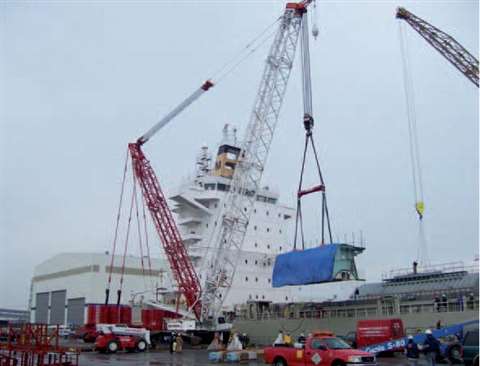 A Bay Crane Liebherr LR 1400 being used to lift cargo

Six of 10 new Liebherr cranes have been delivered over the last few months, ordered by New York-based Bay Cranes, according to its president, Kenneth Bernardo. The order included two LR 1400, four LR 1300 and four LR 1200 lattice boom crawler cranes. The company is set to receive the final four LR 1300s, a new model, in the first and second quarter of 2007.

“This represents a substantial investment and highlights the strong relationship between Liebherr and Bay Crane,” said Bernardo. “Working in New York has additional pressures and demands, and the Liebherr team has historically supported us 24 hours a day, seven days a week.”