Rigging and installing refinery co-exchanger units requires precise, engineered planning and extreme know-how. Bay Ltd. works in this realm frequently, although no two jobs are alike. They almost always involve a huge piece of equipment that has to be navigated and installed in tight quarters

in a tight timeframe.

Bay Ltd. received the exchanger from the railsite at its dock facility. It was offloaded and hauled to Bay’s crane yard for dress out. Once it was rigged for installation, Bay crews utilized its 18-axle Nicolas modular transport system to transport the unit two miles to the refinery in Corpus Christi. 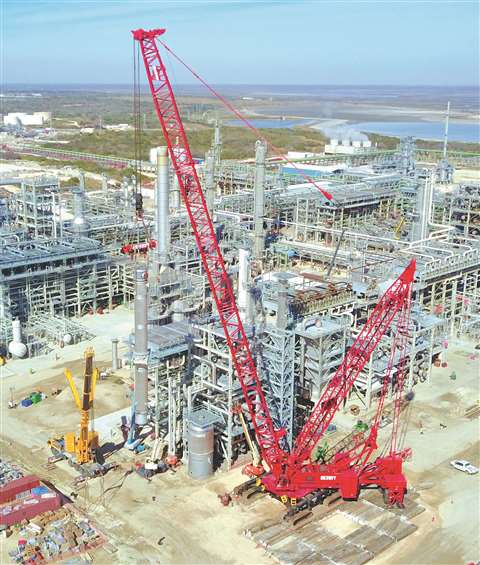 The primary lift crane was Bay’s Manitowoc 21000 with MAXER and rigged with 240 feet of boom and 140 feet of mast.

Once it was in place for the vertical installation, Bay Ltd. used its Manitowoc 21000 with MAXER as the primary lift crane. It was rigged with 240 feet and 140 feet of mast. The tailing crane was Bay’s Liebherr LTM 1400-7.1 with the TY guying system in the super lift configuration. It was rigged with 202 feet of boom.

A sophisticated spreader bar system was designed to lift the exchanger to the required height.

“Bay Ltd. reached out to Eddy Kitchens at Engineered Rigging to come up with a concept for the spreader bar,” said Ruben Calderon, project manager for Bay Ltd. “Once the concept was agreed upon and engineered, Bay Ltd. then built the spreader bar in-house as we are an ASME Section 8 Division 1 and Division 2 fabrication shop.”

The spreader bar was then sent to Jordan Hamilton at Holloway Houston for final load testing.

Knowing that the spreader bar system would be a valuable asset in its rigging gear inventory, Calderon said it was ideal to accommodate the heavy lift canes that Bay had recently purchased.

“In the past three years, we have purchased one Manitowoc 21000 and three Manitowoc 18000s,” Calderon said. “This spreader bar will work with all of these cranes.”

Bay also purchased Holloway’s Hammerhead Plasma 12-strand slings for the top and lower rigging of the primary spreader bar in order to allow for maximizing capacity with a lower weight for rigging than conventional wire rope slings, he said.

There were many hurdles to overcome in the final and safe performance of this project, Calderon said.

“Coordination between the fabricator, freight forwarder, rail company, owner and the jobsite to ensure that all equipment and personnel were readily available was a challenge,” he said.

“The engineering and installation of the matting pad under the crane as well as the scheduling of the crane and spreader bar required a lot of planning and execution.”

From start to finish the project took eight months. The rail car arrived on September 8, 2017 and it was fully erected by July 6, 2018.