While museums may appear to be static, they are constantly evolving. Curators are always looking at ways to keep museum exhibits interesting and appealing. As well, many artifacts need to be periodically restored. The Covid-19 pandemic shuttered a lot of museums and offered the opportunity for updating and restoring exhibits. 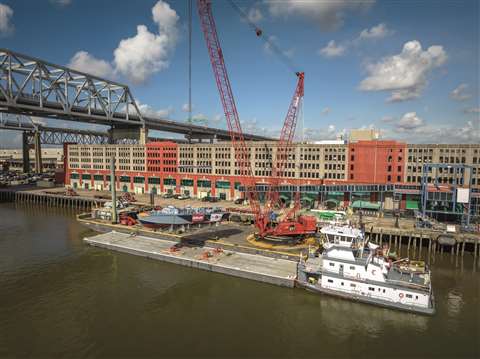 A barge and tugboat were donated by Canal Barge company for the 6-mile journey from the Industrial Canal to the Port of New Orleans Cruise Terminal where the PT-305 was transferred back to the SPMT via a Manitowoc 4100 ringer crane on a barge provided by Stewart Construction.

Such was the case for the National World War II Museum in New Orleans, which features one of the most expansive collections of artifacts and first-person oral histories of World War II. The museum features interactive experiences and is designed to give patrons new ways to connect to history and to honor the men and women of the armed services who assured our freedoms.

The museum features more than 250,000 artifacts including war documents and weapons as well as restored aircraft and vessels that were used in combat in Europe and the South Pacific theaters.

In 2016, the iconic PT-305 patrol boat was restored and moved from the World War II Museum restoration pavilion to Lake Pontchartrain by Berard Transportation. The old boat was in working order and routinely gave rides and tours on the lake, the same lake she was tested on before heading out to battle. Shortly after the start of the Covid-19 pandemic, the Museum moved PT-305 to storage. 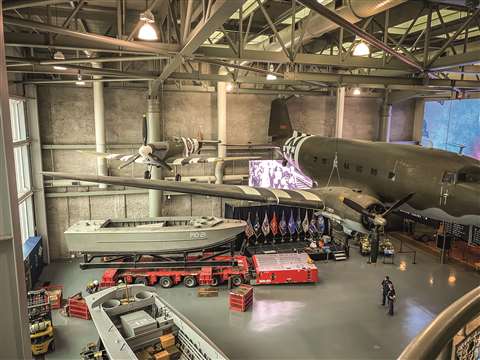 Berard moved several other military vehicles within the museum.

Finally in July, the boat was brought back to the main museum campus in downtown New Orleans. Again, Berard participated in moving the boat by barge and then over the road through the streets of New Orleans to the Museum.

“In 2016, the Berard team moved her from the museum to the river and eventually Lake Pontchartrain, where she was available for rides and tours,” said Brett Berard, vice president of operations at Berard Transportation. “She is now back at the main museum campus for easy access tours.” 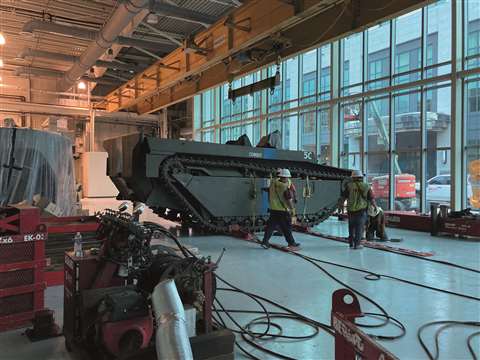 A 400-ton low profile Hydra-Slide skid system and a Jahns Structure Jacking System were used for moving an Amphibious Vehicle Tracked LVT within the museum.

The PT-305, also known as the USS Sudden Jerk, is 78 feet long and weighs 43 tons. (When fully armed and loaded the torpedo boat clocked in at 56 tons.)

A barge and tugboat were donated by Canal Barge company for the 9-mile journey from the Industrial Canal to the Port of New Orleans cruise terminal where the PT-305 was transferred back to the SPMT via a Manitowoc 4100 ringer crane on a barge provided by Stewart Construction. Versabar provided the spreader bar lift system used to lift the boat from the barge to the SPMT.

“I’m honored to be responsible for moving the Higgins PT-305 boat a second time,” said Berard. 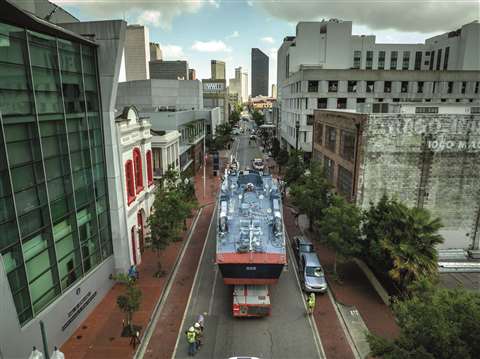 Besides the PT-305, Berard moved other military artifacts around the museum, including a LVT and LCPL. The Berard team used a 6-line Goldhofer PST-SLE transporter to move the Higgins LCPL between museum buildings.

A 400-ton low profile Hydra-Slide skid system and a Jahns Structure Jacking Systems unified hydraulic jacking system were used for moving an Amphibious Vehicle Tracked LVT). The LVT is an amphibious warfare vehicle landing craft used by the U.S. Navy and the U.S. Marine Corps. These vehicles were famous for unloading tanks and jeeps from ships on D Day. Built solely as cargo carriers for ship-to-shore operations, they evolved into assault troop and fire support vehicles during the war.

“This isn’t work when it’s this fun,” said Berard.

It is believed that only four combat veteran PT boats still exist in the U.S., and there’s only one that is fully restored and operational, the PT-305. Patrol Torpedo or PT boats were a crucial asset in World War II. 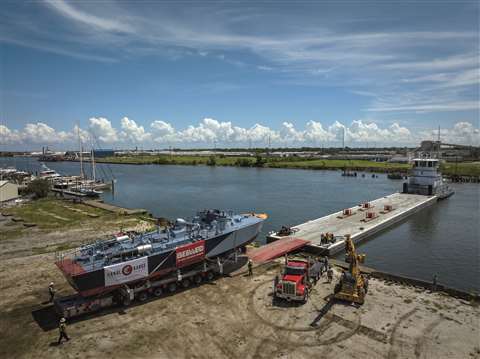 Used by the U.S. Navy, they were small, fast and inexpensive to build. They were credited with sinking many enemy ships and the Japanese armed forces nicknamed them “the mosquito fleet” and “devil boats.” PT squadrons were revered for being daring, attack vessels.

Developed by Higgins Industries in New Orleans, some 200 of 531 PT boats were built during the World War II era. Higgins also designed and built other watercraft, including the famed Landing Craft Vessel Personnel, LCVP, which ferried troops to shore from ships.