Berard Transportation hauled a delicate piece of naval history through the narrow and crowded streets of New Orleans.

Bridging a 74-year gap between the past and the future, Berard Transportation played an influential role in bringing an historic U.S. Naval artifact back to life.

In 2013, the National World War II Museum contacted Berard about a special project to move a fully restored and operational Patrol Torpedo boat (PT-305) – nicknamed Sudden Jerk – from the museum’s restoration pavilion to the Mississippi River. Today the boat is a fully functional exhibit on Lake Pontchartrain, where guests can ride across the waves at over 20 knots, just as soldiers did across the Mediterranean Sea in 1943. For the U.S. Navy, the PT boat was a critical asset during World War II, especially after the bombing of Pearl Harbor when the United States was short on larger vessels and facing an onslaught of attacks in the Pacific and European theaters. The actions of PT boat crews in the Philippines and Solomon Islands represent a compelling example of the American Spirit in action. These boats were also served during the D-Day invasion, patrolling beaches and forming a barrier against German S-boats. Fast and agile, the PT boat was torpedo armed and utilized as a fast-attack craft.

Onlookers lined the streets to witness the transportation of this significant wartime artifact.

This project to move the restored PT-305 spanned the course of 10 years and involved complete restoration of the vessel. Once restored and ready to be hauled to the river, Berard’s team took the helm. The first operation was determining the weight and center of gravity of the vessel. This information would be needed for transportation logistics, rigging design, crane lift planning and barge transit calculations. The route involved transporting the boat through New Orleans’ warehouse district, past the convention center and to the Erato Street Cruise Ship terminal.

“This is a very special project for the Berard family and the National WWII Museum in New Orleans. A piece of American history – Patrol Torpedo Boat 305,” said Brett Berard, vice president of operations at Berard Transport. “This wasn’t just any cargo, this cargo had a role in changing the world forever.”

The boat was restored as closely as possible to original drawings and included the use of three hand-restored Packard V-12 engines. However, the boat was upgraded to current U.S. Coast Guard standards to allow passengers. Berard was tasked with weighing the boat, jacking the boat within the restoration building to transport height, navigating the boat out of the building, travelling on city streets

to the launch site and securing the boat onto a deck barge for transit to the lake testing site.

“Returning PT-305 to Lake Pontchartrain is truly a sensational feeling; we’re all thrilled that she’s finally back on water, and we couldn’t have done it without the tireless work of our volunteers,” said Stephen Watson, WW II museum executive vice president and COO. “Last November, we watched her ride downriver toward the next chapter of her life. After she completed sea trials, we moved her to a beautiful boathouse equipped with a dedicated training space, workshop and boat-side exhibit area. By restoring and preserving PT-305, the Museum can now offer new generations an even deeper connection to the ‘Greatest Generation’ – the chance to actually walk, and ride, in their footsteps.”

A huge round of applause erupted once the boat was successfully positioned outside the building. Departing the Museum also involved the most challenging turn of the entire route. There were mere inches of clearance between signal light posts. The boat then traveled through incredibly congested streets – cars, equipment and dumpsters along the route made maneuverability critical. Once the team arrived at the dock, a crane lifted the vessel from the dock to the barge. Once on the barge, the boat was secured by Berard’s team and delivered to a local shipyard for final outfitting and launching into the water. 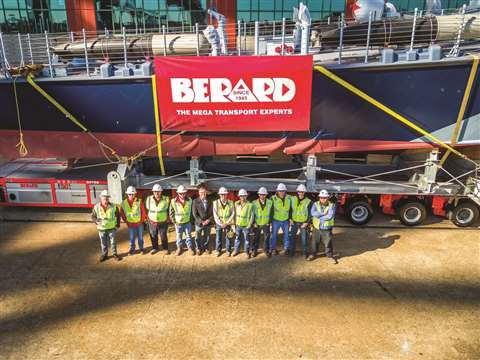 Berard’s team provided its services and equipment free of charge.

A labor of love

Berard donated all services associated with the project by providing load cells to weigh the boat and determine center of gravity, jacks to lift the boat onto the transporter and an eight-axle Goldhofer PST-SLE transporter to move the boat. Berard also executed securing and lashing operations of the boat on the deck barge. Other donated equipment and services included a deck barge provided by Canal Barge, a tugboat provided by Marquette Transportation, lifting gear provided by Versabar and a floating crane provided by Coastal Cargo of New Orleans.

The priceless cargo was built by hand with 105,000 volunteer man-hours. Transporting the huge vessel through narrow and crowded streets required careful and expert planning. Berard was also tasked with convincing other vendors to donate their services to provide a turn-key and efficient complete project solution.

With “parade-like” crowds, the Berard team’s safety plan assured that all employees and spectators were safe during the move.

“The entire Berard team was very proud to be a part of this project,” said Berard. “An amazing team preserving a great piece of American history. Family and crew members not assigned to the project came out to support their colleagues by witnessing the parade and festivities.”