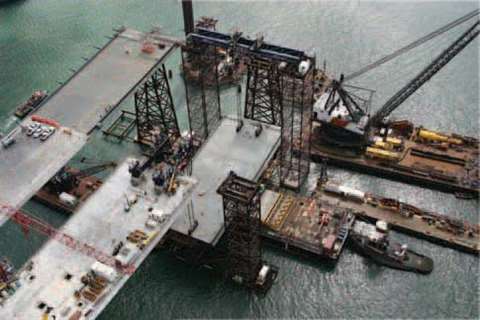 Bigge Crane &amp; Rigging was asigned the task of lifting and installing the second span of new San

Bigge Crane & Rigging recently installed the second of a pair of 2,000 ton steel bridge deck sections on the New San Francisco Oakland Bay Bridge. The second mega-lift operation completes the transition spans between the concrete Skyway bridge on the Oakland side and a suspension bridge – not yet built – to Yerba Buena Island.

Installation of the second span took about 10 hours in an overnight operation in late August. Each transition span section – called tubs – was lifted to a height of approximately 200 feet within tolerances of 1/32 of an inch. Again, Bigge used computer-controlled Hydrospex strand jacks for each lift, with the strand jacks raising the load at speeds of up to 30 feet per hour. During the lifts, the tubs were maintained with an eighth of an inch of the required altitude. Given that the tubs are 200 feet long by 85 feet wide, computerized monitoring was essential.

Each tub was lifted from a barge used for transport from Portland, OR, where they were fabricated. As with first span, a temporary support tower has been skid under the span to hold it in place for three months until the concrete joint with the existing Skyway is poured and cured, filling a gap of some 6 feet. The San Francisco (west) end of the tub is being supported by another temporary tower until the suspension bridge is constructed.

“To lift a 2,000 ton load that is 200 feet long and 85 feet wide to a height of 200 feet is an operation that requires precise engineering and thorough planning,” said Weston Settlemier, president of Bigge Crane & Rigging. “To do it twice is something special for us. As a local company, we are very proud to have made such a contribution to this project.”

Settlemier noted that his grandfather Henry Bigge, who founded this company 90 years ago, hauled the steel that built the Golden Gate bridge in the 1930s. “I am delighted that the tradition of Bigge's involvement in the construction of iconic structures in the Bay Area continues today,” he said.

The New Bay Bridge is expected to cost $6.3 billion and be completed in 2012.