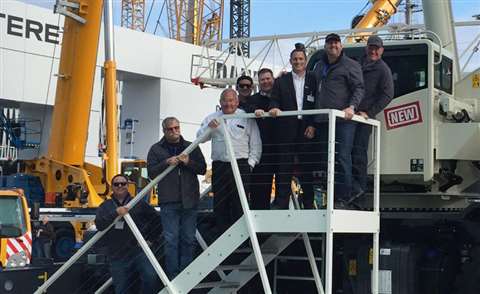 Terex Cranes honoured Bigge Crane & Rigging, based in San Leandro, California in the US, with a ceremony recognizing the company’s 100th anniversary at its stand at Bauma. Bigge ordered 12 units of the new RT 90 rough terrain crane, which was formally launched at the huge construction equipment tradeshow in Munich.

The new 80-tonne capacity (90 US tons) Terex RT 90 rough terrain crane features an enhanced control system with integrated diagnostics, a redesigned cab with an 18-degree tilt and an easy access flat deck for improved visibility, according to Terex.

The five-section, full hydraulic boom of the RT 90 stretches 47 metres (154 feet) for long reach applications, and the unit’s multi-stage outriggers are designed for a variety of outrigger positions. Transporting and operating costs are reduced due to the RT 90’s narrow width of 3 metres and central lubrication system, Terex said.

“We are thrilled to add these RTs to our extensive fleet to continue serving our customers with the best equipment for their jobs,” said Bigge Crane & Rigging President Weston Settlemier.