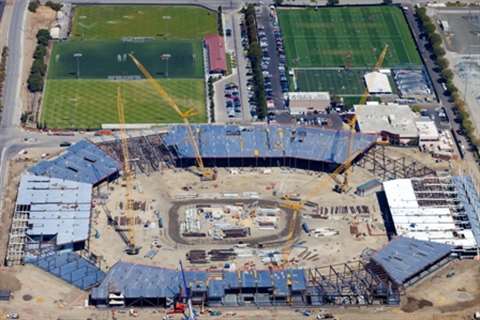 For erecting the steel structure, the four LR 1300s were provided by the San Leandro, CA-based Bigge Crane and Rigging Co.

Construction on the new NFL San Francisco 49er stadium is progressing with four Liebherr LR 1300 crawlers doing much of the structural steel lift work on the new Santa Clara stadium. This stadium, a joint venture project of Turner Construction and Devcon Construction, was designed to rank among the best outdoor sports and entertainment venues worldwide, according to a press release.

The stadium is set for completion in time for opening day of the 2014 NFL football season.

The cranes are working in a two-shift operation in order to complete the framing quickly. Each of the four cranes is lifting 50 steel sections per day. They will be operating simultaneously and continuously on the jobsite for approximately five months.

“High output, full power and multifunctionality are trademark characteristics of the LR 1300 crawler crane,” says Bigge’s Joe Nelms. “Due to these attributes it is the perfect crane for this job.”

In the first construction phase, more than 3,000 piles were drilled; 30 miles of utilities, cables and pipes were laid underground; and approximately 10,000 cubic yards (7,600 cubic metres) of concrete were poured by 400 workers. By mid September, about 15 percent of the stadium was finished.

The $1.2 billion stadium with a total capacity of approximately 68,500 spectators will cover 1.85 million square feet. It is designed to be a multi-purpose facility, hosting a wide range of events such as domestic and international soccer, college football, motocross, concerts and various civic events.