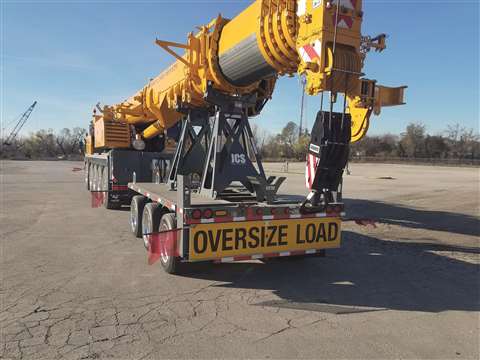 One of Nelson’s newest option is an outrigger pad storage rack for round outrigger pads.  When the ramp is rotated to the travel position the outrigger pads are automatically secured for travel.

Boom dollies are a critical tool for moving cranes from the yard to the job legally and safely. “Crane boom carriers continue to be an important piece of equipment for crane operations,” said Tony Niese, president, Nelson Manufacturing. “The correct boom dolly can allow the user to get to and from the jobsite safely, legally and efficiently.”

With the costs of building and maintaining the nation’s highway infrastructure rising, bridge and weight laws are being enforced more strictly.

“A dolly is so important to the industry because it makes it possible to spread the weight over more axles allowing for street legal transport of many all terrain cranes up to 550 tons capacity without having to launch and transport the boom on a separate trailer,” said Crystal Dieleman, president, Transworld Manufacturing. “In many cases, the outrigger boxes, swing-away jib, block, ball and partial counterweight can either be left on the machine or stowed on the dolly.”

“One of the newest options is an outrigger pad storage rack on the rear of the dolly that allows round outrigger pads to be rolled up into the storage rack via an integral ramp, and then when the ramp is rotated to the travel position the outrigger pads are automatically secured for travel,” said Niese. “This feature can save the operator time in both the set up and tear down of the crane.” 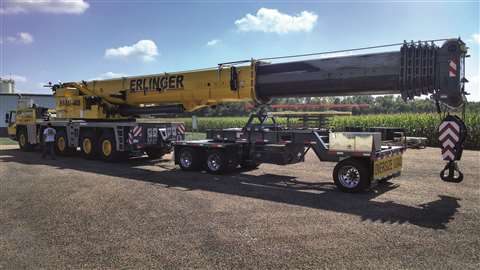 Rolling tower dollies are gaining popularity because they increase crane operator productivity and efficiency by being much quicker to connect to the crane boom.

Efficiency is not something everyone thinks of when a boom dolly is discussed, Niese said.

“Nelson works directly with the crane manufacturer, crane dealer and crane user to ensure that we are equipping the dolly in a manner that will work most efficiently for the customer,” he said.

One of the Nelson crane boom dolly styles that is popular in Canada and that is gaining popularity in the United States is the rolling tower dolly.

The connection procedure is simpler and more efficient versus a standard dolly which pins to the boom only, Niese explained.

“The operator connects to the crane by backing into the dolly drawbar hitch,” he said. “In most cases the crane will have an automatically locking pintle hitch. The boom is then swung over the rear of the carrier and the rolling tower is positioned as needed with a hand crank on the side of the dolly to line up the connection points. The connection points vary per crane, depending upon the crane manufacturers approved dolly attachment.” 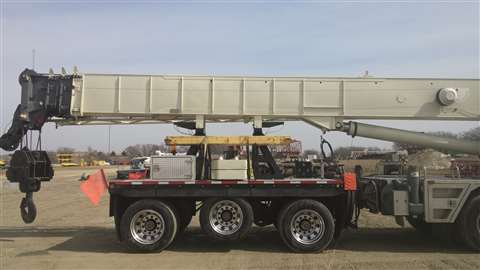 In many cases the crane and dolly are never separated on the jobsite with a rolling tower dolly, especially when doing taxi crane work, Niese said.

“The crane can tow the dolly behind the carrier with the boom swung to the front when on a jobsite,” said Niese. “The dolly can stay connected to the rear of the carrier while the crane completes its picks. This convenient feature greatly reduces the set up and tear down time of the crane. The rolling tower dollies can also be equipped to transport counterweights and other equipment as well.”

The primary purpose of the boom dolly is providing a means to legally and safely transport a crane over the road to get to and from jobsites.

“It is amazing to see how many times that a crane can weigh, for example 135,000 pounds, and the dolly needs to be 400 pounds lighter to meet the axle weight requirements of a particular state,” said Niese.

HMR Supplies manufactures two, three and four-axle crane boom dollies for use in the United States, Canada and Australia. 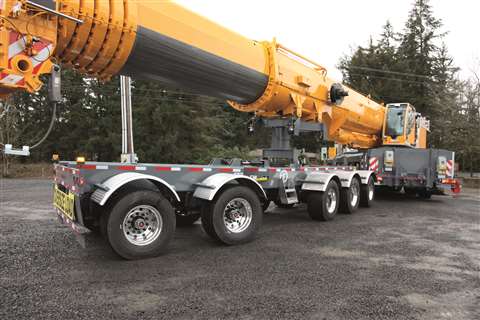 While TransWorld’s number one focus has always been safety, its team has been concentrating on building the lightest boom dolly on the market.

“The wheelbase alone can be anywhere from 5 feet to over 25 feet,” she said. “The longer the wheelbase, the more an articulation point, steer axle, tow bar, or steering system is necessary. Bridge and weight laws specific to each state or province dictate what type(s) of dolly can be employed. In basic and oversimplified terms, that translates to in-line, articulating and tongue dollies.”

End users also influence what kind of dolly is required, and they often times they will select a longer wheelbase to mobilize with additional components, according to Dieleman. 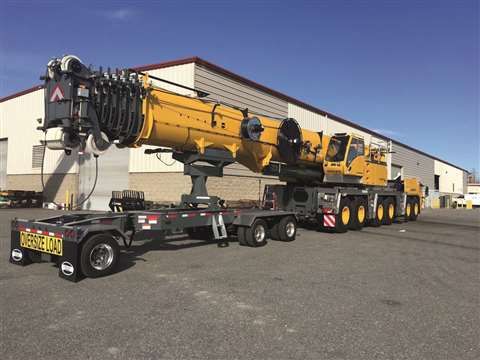 A Greenfield three-axle W3 boom dolly is installed on a Grove GMK6300L.

“TransWorld offers designs that are friendly to virtually all regions and areas,” she said. “While our number one focus has always been, and will always be, safety, our team has been concentrating on building the lightest boom dolly on the market. In an industry obsessed with weight, sometimes even a few pounds can make or break a permit.”

Dieleman said her team has spent a considerable amount of resources developing a high-strength steel frame that cut the weight of the dolly while still maintaining the strength necessary to safely travel when coupled to the crane.

“In July we delivered a five-axle lightweight dolly to NessCampbell Crane + Rigging for the company’s new Liebherr LTM 1400-7.1,” she said. “The dolly had to weigh under 13,000 pounds to legal the crane in Washington and Oregon. We ended up hitting our target and as a result, they can now dolly their crane around the Pacific Northwest which was not possible before.”

As an added bonus, this combination is legal in the seven most western states.

“If you have a multi-million dollar investment, it’s nice to have those options,” Dieleman said.

TransWorld’s most popular models are the long wheelbase, articulating dollies.

“We are also receiving a lot of interest in our lightweight frame dollies and reverse steer system add-on option,” said Dieleman.

Greenfield’s family of boom dollies are driven by the different rules and regulations each region in North America demand, according to Gustavo A. Anzola, sales manager, crane and rigging solutions, Greenfield Products. The most common boom dollies Greenfield produces are the closed couple three-axle C3 and the wide-spread boom dollies three-axle W3 and the four-axle W4. 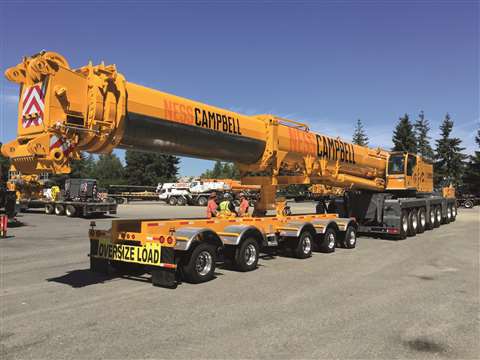 TransWorld recently delivered a five-axle dolly to NessCampbell for its Liebherr LTM 1400-7.1. The dolly had to weigh under 13,000 pounds to legal the crane in Washington and Oregon.

“The three-axle boom dolly C3 is a very common unit and can be utilized with all five and six-axle cranes,” said Anzola. “Our closed couple three-axle dolly has a gross vehicle weight rating of 67,500 pounds with 54.5-inch or 60-inch axle spacing.”

“In some cases, the chassis is equipped with a counterweight bracket option to allow the transportation of counter-weight and maximize the transportation capabilities of the crane and boom dolly,” said Anzola. “This model can be found in regions that allow tridems to carry between 20,000 pounds and 25,000 pounds per axle.

He said the most relevant features of Greenfield’s C3 model are bolt-on towers that can be adapted to its chassis when the boom dolly is needed to be used with different crane models; front access that includes two aluminum step ladders located on both sides of the chassis for easy access to the deck of the boom dolly; stainless steel, corrosion-resistant pins that are grease-free, making them virtually maintenance free; and oversized sign and flags that are DOT approved and come installed from the factory.

The wide-spread boom dolly models W3 and W4 are required in many states with tough axle load laws and are also required with a very long over-bridge – distance between the first axle of the crane to the last axle of the boom dolly, according to Anzola.

The chassis of these units are comprised of two frames, a front and a rear frame. These frames are connected via pins which make the force steering possible. 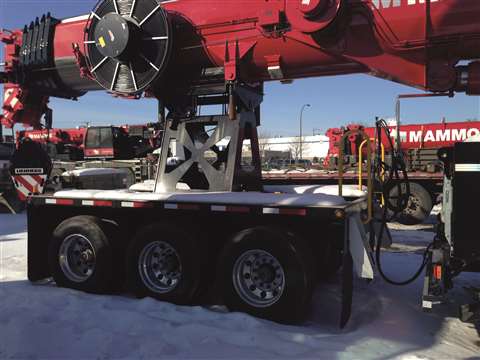 The three-axle Greenfield C3 is a common unit and can be utilized with all five and six-axle cranes. Pictured is a Greenfield three-axle C3 installed on a Liebherr LTM1250 for transport.

“This boom dolly is common in western states such as California, Oregon and Washington,” said Anzola. “Due to the length of the chassis and axle spacing requirements, the tower design on these units pivot front to back thus allowing better travel when going over hills or uneven ground conditions. The towers are equipped with pneumatic cylinders to control or adjust the angle of the tower when it is disconnected from the boom. This feature saves time and makes the connecting/disconnecting procedure more efficient.”

As crane rental companies find ways to carry more accessories, rigging and in some cases counterweight on the carrier of the crane, maintaining the gross weight of the boom dolly to a minimum is always a priority.

“Our wide-spread boom dollies are lightweight and typically designed with high-strength steel and tapered frames to minimize chassis tare weight,” said Anzola. “We work closely with our supplier for lightweight options in areas such as the brakes components, axle beam, suspension and tires.”