According to a recent report published by Global Market Insights, the boom truck market is set to exceed $1.5 billion by the year 2024. Supporting that estimate, when asked to describe today’s boom truck market, Fred Ross, CEO at Custom Truck, termed it as “ripe for the taking.” 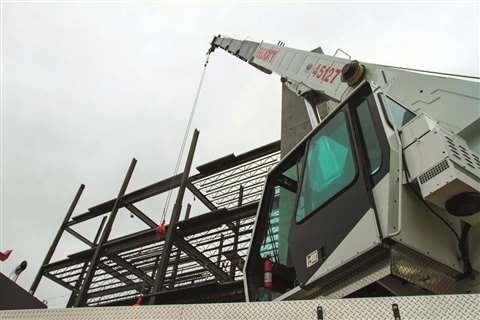 After a period of decline, the boom truck market is making a steady comeback, and dealers across North America are optimistic about the future. ACT spoke with several big-name boom truck distributors who echoed this sentiment.

“[The market] is definitely coming back and we couldn’t be more excited,” Ross said. “We continue to be the leading distributor of boom trucks year after year because we truly believe their versatility on the jobsite and the road provides a superior return on investment for our customers. So, we are thrilled – and not surprised – to see its adoption come back in full swing across many of the core markets we serve.”

The “boom” behind the boom truck market resurgence can be credited to the revival of many of the industries that utilize this versatile machine.

“The industries driving demand within each region vary, and tonnage classes in demand also tend to vary from industry to industry,” Ross said. “The densest forestry markets include the Northeast, East, Southeast, Upper Midwest and Upper Northwest, so we see greater demand for smaller, forestry-specific boom trucks through our facilities in those regions. Custom Truck’s Colorado, Ohio, Indiana, Oklahoma and Texas facilities incur more demand for the higher tonnage boom trucks and wireline configurations when the price for oil meets demand. We sell smaller boom trucks to railroad contractors all over but see greater demand from railroads and contractors everywhere to the north and east of Kansas. We see consistent demand from building supply, construction and electric utility contractors throughout all regions.” 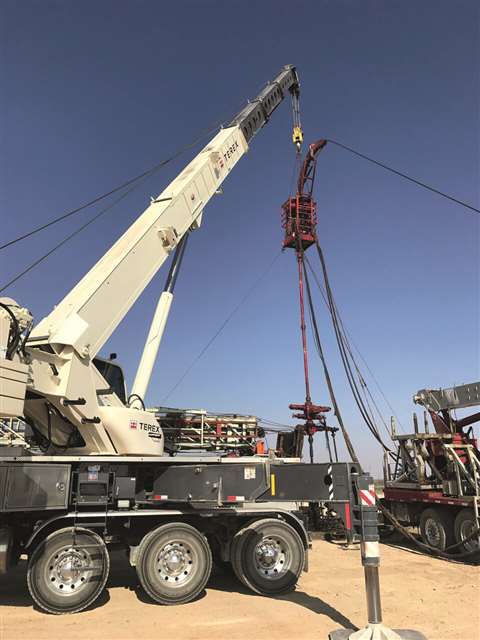 Terex manufactures a wide variety of boom trucks, including the Crossover 8000, which operates with a 126 foot telescopic boom and an 80-ton maximum lifting capacity.

According to Beau Grassl, sales manager at Giuffre Bros. Cranes, while boom trucks are used in just about any place where something can be lifted, industries such as roofing, tree removal, oil fields, steel construction, concrete, well and drilling and general crane lifting services (often referred to as taxi cranes), remain the most prevalent.

“We saw more demand from the oilfield starting last year,” Ross said. “Custom Truck has historically been a major contributor to market supply of 36-plus ton boom trucks, capturing significant shares in this segment. Since demand for heavier tonnage classes follows the trend of crude oil pricing, being what it was around 2016, this tonnage class experienced a lag relative to other boom truck categories. In 2017, it was back to being one of our top performing classes. Since our belief in the boom truck has allowed us to sell, rent and lease them into the array of industries we serve, we aren’t nearly as vulnerable as other distributors when any traditional boom truck industry lags or crashes.”

“The 26-ton and 35-ton capacity seem to be the most popular right now in mid-size units,” Goodale added. “In the swing cab market, the 40-ton unit remains king.”

Giuffre’s Grassl said the mid-size class, 25 to 30 tons, have always been steady regarding demand, but recently there seems to be a trend towards bigger and longer, 40 to 50-ton machines making up the bulk of this increase. Similarly, in 2017, the 26 to 30-ton and 40 to 50-ton boom trucks were the top performers for Custom Truck.

“The 23, 26 and 30-ton machines are the three sizes that National Crane has that are very popular in our marketplace,” said Patrick Runnion, CEO, Runnion Equipment. “We do have some 20-ton and 17-ton [machines], but the vast majority are ranging from 23-30 tons.”

Grassl described the Giuffre fleet as a healthy mix of both small-mid size rental units, which are rented bare, and sale cranes from small to very large. 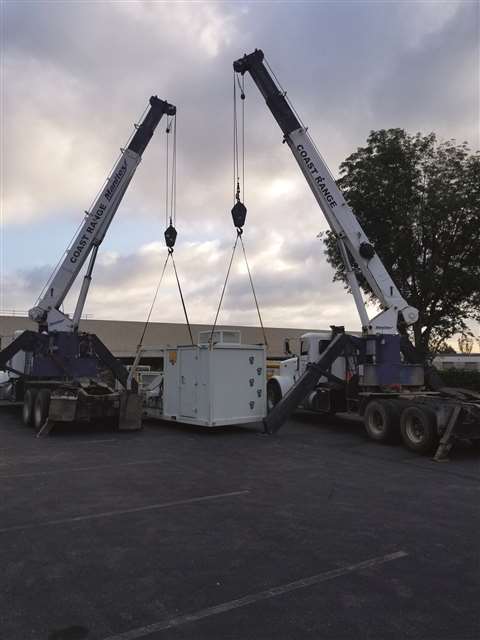 Coastline Equipment has a large fleet of both late and new model boom trucks. At left, a pair of Manitex 2250Ts, rigged with 50 feet of boom, complete a tandem lift.

“We do our best to keep a variety of different units,” Grassl said. “We stay close to the core features that have helped our success over the last 55 years, while continuing to evolve with the current markets conditions and their needs.”

Coastline’s fleet of late model and new boom trucks ranges from 19 to 45-tons capacity and includes behind cab, swing cab and tractor mounts, all CARB compliant to the latest standards.

Diversity in fleet is important, but what exactly makes a boom truck stand out from the rest of the machinery world? Despite an ebbing and flowing market, this machine is reliable and continues to improve with age. It’s a time-honored machine.

“They are typically less expensive than rough terrain and all terrain cranes, and altogether a better option than a truck crane,” Ross said. “Various models of medium or heavy-lift boom trucks can safely lift loads from 15 to 80 tons and operating radii can exceed 100 feet and working heights over 200 feet. Another advantage of a boom truck is that the equipment or material to be lifted by the crane can be transported by the truck, which can travel at highway speeds.

These attributes, paired with Custom Truck’s expertise in frame modifications, has yielded proprietary axle configurations, like the tandem steers and tri-drives (faster, great turning radius and faster set-up time than its AT crane counterparts.)”

Coastline’s Goodale said that mobility and fast set up, high reach and the ability to carry payload on the flat bed are some of the standout attributes of a boom truck. Coastline is a dealer for the Manitex product line, but Goodale said one model is not more prominent than another.

“We have had success with standard flatbed, tractor mounts and swing cab type machines,” Goodale said. Which again points out the versatility of boom trucks.”

Looking to the future

When it comes to a more specific market demand, Runnion Equipment often caters to the Chicago area, where boom trucks are primarily used as a carrying device.

The National Series 600E is a 20-ton stand up operated boom truck. The series also has a 90-foot, four section boom, and 140 foot maximum vertical reach with jib.

“Most of our customers are trying to use these for carrying product, as well as using it for a crane to lift and place product,” Runnion said. “It’s important for our customers that we need to be very up to date on laws as far as the state laws are concerned for axle loading. For example, if I have a 23-ton boom truck, I know I have an x-amount of pay load capacity left on that boom truck.”

Runnion said this is important to his customers because they’re using these cranes not only to hoist, but to also carry product to and from jobs, so they must be mindful of the payload capacities. 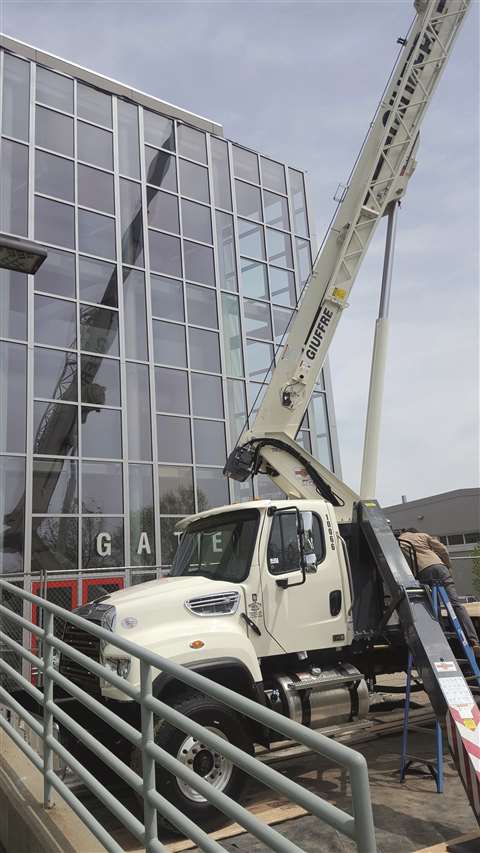 Giuffre has seen a steady demand for boom trucks in the mid-size class, 25 to 30 tons, but has recently seen a trend towards larger capacities and longer booms. Pictured is Giuffre’s 28-ton Terex TBT28106 at work.

“On the trucking side of things, we’ll get into putting additional axles on the trucks, after we’ve put them in service,” Runnion said. “Quite frankly, when you get into the bigger cranes, like the ones used in oil fields, these cranes are barely legal just driving down the road empty. You must configure the trucks accordingly, so they can be ‘bridge legal’ across various highways in the United States. In short, you have to know what you’re getting your customers into.”

Runnion made an important point about another aspect of the future of the boom trucks.

“Everyone should be aware about the impending crane licensing that’s going to be coming out at the end of the year,” he said. “That’s going to catch a lot of people by surprise.”

Similar to the mobility and accessibility of boom trucks, the lightweight and compact class of truck mounted articulating cranes brings a unique set of attributes to the table.

The F335 articulating truck mounted crane has proved the best-seller for Fascan with a variety of uses across industries.

“Truck-mounted cranes provide a tremendous amount of versatility on the jobsite, which is why they continue to be popular and why technicians need them in the field,” said Tom Wallace, sales manager at Iowa Mold Tooling (IMT).

“Some of this growth derives from traditional telescopic boom users converting to articulating cranes due to many technical advantages,” Sneek said. “While all classes are quite popular, we see the strongest demand for our cranes serving the construction and building materials industries.”

According to Carlos Batista, market manager for Altec, the articulating crane market is comprised of multiple segments. The largest segment of the market is construction which seems to be doing very well.

“Construction spending is up and higher than it was before the housing bubble burst in 2007,” said Batista. “Whether or not it is a direct correlation to the crane market - it is a good indicator of the overall economy and confidence that consumers have.”

The articulating crane market is getting much more technical and that is being driven by the need for safety and liability, according to Bernie Faloney, CEO, Fascan.

“These cranes are getting almost to the point of robots,” added Faloney. “We have on our cranes, an automatic folding and unfolding. The crane will unfold itself and put itself in a position ready to work. When you’re ready to close it, you do the same thing. What typically took three to four levers to pull to complete now takes one. The crane does it all itself.”

Evolving as steadily as the market, articulating cranes are becoming more and more advanced. 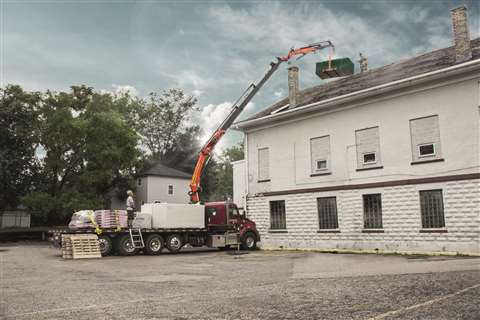 “They’re getting to be very sophisticated pieces of equipment, just like everything else, whether it be your car or your phone,” said Faloney. “People looked at [these machines] with a disdain because they weren’t used to it, they were short and looked funny. Now you have articulating cranes that can reach out horizontally nearly 180 feet, yet it all folds up and is capable of being on a truck within the truck laws.”

When asked about the most popular model, Altec’s Batista pointed to the EC315-4S, which offers the relationship of Effer quality and Altec service. The EC315-4S features 42 feet of maximum hydraulic outreach.

Palfinger’s PK 34002-SH has also found a strong place in many industries. It features a maximum lifting capacity of 22,050 pounds and maximum hydraulic outreach of 69 feet, 11 inches. A continuous slewing system also provides unrestricted movement making work faster and more efficient. The F335/65 articulating truck-mounted crane has proved the best-seller for Fascan with a variety of uses across industries.