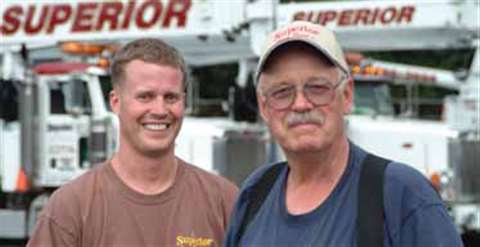 “These are good machines, very powerful,” says Marcason. “We work them very hard all over the New Jersey, New York City area.”

“Most of the things we do are not super heavy, but sometimes the lifts are high and can be complicated,” says Marcason.

Marcason and his son purchased their cranes carefully, giving a lot of thought and consideration of the features they would need for the wide variety of applications required. Marcason took care to spec out the carrier as well as the crane.

“It's not only the crane that is important but also the carrier,” he explains. “The two Peterbilts are big units, both with 475 hp Caterpillar engines. We've been very happy with these trucks. I think it's important to assure that the crane and the carrier are right for each other. You can't get all dressed up and wear your work shoes. Everything has to go together to make it a good setup. The truck is as important as the crane. You spend the extra money and put the crane on a good truck and you get your money back.”

Marcason has owned five Altec boom trucks since starting the business in 2000.

While he says there is no such thing as a machine that doesn't need service or have an occasional problem, Marcason reports that he has a good track record with the Altec brand and the quality of the Altec service team. “Nothing is perfect but when we have a problem they will help get us back up quickly,” he says.

Marcason says one of his units is operational by remote control, which he uses when he utilizes a man basket application.

“We use the remote control for the man basket when we do wireline work for Verizon or Sprint,” he explains. “Otherwise we don't really operate the crane that way. I'd rather be in the chair for any other crane operation, particularly for the heavier lifting.”

Marcason says his business plan has been simple but effective. “We do five to six lifts a day between my son and myself. We do a lot of tree work as well. These cranes are wonderful for tree work.”

He never rents his units out bare, preferring the owner/operator role. “My son and I, we go out everyday, weather permitting. Recently we were in one day that they predicted an incredible snow storm. We cancelled all our jobs and there wasn't any snow. That's the first day we've been in in months.”

Marcason has built the business around basic, routine lifting work. “We don't get any calls for anything too fancy. I've never been asked for any type of extra rigging or an extra winch.”

Marcason knows the lifting business in the New York City area like the back of his hand. He's been in the business for 41 years, working as an operator for other companies and finally choosing to open his own business.

“I worked for 33 years for a crane company and then I got smart and bought my own (cranes),” he says. “I've operated mostly all the hydraulics and all the brands. I've operated the big Grove cranes, the Pettibones and P&Hs, but I've found these Altec brands to be the money makers. They have been solid investments. These are $300,000 machines and there's more profit in them than the more expensive cranes.”

Marketing his services has not been a problem, Marcason says. “We do some advertising and we are in the Yellow Pages,” he says. “But most of our work is word of mouth and repeat business. Once they use us, they constantly use us. We are very friendly and we know what we are doing. When a customer likes you, they keep calling you.”

Customers like Marcason are valued by Altec, says Dave Hill, director of marketing services for the Birmingham, AL based company. “Dave is a believer in not taking shortcuts on his equipment, both the cranes and the chassis. He has had a lot of success with these units and we see value in working with customers to see what they are facing day to day in the market.”

Last fall Hill went out on a job with Marcason in New York City. “I knew these operators have stringent requirements to meet when working in New York City, but I didn't realize just how stringent and strict they are. I was surprised on the job that one of the city engineers came to the jobsite to approve the set up of the crane and the way the outriggers were positioned and to assure that the rigging was just right. They have many concerns to assure, making sure the outriggers won't penetrate the roadways through to gas lines and subway infrastructure.”

Hill says his visit has spurred Altec to look closely at outrigger set up and stability concerns. “We're seeing more companies wanting to set up outriggers in tight areas,” he says.