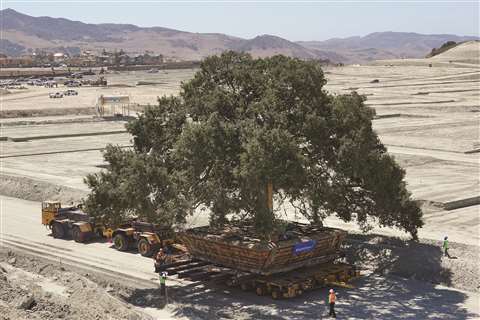 A sprawling and gorgeous oak tree, estimated to be more than 100 years old, stood in the way of a developer in Southern California. But that state has a “protected tree” program that calls for such heritage trees to be relocated rather than cut down.
Bragg Heavy Transport has become a specialist in tree relocation, although safely moving a giant tree and its roots is never routine. This particular tree was boxed up into a 30 by 30 by 7-foot transport box with six 50-foot support beams. The weight of the boxed tree with the beams was 750,000 pounds, which would mean the use of some powerful transportation.

Heavy Transport chose to use its two 8-axle Goldhofer THPH platform trailers set up in a double wide configuration. They rigged their two Prime Movers with 110,000 pounds of counterweight ballast on each. The project involved loading, securing, transporting and final set at the new tree location about 1.6 miles away. Total combined weight of the tree and equipment was 1,300,000 pounds.

The route had challenges galore, mainly because it was unpaved and there was an elevation change of 103 feet. The final placement of the tree was 78 feet higher than its original position for the past 100-plus years.

“The path of travel did not exist,” said Heavy Transport’s Kevin Reese. “To complete this move, a road had to be cut into the undeveloped land. The road created was a little more than 50 feet wide and had a variety of inclines and declines that ranged between flat and 9 percent grade. The roadway was dirt and compacted using standard dirt working equipment.”

Combined efforts for this move totaled more than 8,000 man hours to ensure the tree was boxed and secured properly for transport, and that the road was built in a manner to ensure that the project was completed safely and efficiently.
Given that hydraulic platform trailers were being used, the Heavy Transport team had the ability to adjust the trailer to complete the move safely.

“The innovative means and methods for loading and unloading these types of hauls are the key to a safe move,” said Reese. “The tree was prepared in a manner that allowed us to back underneath it and pick up the tree with our trailer versus picking up and loading it with a crane or gantry.”