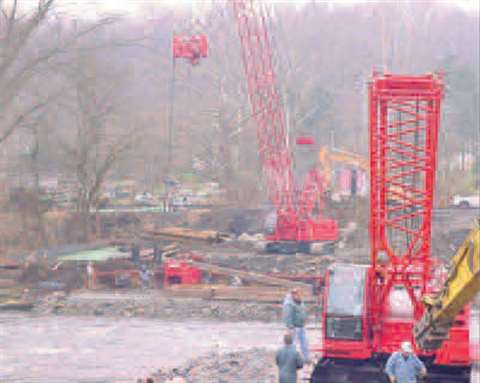 The new Mahoning River bridge is only 286 feet long and will cost $2.8 million, but it would have been much more difficult to construct without the two crawler cranes on site, says Gary Gorski, operations manager of Clearwater Construction of Mercer, PA.

For this bridge job, Clearwater has employed two Manitowoc Model 10000 crawler cranes. The cranes are rented from Stephenson Equipment and came from the Pittsburgh branch.

To say that they are essential would be an understatement. “It's the most critical piece of equipment on the job,” says Gorski. “The bridge required crawler cranes and it would have been dificult to do the job without them. We have concrete beams that weigh 60 tons each and we have to place 24 of them. We are using the two cranes to set them all. You can set those with any crane, but these cranes will do it together - one crane for each side of the beam. These cranes are able to do it all on a project of this size.”

The concrete bridge design, which replaces a former structure at the same location, is simple - two abutments, two piers and three spans. Construction began last November and it should be complete by June 2007.

Save for Sanders Construction being called in to set some beams and another firm that will lay down the asphalt and guide rails, the bulk of the work is being undertaken by Clearwater. “We are down to one crane now, but we are bringing the second one back in to set the beams,” says Gorski. “We do not need any more cranes.”

The cranes can lift 100 tons and are designed to move about easily and be easy to transport.

“At zero radius you can lift 100 tons,” says Gorski. “For the 100-ton class, their charts are excellent. The 10000 is a great product - they hold up well and the company stands behind its equipment. We are using them to drive piling, pour concrete, set forms, place the rebar, and set the beams. We are using one crane on another bridge job in Franklin, PA right now. That is one of the benefits of these cranes. You can move them so easily. Usually it costs about $20,000 to move a crane this size.”

Mobility and transportability are key points in choosing a crane, Groski says. “Crawlers are notoriously heavy and hard to take apart and put back together,” he says. “It would have been cost prohibitive to move a normal crawler crane but, because these cranes can be disassembled so easily and are so lightweight, it becomes feasible to move them from job to job.”

At times the cranes have operated independently on either side of the river, but they also operate very well when working as a team, Gorski explains. Clearwater vetted several cranes before deciding on the two Manitowocs.

“Nothing matches these cranes,” says Gorski. “They are good for pile driving. These particular cranes have three drums, instead of two as most cranes have.”

The construction began with the building of the abutments, followed by the piers.

“We had to clam bucket the debris out and you can only do that effectively with a crawler crane - we needed precision and maneuverability,” says Gorski.

The crews planned to start setting the concrete beams in early April, a task that should take out eight working days. The ahoning River is roughly 13 feet ep. “Some of the piling went own 90 to 100 feet deep,” says orski. “It took a couple of weeks complete each pier.”

The cranes should finish their ork by May 1, 2007 and then ey will be shipped to a site in hambersburg, PA, where the m is building retaining walls, th pilings underneath them, for riverside park project. Clearwater's crew, about 10 en on site, operates the cranes r nearly eight hours a day. The mpany has several trained rsonnel certified to operate anes and other specialized uipment. “Our team has been gether for more than 20 years,” ys Gorski. “Stephenson provided day of training for our men, offering insights and outlining the idiosyncrasies of the cranes. They delivered the cranes and set them up for us. The cranes are easy to understand and operate.”

Stephenson Equipment, which specializes in Manitowoc, Grove, Shuttlelift, Elliot, Manitex, National and other suppliers of cranes and construction equipment, offers a range of services, including CCO operator training and certification, flat rates on OSHA inspections, rentals and product support for the liftin market. The company has seven locations in Pennsylvania and New York State.

“The Manitowoc 10000 was recently introduced,” says Mark Fortunato, sales manager at Stephenson's Pittsburgh branch. “It is proving to be the preferred unit for bridge contractors because of the way it is easily mobilized without removing the tracks. It is a particularly desirable piece of is a particularly desirable piece of want to move to different sites. It is easy to assemble and disassemble. You can walk it on to a lowboy and take it to a job site, add the boom sections and be ready to work.”

Clearwater has the machine set up with 150 feet of basic heavy lift boom and a third winch drum, which allows piling work on the bridge, Fortunato says.