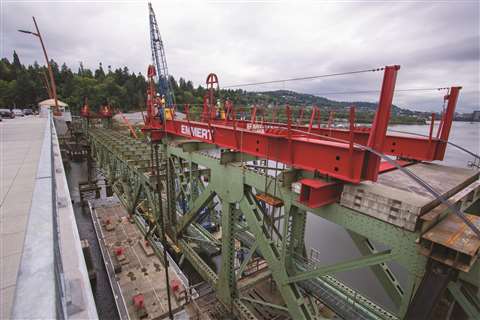 Built in 1925 and spanning the Willamette River, the old Sellwood Bridge was deemed to be structurally deficient in 2012. It was replaced with the new Sellwood Bridge, a deck arch bridge that opened in 2016.

As a part of the old Sellwood Bridge Removal Project, Emmert International was tasked with removing four spans.

“The task of lowering each bridge span to the barge below required detailed engineering and creative use of equipment,” said Emmert. “There were time management, environmental and safety concerns. To ensure a safe and efficient operation, specially engineered components were designed to work in conjunction with the strand jack system.”

Components and piling had to be removed by July 30 to meet a state-imposed window for fishing. Daily traffic windows limited work hours as did noise abatement requirements. The new bridge was open throughout the project.

Tidal constraints and geographical challenges were a problem during East and West bank truss removals. To prevent the barge from touching the river bottom, the spans had to be lowered onto the barge during high tide. The barge was repositioned in deeper water before the tide receded.

Because the old bridge had a coating of lead paint, when cutting or grinding, lead paint containment protocols had to be followed. Emmert limited these issues by developing attachments that did not require welding.

All ballasting was done utilizing a fish weir to assure that juvenile fish and marine life weren’t drawn into the pump. Daily inspections insured no harm to migratory birds. Permitting was required by the EPA, Army Corp of Engineers, Willamette River Patrol and Oregon Fish and Wildlife.

Two methods were proposed for supporting the modular stand jack system: tension and compression. After review, tension struts were chosen to reduce the amount of grinding and welding by building movable attachment brackets. The brackets were put in place before the bridge was closed, allowing installation of the strut sections needed for lowering the spans outside of the critical path.

Prior to installation of the custom designed modular lift system, pre-installed bracing and pre-tension members were installed and inspected. Ongoing inspections were performed throughout the strand jack installation to ensure no interference would occur during the lowering operation between the standing structure and the structure being lowered.

The modular strand jack support beams were designed to be setup quickly by the rigging crew while maintaining the highest level of safety. The safety cabling systems designed by Emmert were reviewed by the project safety committee, which was impressed by the ingenuity.

Once the system was approved the beams were pre-assembled with all the lifting components prior to being placed. Emmert’s team then installed the pre-assembled strand jack support beam system in pre-determined lift points at four locations and secured to the existing bridge girders by the engineered Dywidag hold-down plate system. The strand jack anchors were then connected to the T-Brackets that were pre-installed on the bridge spans. The T-Brackets were designed to be as light as possible while meeting ASME BTH-1 structural requirements.

Site-specific safety training was conducted prior and during the project, and daily safety briefings were conducted.  A custom-engineered fall protection cable system was used for the strand jack support beams. Emmert International completed the project safely and without incident.