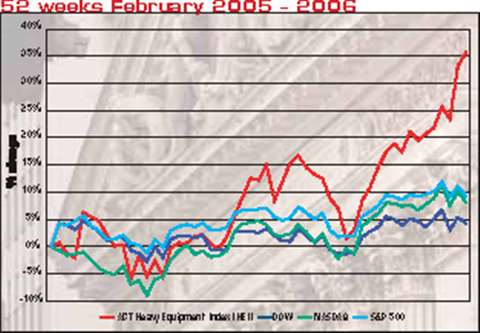 After a promising start to the year that saw the Dow break through the 11,000 point mark in early January, share prices fell again due to rises in oil prices and interest rates.

Oil prices went north of $60 per barrel again due to unrest in Nigeria, a major oil exporter, and political tension over Iran. While it is to be hoped that diplomacy will calm international tensions over Iran's uranium enrichment program, the regime's current stance that it will not allow United Nations inspectors in to monitor its reactors is continues to have a destabilizing impact on oil prices.

The situation in Iran may have come as a surprise for some, but the latest 0.25% rise in interest rates was widely anticipated. But what is interesting here is the changing of the guard at the US Federal Reserve. February saw Alan Greenspan step down as chairman after a remarkably successful 18½ year tenure in arguably the most important job in world economics. It remains to be seen which direction his successor, Ben Bernanke, takes with interest rates. Early comments suggest he is a like-for-like replacement for Greenspan, but only time will tell.

Although mainstream indexes took a knock from the oil-interest rate double-whammy, shares in US heavy equipment manufacturers shot through the roof in late January and early February. The key driver was of course full-year figures for 2005, most notably from Caterpillar, the dominant force in the sector.

Cat reported a 20% rise in revenues last year, to take its annual sales to a record $36.3 billion. More importantly, net profits were up 40% on 2005 to a staggering $2.85 billion, for a robust 7.85% net margin. With a bright outlook for this year - revenues are expected to hit $40 billion - investors were keen to buy the company, and its shares rose some 11% on the news.

This in itself had a big impact on ACT's Heavy Equipment Index (HEI), as Caterpillar represents more than 44% of the Index. The HEI is a measure of market capitalisation - the share price multiplied by the number of shares in circulation for each company - and this method currently values Cat at some $46.8 billion.

Cat was the first to announce its 2005 figures and 2006 outlook this year, and these exceeded analysts' expectations. Investors therefore took the reasonable gamble that other manufacturers' numbers would show similar gains, and bought their shares in anticipation of good results in the coming weeks. Publication of those results will show if the gamble has paid off.

As a final note on ACT's business coverage, we have changed the way we present our graph of the four key indexes' performance. From now on we will be showing a graph of the ACT HEI, Dow, NASDAQ and S&P 500 on a rolling 52 week basis. The aim of this is to present recent developments alongside the 12 month trend.      act

DISCLOSURE: Chris Sleight does not own shares in any of the companies named in this column.