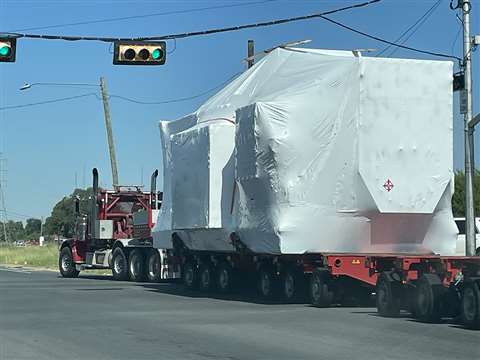 CH Robinson said careful planning and ongoing communication with its contract carrier was key to staying on schedule with the project. Photo: CH Robinson

Logistics and technology firm CH Robinson completed the transportation of compressor train components from Japan to the USA.

The Minnesota-based firm was tasked with moving two pieces of components which, once in the USA were combined to build a compressor train measuring 10.67 x 4.62 x 4.62 metres and weighing 79.8 tonnes, making the freight a superload.

The first leg of the journey required the components to be shipped from Japan to Houston, Texas, via sea on a part charter.

Once the load arrived at the Port of Houston, the company then assembled the compressor train before it secured the specialized heavy haul equipment needed to transport it.

According to CH Robinson, which recently announced gross profits of US$ 880.7 million for the third quarter of 2022, it used its carrier network to secure the equipment.

Using a Goldhofer THP modular trailer, the compressor train was transported 25 miles (40 km) from the port to a plant in downtown Houston.

Following the project, the company said that due to operational constraints given by the refinery to which the equipment was delivered, timing was key to the success of the project.

“The equipment needed to be delivered within a specific window because the refinery had to shut down operations to be able to install it,” CH Robinson said, adding that careful planning and ongoing communication with the client helped to ensure the compressor train was delivered to schedule.