Calm before the storm? 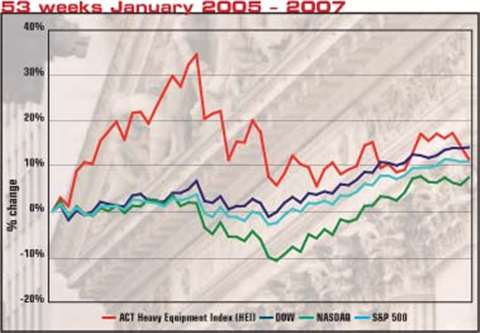 The heavy equipment sector certainly had an up and down (in that order) time in 2006, with an early-year rally giving way to a steep drop and lackluster recovery thereafter. As is the way, the New Year and early January period saw the volume of in the sector fall, and share prices stagnate, as the investment world waited for annual results.

The daily volume of trade in shares that make up the ACT Heavy Equipment Index fell to a monthly average low of US$ 766 million per day in January. The sector normally sees shares worth more than US$ 1 billion change hands on any given trading day, and it is fairly common for one of daily volumes to exceed the US$ 2 billion mark.

Although this is indicative of a certain lack of dynamism in the sector, the low volumes meant share prices were unusually stable in late December and early January. The ACT HEI fuctuated in a band between 132 and 139 points during this four-to five-week period, which was something of a change from the volatility normally seen in the sector.

But while the ACT HEI stood still, other indicators were rising. The Dow hit record highs, and both the NASDAQ and S&P 500 enjoyed useful gains.

The result was that for the 12 months to mid-January the Dow's net gain of 14.69% beat that of the ACT HEI (12.07%), and the S&P 500 wasn't far behind at 11.42%. Regular readers of this column will appreciate the significance of this, since the ACT HEI has historically out-performed the mainstream indicators by massive margins over its two-year history. For example, in May last year it had risen more than 60% over the preceding year, while the other three only managed about a 10% improvement.

What can we read into this For a start, it would be premature to say the HEI's recent poor performance marks the start of a cyclical decline. While it is difficult to see the Index regaining the highs of last May, it is important to remember that it is at, rather than falling.

But on the other hand we&339;re talking about highly cyclical stocks here, and history says their nature is to swing more violently than the wider markets. It may not be the time to ditch them just yet, but it's certainly a time for vigilance.

Annual results and corporate outlooks for the year ahead will be crucial in determining sentiment, and large capitalization companies like Caterpillar, Deere and Ingersoll-Rand will set the tone.

If their results are poor, the HEI will doubtless fall. But a sudden dip in our red line should not be cause for panic in the lifting and transportation sector. We know that specialists like Manitowoc and Terex are still working of massive backlogs for cranes, and they seem to be in a different part of the cycle to earthmoving and utility equipment makers like Cat. So while this mainstream part of the industry could look unappealing, the next few months could see crane makers stocks really shine.