It was a chunk of wisdom handed to him long ago by an industry senior. That wisdom pushed on John Moore until it became his primary belief about heavy transportation. No economics theory could snatch it from him. 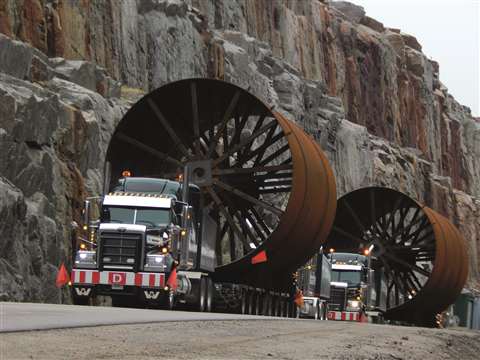 “The man told me. ‘Good years for heavy transport last five to seven years. Companies need to sock their money away during that period because those five or seven years are followed by the storm.’ I’ve always fallen in line with what he told me,” said Moore, who applies this wisdom to the operations of Woodstock, Ontario-based Earl Hardy Trucking.

“Our company and our industry have had five or six good years,” he said. “The storm must be on its way. But it’s definitely not here yet. Our company is expanding. Rates are up. The U.S. (2016) election helped, I think, since so much of our business is related to the U.S. economy.”

Moore said he is still making up his mind about President Donald Trump.

“His tax cuts and deregulation have been very positive,” he said. “A week after his election, long before he took office, you could sense that things were getting better in the U.S. and here. All that is excellent for Canada’s economy and our company. But other conditions are not so favorable. Fuel prices are skyrocketing in Canada, especially in British Columbia. We also have to deal with the continuing driver shortage. Inflation will be here, too. Costs keep rising. When inflation moves in, it hits everyone hard.” 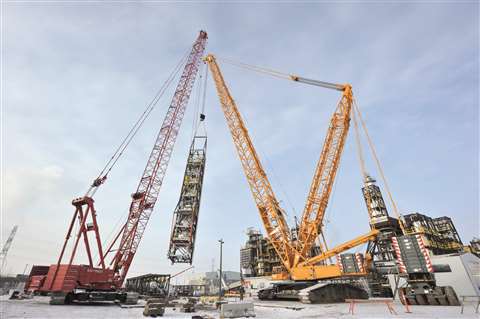 When the oil and gas market tanked, Entrec expanded its operations in the United States.

Earl Hardy Trucking operates 20 trucks and a variety of trailers from an ideal spot for north-to-south and south-to-north hauls. Woodstock is just 100-plus miles from U.S. entry bridges at Detroit, MI and Buffalo, NY.

The first is transformer shipping with its European customer base, primarily Germany, Italy, Austria and Sweden. Number two, according to Bastien, the company has avoided the widespread driver shortage by paying higher wages.

“Winter is over,” he said in an upbeat voice. “The snow is gone. Summer will soon be here. During winter, one of our drivers might go out on a one-day job, but he gets snowed in. He can’t see lines on the highway. It’s not safe to drive. He pulls over and waits. We all wait. But then it’s summer, and we can count on a one-day job taking one day. Not three.”

Should Quebec’s economy weaken, Bastien said that infrastructure projects might offset any business slippage. He cited an acute need for bridge replacement/improvement.

At Vancouver-based Nickel Brothers, long before summer’s arrival, oil and gas activity has begun to rebound from the doldrums.

“Our company is excited about where we think the oil and gas business is going,” said Adam Knipfel, business development director. “I think a lot of our competitors are also excited. I need to clarify that statement. Oil and gas is taxiing on the runway. It hasn’t taken off yet. But being on the runway is a much better place than being back in the terminal, where it had been sitting for years.”

Improving conditions will delight many in the western provinces.

“Alberta was especially hard-hit,” Knipfel said of the energy slump. “Before things fell apart, there were people pulling in $100,000 and $200,000 a year. When all that oil and gas work stopped, many of those people had to start making sandwiches for a living.”

Knipfel anticipates broader opportunities outside of oil and gas.

“We see it in mining,” he observed. “I attended a mining conference about four years ago. There weren’t 100 people present. There’s another conference on my current schedule and about 250 are expected for that one. It looks like mining people will also be making money again.”

Nickel Brothers has several responses to growth. The first is personnel. Its staff of 40 or 50 a few years ago has climbed to more than 80. Knipfel thinks that number will keep rising. Barge projects will be a factor. He speculated that Nickel Brothers does more water-to-land barge deliveries than any other North American company.

“The Northwest is our sandbox now, but we’re looking forward to playing outside our sandbox,” he said. “We’re thinking globally.”

Acheson, Alberta-based Entrec celebrated a dynamic financial performance last year. The heavy haul/crane company boosted revenue ahead of 2016’s number by 30 percent. Thanks to expanding energy-based initiatives, revenue from U.S. operations shot up 216 percent. That income came from West Texas oil fields and the oil sands of North Dakota. But achieving those big numbers did not come easily. 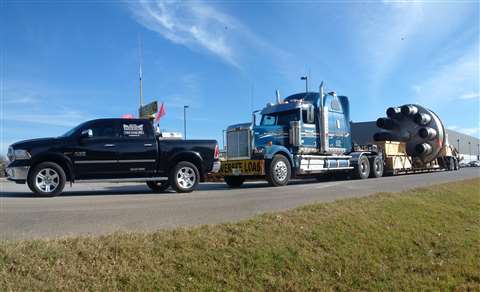 Entrec’s response? Crank up more business in the United States.

“A few years ago,” he said, “we did about five percent of our business in the U.S. Now it’s about 40 percent and trending higher.”

The company maintains six offices in Alberta, three in British Columbia and one in Manitoba. Its four U.S. locations include a new one in Colorado, where Stevens said wind-turbine equipment hauling offers promise.

Stevens speculated that national and provincial elections – bringing in office holders with friendlier attitudes toward heavy haul and crane work – would boost his outlook for Canadian business.

Another development carries more certainty. It’s a Shell project, the new natural-gas pipeline to be developed in British Columbia. The project’s worth has climbed to about $40 billion Canadian.

At High Reach, a crane and forklift company based in Oakville, Ontario, uncertainty about tariffs on Canadian products tinkers with Santo De Arcangelis’ outlook.

“I am basically an optimistic person,” he said. “I don’t know where we are headed on issues like U.S. car imports from Canada. But I will stay optimistic because that’s what I’ve always been. If I didn’t feel optimistic, I wouldn’t tell anyone.”

For De Arcangelis, who is president and founder of High Reach, “always” marks the three decades he has run the company.

Regarding tariff disagreements, De Arcangelis said, “People talk about things getting nasty between Canada and the U.S. on the issue. I don’t think that will happen.”

High Reach has a fleet of about 100 cranes and forklifts.

“Our rental fleet should be running about 75 percent,” he said. “It’s not. We’re probably at 55 to 65 percent. We haven’t bought any new equipment in probably six months. But I’ve been in this business for 30 years and will probably be in it for another ten. Why panic over six months? Instead, we stay nimble. We place machines in New York, Texas, California and other places. We have machines in Austria and Puerto Rico.”

Guay vice president Guillaume Gagnon explained, “Mr. Baronet wanted to have cranes available in as many offices as possible. That saves money for customers because the crane they want is probably right near them. Operators are near them, too. We have between 300 and 400. When there’s a big job for a customer, we’re already nearby, ready to help with the project.”

“We could receive as many as 300 calls a day about renting a crane,” Gagnon said.

The company had been busy with wind energy work, which he described as “pretty much over.” So, it’s on to bridge and building projects in Quebec’s biggest cities, Montreal and Quebec City.

“In the Northwest, we haven’t experienced problems that we’ve seen in some parts of Canada,” said Cale Anderson of the Abbotsford, British Columbia-based company. “I understand things were very rough in the mobile-crane market. That isn’t the case out here with our tower cranes. We don’t see any signs of a slowdown. Major projects have our fleet booked out well into 2019.”