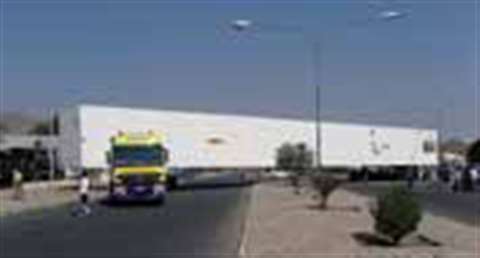 It was quite an adventurous travel for a large-scale cold box with a weight of 140 tons and a length of 50 meters (164 feet). Its travel started in England to the Port of Antwerp and from there on the container ship “Golden Isle” to the Port of Walvis Bay in Namibia. There the cold box was unloaded onto a low loader and transported over a distance of 2,400 kilometers (1,490.5 miles) to a copper mine in Chingola in Zambia.

DHL Global Forwarding Company was in charge of the transport and contracted the South African heavy-duty company Vanguard for the road transport. “We (chose) Walvis Bay as the landing port because Namibia owns special logistical advantages regarding infrastructure,” says James Robinson, Vanguard project engineer and manager.

Like most jobs of this nature, the transport required extensive planning, and several authorization procedures had to be carried out. The entire transport distance was checked, and uncertainties and weak points were assessed. A team of structural engineers was in charge of checking all bridge structures and getting the permits for crossing over them or finding alternatives.

For the over-the-road transport of the cold box, which was 50 meters long (164 feet), 4.5 meters wide (14 feet 9 inches) and 6.1 meters high (approximately 20 feet), the haulage company chose a Goldhofer heavy-duty combination with bolster equipment. This combination provided absolute maneuverability, as the vehicles could clear under the load. “Due to its maneuverability and the leveling, the Goldhofer heavy-duty combination was the ideal solution,” says Robinson.

The Vanguard transport team configured two 10-axle heavy-duty modules type THP/SL equipped with long-load equipment and two Mercedes Titan tractors with 600 hp each. The rear 10-axle trailer was equipped with a self-tracking device and could also be steered manually if necessary. “Due to the modular system we could put together exactly the combination we needed,” says Robinson.

After loading at the port, the convoy – with a total combination length of approximately 70 meters and a total weight of approximately 260 tons - set off. The transport travelled mainly on the Trans-Caprivi Highway. It was the first and biggest transport of this kind that had ever left this port on its way across Namibia.

In Namibia, the highway was in good condition and was only limited by a few obstructions. They were able to travel at about 30 kilometers per hour, thus advancing very well.

Not even narrow bends and curves were a problem due to the ease of maneuverability of the trailer. But the closer they were getting to Central Africa, the more limited and difficult the road conditions became. Extreme side tilts of the road had to be compensated for by means of leveling the Goldhofer modules. Over and over again, curious people lined the highway in order to marvel at this unique transport. At times the crowds delayed the convoy, but not for long.

The first problem arose at the Kavango River as the bridge was narrow and did not meet the bearing capacity for the entire convoy. To cross the bridge, the tractors were uncoupled from the trailer and drove alone over the 60-meter long bridge. Then the trailer, weighing approximately 180 tons with the cold box attached, was towed across the bridge using a steel cable.

The countryside was beautiful; however, Robinson says the Vanguard transport team did not have much time to enjoy it. In one of the many villages, the transport team had to manage a 180 degree bend. Here the Goldhofer heavy-duty modules with their hydraulic auxiliary steering, along with the bolster equipment, could prove their full power. To the astonishment of many spectators the trailers cleared under the load and thus took the total combination with a length of around 70 meters (229 feet and 8 inches)through the bend without major problems.

After approximately six weeks of travel, the convoy finally made it to its destination, reaching the “Konkola Copper Mine” in Chingola. Here the last obstacle was greeted – a very narrow factory entrance. The cold box was needed in the mine as an important component for melting copper.

Once the cold box was off loaded the transport team was satisfied. “Our decision in favor of the Goldhofer heavy-duty system was right,” says Robinson. “The good maneuverability, the leveling and also the road protection due to the swing-axle system of the Goldhofer trailers offered considerable advantages against customary transport systems.”