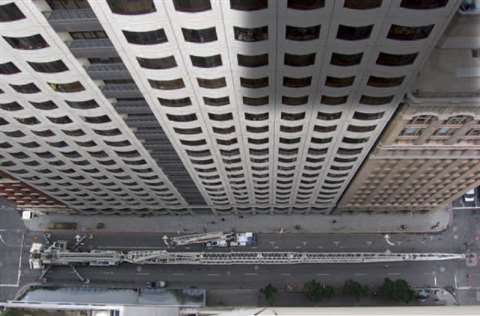 From intersection to intersection, the street on which the crane was staged spanned just 307 feet. From the end of the counterweight to the tip of the jib, the rig length was 302 feet

When the time came to replace an aging chiller unit on a skyscraper in downtown San Francisco, the contractor sought a lifting solution that posed a list of challenges a mile long – well, at least a city block.

The job would require a large capacity crane with a high reach to remove the old chiller, related equipment and debris then hoist and place a new 28,000 pound chiller and its peripheral equipment. Assessing what needed to happen at the top of the 345 foot building was a piece of cake as compared to the problems that had to be overcome on the ground.

“Being able to find a configuration that kept (us) inside the trolley lines and still reach the roof with the capacity to hoist the chillers are what won us the job,” explains Joe Nelms, vice president sales and operations for Bigge Crane, based in San Leandro, CA. “De-energizing and removing the power lines through one of the intersections would have cost additional tens of thousands of dollars.”

For the job, Nelms says they chose the one machine in their fleet that could accomplish all the requirements, a 2003 year 600-ton Terex Demag model AC 500-1.

“We think it's the one machine west of the Mississippi that could do this job without having power lines removed and traffic rerouted,” Nelms says. “The building was relatively close to a tourist area that is as busy on weekdays as weekends. So it wasn't just the power lines, but also the rerouting of traffic.”

Plus, the length of the available area on the street was not the only space issue. The narrow street was barely wide enough to capture the crane's extended outriggers. Of course all the details were worked out long prior to the day the job was carried out.

Nelms says the crane was angled just a bit to assure it didn't protrude into the intersection and interfere with the power lines.

“It was a great project,” says Nelms. “We mobilized, hoisted and demobilized in one day. Of course it required a good bit of coordination.”

Including the crane, counter weights, boom and luffing jib, Nelms says it took about 14 truck loads of parts to deliver everything to the job site and assemble the machine. Once the crane was ready to go, getting the old chiller removed and the new one installed required about 2.5 hours of hoisting, he says.

“Besides the chiller units, we hoisted up and down what was scrapped up and debris boxes. Some of the new equipment went up palletized.”

Nelms contends that the only other option for completing this job without having to remove the power lines and re-route traffic would have been by using a helicopter.

As for the Terex Demag model AC 500-1, Nelms says “we love this machine. We use it at refineries, on high rises, at jobs all over...it's a great machine.