Back in early August, Congress passed the Creating Helpful Incentives to Produce Semiconductors (CHIPS) Act – a $280 billion investment in advanced manufacturing, research and technology meant to increase America’s international competitiveness in the high-tech sector, particularly semiconductors. The law will make the U.S. less dependent on Taiwan for production of the ubiquitous wee chips that are critical to U.S. competitiveness. 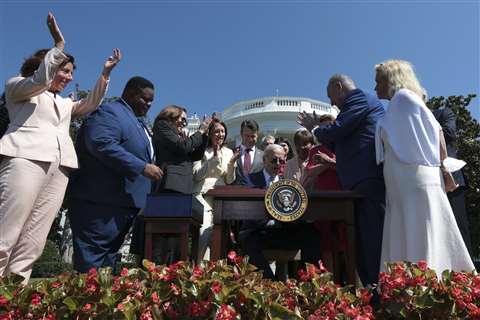 President Joe Biden, center, signs into law H.R. 4346, the CHIPS and Science Act of 2022 on the South Lawn of the White House on Aug. 9, 2022 in Washington, DC. Photo: Pool/ABACA via Reuters Connect

Top global manufacturers like Intel and Samsung have already signaled their plans to relocate and expand operations in the U.S. as a result, and others will follow. This is good news for construction and trucking. The CHIPS Act will funnel money directly to manufacturers and impact other industries, suppliers and partners – on the strength of a $24 billion Advanced Manufacturing Investment Credit, which will incentivize the building and expanding of domestic semiconductor manufacturing facilities.

Manufacturers would also be prohibited from building or expanding a chip facility in China and other nations where there’s a national security concern, for ten years.

That said, there is already an estimated $33 billion in semiconductor fabrication plants in the planning stages – which is obviously great news for construction across traditional sectors, as well as ancillary areas, like schools, research and technology hubs, supplier facilities, telecommunications and infrastructure.

Essentially, the construction sector should be looking at long-term job growth and economic development as a result. Better still, even if a contractor isn’t directly involved, or doesn’t have experience in semiconductor plants or advanced manufacturing, or even government contracts, related opportunities will be available in coming years.

What is the impact on the automotive sector?

The measure was also praised by trucking interests who viewed it as a way to produce the vital chips that power so much of today’s economy, including motor transport. In a recent interview, American Trucking Associations Executive Vice President for Advocacy Bill Sullivan, said, “Semiconductors and computer chips make our economy and industry run – right down to the trucks we drive – and we have seen the consequences of decades of neglecting domestic manufacturing of these critical components.”

Drilling down into the automotive sector, in 2021 (according to Goldman Sachs), each new vehicle produced contained close to 300 different semiconductors – an increase of 40 percent from two years earlier. Cars and trucks are only getting smarter, which means more chips.

As we also know, the pandemic lockdowns exposed huge supply chain vulnerabilities for a number of goods coming into the U.S., especially semiconductors. As a result, the North American market was short nearly 100,000 new vehicles as recently as this past August, thanks to the ongoing chip shortage (Automotive News, Inc.).

And national security certainly can’t be overlooked in all of this. Washington fears that Taiwan, which is under increasing threat from mainland China, would reduce semiconductor production should a Chinese invasion occur. And even though the total semiconductor market was invented in the U.S., Taiwan-based companies produced about 60 percent of total global chip foundry revenue last year (TrendForce).

While questions hover in regards to how the funding will ultimately be distributed, and how long it will take the CHIPS Act to truly start benefitting industry sectors like construction and transport, the fact remains that having semiconductor manufacturing back on American soil is a move in the right direction for the U.S.