The acquisition is part of USCG’s Shiplift Expansion at its facility in Baltimore, MD, also known as “The Coast Guard Yard.” The overall project adds a third rail (area) that the USCG will use to rehabilitate ships. Upon completion, the expansion will increase its dry dock capacity by 30 percent.

The tower crane requirements were free stand at least 100 feet, lift 60,000 pounds at 90 feet in two-part line, a main boom of 180 feet and a fly jib with a capacity of 20,000 pounds. The USCG procured the tower crane in an open competition among tower crane providers. They selected the JASO J780PA that the CTS/JASO team proposed due to its technical specifications, and the value provided. The CTS/JASO team proposed the J780PA due to its ability to meet the contractual requirements, but also due to JASO incorporating the latest technologies into the crane.

The J780PA delivered has approximately 130-foot height under the hook, 180-foot main boom, 16.5-foot fly jib and will pick 90,000 pounds at 89 feet exceeding the contractual requirements by almost 50 percent. 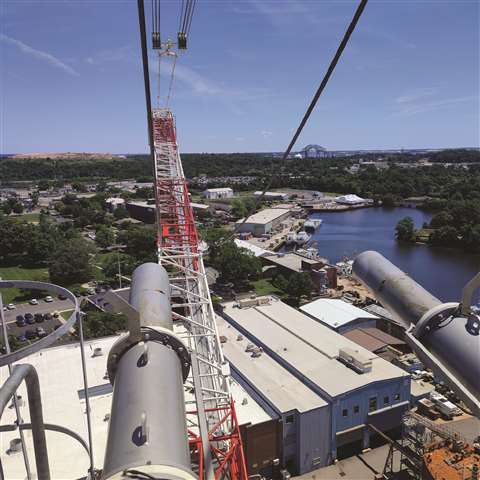 The United States Coast Guard (USCG) purchased a J780PA.60 from the Crane Tech Solutions (CTS) / JASO Tower Cranes team. The acquisition is part of USCG’s Shiplift Expansion at its facility in Baltimore, MD.

The crane arrived in Baltimore in 14 high cube containers and one flat rack. This is a testimony to the JASO engineers being mindful of transportation cost and minimizing the need for flat racks. For example, the upper and lower A frames (including the ladders and handrails) were shipped in one 40-foot-high cube container.

The CTS/JASO team used Wings Enterprises to assist with the assembly of the crane. The erection took only three days from setting the first mast sections to reeving the main hoist and the fly jib.

“The crane was surprisingly easy to assemble considering its size and complexity,” said Frank Hegan, president of CTS.

The crane lifted its first load in early July, and the USCG continues to use it in its daily ship repair operations.

“The CTS/JASO and the U.S. Coast Guard worked together to ensure a successful project,” added Hegan. “The project is the definition of teamwork. The USCG has a crane that meets its current requirements, but also provide one that has a higher capacity should it be required in the future.” 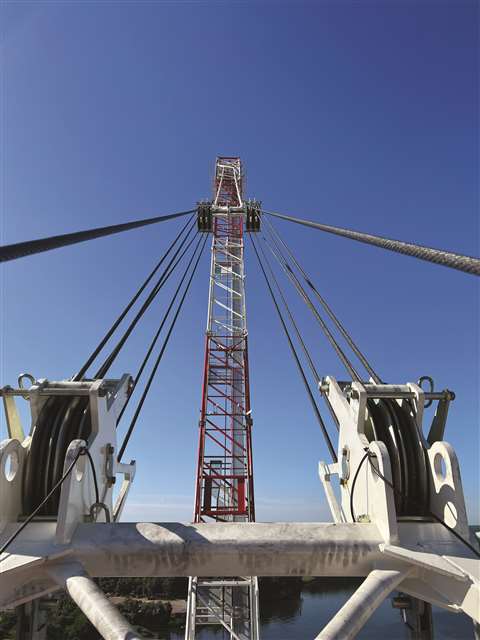 The J780PA now has a 16.5-foot fly jib option. The USCG requested this feature during the proposal phase, and CTS load tested the fly jib at more than 20,000 pounds.

This J780PA.60 is one of the largest electric luffing tower cranes on the market, and JASO has sold J780s to various global markets. There are currently three different sub models that have various load charts. This shows the flexibility of the JASO engineers because they designed a platform that would lend itself to providing a more tailored crane. The maximum load is 165,000 pounds, and the USCG model has a maximum capacity of 132,000 pounds, both in three-part line. The target markets are high rise construction, PPVC projects, shipbuilding and mining that require a luffing crane with a strong load chart. 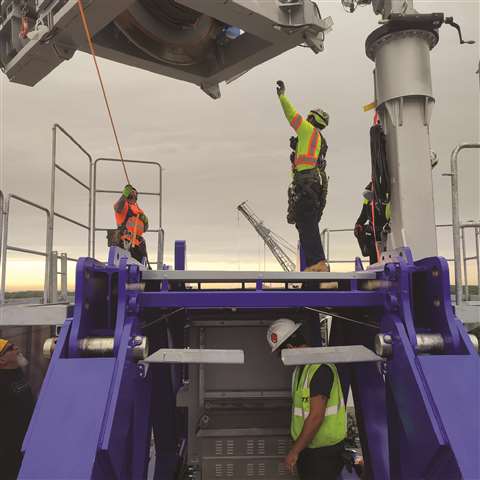 JASO designed the crane mindful of shipping costs, assembly time and ease of maintenance. The turntable (with A frame) weighs 56,100 pounds (25.5t), but this can be split reducing the load to 43,100 pounds (19.6t) and 13,000 pounds (5.9t). Further, the owner can assemble the main boom in two picks and more when required. The counter jib has two levels which reduces the counter jib to 31 feet and makes the installation easier.

The crane comes with an auxiliary winch that aids the assembly and doubles as the winch for the maintenance jib. This affords the maintenance team a crane to bring tools, equipment and components up to the counter jib for repair or replacement.

The J780PA now has a 16.5-foot fly jib option. The USCG requested this feature during the proposal phase. CTS load tested the fly jib at more than 20,000 pounds. The USCG mentioned that they see an excellent value in being able to use the fly jib option. The crane allows the operator to use both main hoist and fly jib (the operator cannot operate both at the same time) on a single pick.

The main boom comes with a wind sail that helps minimize the weathervane radius, between 50 and 100 feet depending on boom length and weather conditions. JASO also designed a new tower section for this crane. It is compact, square leg, mono-block construction that measures seven feet center to center (TSP20-5.6). As it uses the same system line as other JASO towers, it allows owners to use the TSP towers with other JASO towers to gain higher free-standing heights.