For about 13 months a Linden Comansa LCL310 luffing jib tower crane worked on Waterloo, a 30-story student housing development in the West Campus area of the University of Texas in Austin, TX. Photos: Patrick Morrison

One project that is slated for completion in the summer of 2022 is Waterloo, a 30-story high-rise that started construction in June 2020. The building will feature 241 student housing apartments on 25 residential floors along with above-grade parking, a street level lobby and coffee shop. The tower recently topped out at 300 feet with a Linden Comansa LCL310 luffing jib tower crane handling most of the lifting for the project.

The crane was erected in October 2020 and was slated to be disassembled in late November 2021, according to Braden Bliss, superintendent for General Contractor J.E. Dunn Construction.

The crane topped out at 329 feet. Its heaviest lift was a 13,700-pound outside air unit

On rent from Blue Hat Crane based in Kansas City, KS, the LCL310 topped out at a hook height of 329 feet. The heaviest lift was a 13,700-pound outside air unit. According to the lift plan supplied by Blue Hat, the crane will be dismantled using a Liebherr LTM 1500-8.1.

The LCL310 is assembled on a more robust tower section, allowing it to reach taller free-standing heights with an improved load diagram. It comes in three versions with a maximum load of 26,460 pounds, 39,680 pounds or 52,910 pounds and a maximum reach of 196.9 feet. The modular jib allows for different reach configurations every five meters.

The crane features Comansa’s CUBE cab that gives the crane operator full visibility of the hook and the work area. The electronic coordination system for luffing and hoist movements can be activated from the cab, enabling the operator to move a load horizontally without worrying about the hoist movement.

The 229,720-square-foot Waterloo project is developed by Lincoln Ventures, an Austin-based real estate investment firm. Waterloo is located on a .45-acre site along 24th Street in the heart of West Campus near the University of Texas at Austin. Not your average student housing development, Lincoln Ventures said Waterloo tenants will have access to such amenities as a mezzanine level with private lounge and study rooms; a fitness center with sauna; and a rooftop waterfall edge pool and hot tub featuring amazing views of downtown Austin, the company said.

“The design of each unit has been tailored to accommodate the needs and lifestyle of tomorrow’s college students who value balancing a live, work, play mentality in conjunction with their academic lives,” said David Kanne, CEO of Lincoln Ventures. 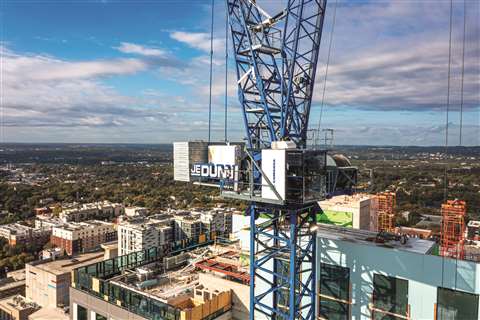