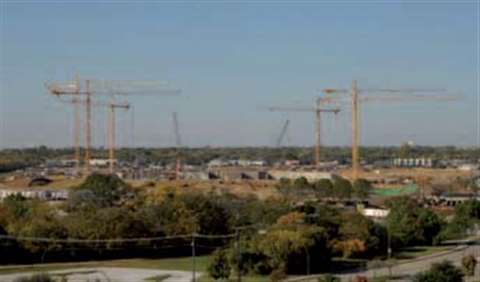 Six tower cranes and two crawlers are at work on the new Dallas Cowboys stadium in Arlington, TX. The new stadium is set to open in time for the start of the 2009 NFL season

Construction of the stadium, located in Arlington, TX, is due to be completed in early 2009 in time for the start of the new NFL season. According to the Dallas Cowboys, the stadium will be the largest NFL stadium in the world with capacity to seat 80,000 people and flexibility to accommodate up to 100,000 people for special events.

The stadium's retractable roof will be supported by two steel arches, which will create the world's longest single span roof structure, according to HKS Architects, designer of the stadium.

The 35 foot wide, 17 foot deep arches will have a span of 1,290 feet, each weigh 3,255 tons and rise 320 feet above the pitch. HKS's design also features retractable end zone doors, a inclined glass clad exterior and, what is claimed to be, the largest center-hung video board in the world. Manhattan Construction is the general contractor for the stadium.