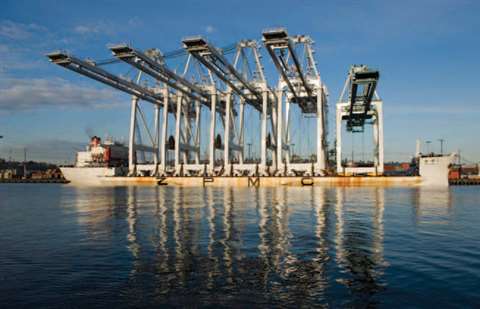 It must have been quite a sight, a huge ocean-going vessel rounding the bend and slowly steaming through the scenic Puget Sound, making its way to a berth at Terminal 18 where its cargo would be unloaded, ultimately, to unload cargo. What made the specially designed ship such a dramatic sight to behold were the huge, bright white 242-foot high container cranes standing upright and fully assembled on the vessel's deck.

Manufactured by Zen Hua Port Machinery Co., based near Shanghai, China, the cranes had been on order for more than a year, and officials with SSA Terminal were excited that they had finally arrived. SSA operates Terminal 18, which it leases from the Port of Seattle. The cranes cost in the ball park of $7 million a piece, a significant private investment, but they will likely yield a quick return, according to terminal manager Lee MacGregor.

“We already have six container cranes at this terminal [owned by the Port] and with the four new ones, we now have 10,” he says. “We're hoping to have them operational by the first of August.”

Because the cranes are shipped from the factory already erected, getting this type of crane operational usually doesn't take this long, MacGregor says. “We are close to having them operational. We had some permitting issues, and we were slowed down on the electrical side. T e good thing is they are already erected. We just rolled them off the ship all in one piece.”

Using a pair of two-wheeled bogies attached at each of the bottom corners of the cranes, the machines are slowly rolled off the ship. Each crane has a total of eight bogies, which roll on a system of temporary rails from the ship onto the dock. Winches are rigged to pull the cranes off the ship. T e winching systems use a pair of 70 ton water tanks as counterweights, or “deadmen.” Once the crane is on the dock, its permanent wheels are properly positioned above the crane rails on the pier, and the bogies lower the cranes into place. According to a Port of Seattle fact sheet, the entire operation is coordinated with tidal changes, and the ship must be ballasted to remain level as the weight of the cranes shifts from the ship to the pier.

Once the cranes are set in their respective places, beams are installed to secure them in place. T e electric cranes can run day and night. When they are working, the cranes measure about 242 feet high, but with the boom up, when they are not working they reach to 386 feet. Outreach is 203 feet, or all the way across a typical container ship that is 23 containers wide. These new container cranes can reach 85 feet further, or 10 containers wider, than previous models. T e cranes weigh approximately 1,200 tons a piece, and lift 65 tons.