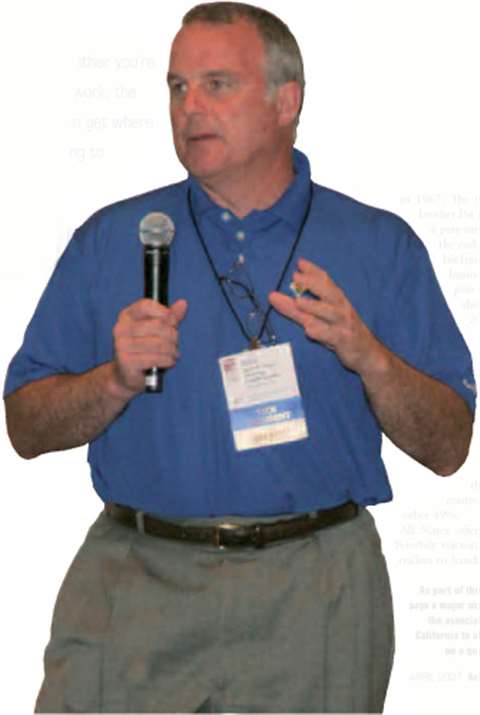 Beneath the calm, amiable demeanor of John Ward, president of All States Freight Systems, Twinsburg, OH, is a successful entrepreneur who approaches every important task with great determination and energy. He does not shy away from challenges; indeed, he welcomes them.

This attitude, which has helped his business flourish, bodes well for his term as the new president of SC&RA. Like every strong SC&RA president, he begins with an unwavering commitment to both his company and the industry overall.

His father, John (Jack) P. Ward, started the business as an agent for several truck lines in 1967. The younger Ward and his brother Pat joined the company on a part-time basis as teenagers in the early 1970s. Knowing that his future was with the family business, Ward left college to join the company full-time shortly after he turned 20.

After deregulation, the company gained authority and began building its own fleet. Concern about issues facing the industry led All States to join SC&RA in the early 1990s. The brothers now own the business, with Ward controlling 51% and Pat the other 49%.

All States offers a wide selection of Peterbilt tractors with a larger fleet of trailers to handle nearly any customer need. The company's current capacity 200,000 pounds net weight on 13 axles, but plans call for the purchase of additional equipment to increase that capacity.

“I'm looking at buying a multiple-axle steering trailer, but I haven't decided exactly what will work best for us,” says Ward. “With hauls getting bigger and heavier and more varied in nature, we need something that can be very, very versatile - something that can accomplish four or five tasks.”

He says specialized carriers can no longer count on carrying the same thing every day for one, big core customer.

“You have to be flexible because you just never know what you'll be called on to haul,” he says. “Just look at all the wind-energy business. That wasn't even around five years ago.”

Today, the company offers its services throughout the 48 continental states and Canada. Coordinated delivery of shipments to Alaska, Hawaii, Puerto Rico and other destinations is also provided. The company offers standard cargo protection to limits of $1 million per occurrence and liability coverage to $3 million.

As he prepared to assume the presidency of SC&RA, which will take place during the annual conference in San Antonio in April, Ward shared his thoughts on the industry and the association.

A lot of things have changed. For one thing, the equipment is far superior to the early 1970s - powerwise and comfortwise. Back then, we thought a 50,000 pound load was huge, now we don't think anything of 100,000 pounds.

Another pretty big change is the way we communicate. We used to handle much of our business by phone. Now, it's mostly by e-mail. There definitely are some advantages to e-mail. Before, we might be on hold for five minutes waiting to tell a customer yes. Now, we can agree immediately by e-mail and move on.

And we are even able to use our cell phones to receive e-mail. That means we're not tied to the office. We can leave and still have all the tools we need to operate. It wasn't that long ago that if we missed that phone call we might not get the work. There are trade-offs, though. We lose some of that personal touch, that ability to develop relationships over the phone. Overall, though, communications advancements are a positive.

How about negative changes?

Well, health care expenses keep escalating. That's a special drain on a small company like ours. It gets harder and harder every year for us to provide full-medical coverage. Our health insurance premiums seem to go up 15% every year regardless of our claim rates.

Why should companies select your company's services rather than those of a competitor?

Webelieve that being a smaller company actually works to our advantage. We can respond quicker to a customer's needs. When somebody wants to know how much a move will cost, we can sometimes give a quote immediately or within an hour or so. It doesn't usually work that way with large companies. Everything doesn't have to work its way through a big bureaucracy here. If there's a decision to be made, Pat or I make it promptly.

We also have earned a reputation for being on time. We show up and we deliver when we're supposed to. And when we pick up something, we do everything possible to ensure it's delivered in fine order. We have low claims on both the cargo and liability side to prove it.

Safety is an evolving concern for SC&RA member companies, whether they're involved with specialized transport or crane and rigging work. How does your company address issues of safety and reduce risk?

Sometimes people make things out to be more dificult than they really are. We do something as simple as telling the driver to have a safe trip. We're always reminding drivers to watch their speed or check their height. We also keep telling them that they're the professionals on the highway and that they need to be prepared for noncommercial drivers that drive recklessly - darting in and out or following too closely.

It's an ongoing process. Sometimes, it's redundant, but we feel if we keep reminding them, they'll remember and stay aware of dangerous situations. We teach all the time. Safety is ingrained in the office and transferred to the drivers. Really, the trucking industry is pretty simple, but you need to learn and remember the basics, like safe operating procedures.

What do you see as the most potentially attractive emerging markets for the business of specialized transportfi?

What's really hot is wind energy. There are all kinds of opportunities out there. We're bidding on a portion of work on a wind farm in upstate New York.

In fact, anything relating to power is looking good right now, whether its wind, nuclear or traditional coal-fired plants. Hopefully, there will be some new nuclear plants. All sorts of older power plants will need rehabbing, and that's good hauling. The need for power is not going away. That market will keep heading up and up and up.

You've been involved with specialized transportation your entire career. What is it about this industry that keeps you engaged?

One thing I do like about our end of the trucking business is that there are always new challenges. It certainly isn't boring. For one thing, every load is different.

And, hey, it's a fight every day - whether you're fighting competitors to get the work, the state to get permits or traffic to get where you're going. You're always trying to get on top. I like to mix it up. That's probably why I like the trucking business.

As president, you've obviously been active in SC&RA. Why?

One of the forces that drove us to join was it seemed like a good outlet for addressing a lot of important issues. As I noted before, you need to fight for certain things. If you look back, this association has made a lot of progress. SC&RA was instrumental in fine-tuning load securement regulations to fit what we actually do as opposed to what people thought we did. More recently, we helped convince California to allow up to 60,000 pounds on a qualifying tridem axle group. This was a major victory that came after years of effort. There have been many similar successes on the association's crane and rigging side.

I've also become more involved because I like the other members. Early in my career, I thought the last person you wanted to talk to was your competitor. Maybe it's just part of the maturation process, but I've found it's really helpful to talk to people in the same position in different companies. When you can compare notes on different issues, it really shortens the learning curve. Networking through the association has helped my business, too. Other members have recommended me for jobs. Like many other members, I've made plenty of friends through SC&RA.

SC&RA is enjoying a growth spurt. Do you have any advice for new membersfi

I really do think members should be involved. To a certain degree, you're motivated by selfish goals. You're looking at issues your company is facing, and you want them resolved. Then you see your position isn't unique and others are dealing with the same issues. But you bring a different perspective to the issue at hand, and that could mean all the difference. Fresh blood is always good. After awhile, you can see that by working with other members you can break down artificial barriers that impede our industry. Once that happens, it's easier to get things done the next time.