Contractors Cargo Company recently finished delivering more than 100 oversized loads from the Port of Long Beach, CA to Austin, NV for the expansion of a geothermal energy power plant known as McGinness Hills. The 48 MW expansion will make McGinness Hills the largest geothermal plant in Nevada and on federal land in the United States. 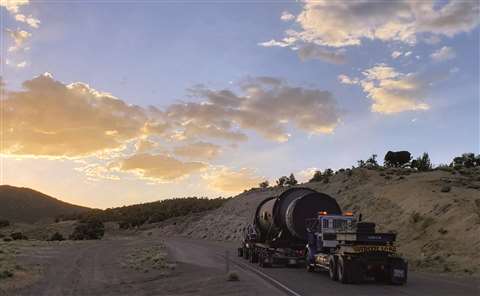 The vaporizers, which were the largest loads of the project, measured 71 feet long, 12 feet 3 inches wide and weighed 328,000 pounds.

The hauling project required months of planning and organizing because there were so many over-dimensional loads that arrived on different vessels and needed to arrive at the jobsite in a certain order for installation. Everything from 70-foot long, 330,000-pound vaporizers to 71-foot long 215,000-pound preheaters were on the cargo list.

Contractors Cargo specializes in “erector set” custom trailers and has the ability to build load-specific trailers, minimizing route obstructions and the need for pilot cars and police escorts.

The route was roughly 600 miles and depending on the size of the load, would take about 1.5 days to get to the site for the permit loads and four days for the police-escorted loads. The first loads took off in February 2018 and the final delivery was made in June 2018.

While most of the pieces were moved during the daylight hours, the vaporizers had to be moved at night. The vaporizers, which were the largest loads of the project, measured 71 feet long, 12 feet 3 inches wide and weighed 328,000 pounds. The loaded dimensions were 139 feet long, 20 feet wide and 17 feet 5 inches tall. The loaded out weight of the vaporizer transport system was 405,000 pounds.

The route had several narrow, winding mountain climbs that were the most challenging part of the haul. Seven permits were required in the various states, counties and cities. Up to eight loads left the Port of Long Beach each day from February to June. 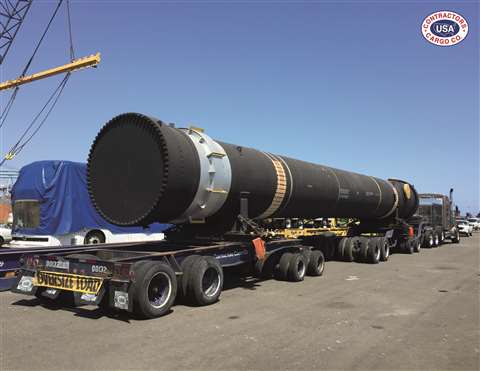 “During this project our trailer pool consisted of 19 axles, 11 axles and 7 axles,” said Contractors Cargo’s Keoni Rabaino. “With cooperation between the California Highway Patrol and the Nevada Highway Patrol, the larger 19-axle police-escorted loads were delivered in a week’s span. It was a great team effort with the Port of Long Beach as all these pieces were not only handled by Contractors Cargo but by the Port as well and they made receiving the breakbulk easy and seamless.”

For the 7-axle trailers Contractors Cargo was able to lower the overall height while fully supporting the cargo via the deck by using its erector set-style equipment.

Regular trailers would be too high and require pilot cars, Rabaino explained.

The loads were placed on the trailers using a combination of direct discharge from the ship and a crane lifting them off the dock.

At the power plant, there were several different cranes available to off-load the trailers, including a 150-ton capacity Liebherr all-terrain crane as well as various 265-ton and 360-ton Liebherr all terrain cranes for the larger picks.

“With projects of this magnitude and so much money on the line for everyone involved, project planning with all parties is crucial to maximize efficiency and minimize surprises. Therefore it is rare to have everyone on the same page but with valued partnerships like this, is it possible and was accomplished safely and on schedule,” Rabaino said.