Crane booms get tangled in Austin, injuring 22 workers at jobsite

Sixteen people were hospitalized after a tower crane and and lattice boom crawler crane became tangled on a jobsite in East Austin, TX.

A tower crane and a lattice boom crawler crane became tangled several stories above a building that was under construction in the East Austin, TX Mueller neighborhood. The mixed use development is one of the fastest growing areas of Austin and includes residential, retail and office space. 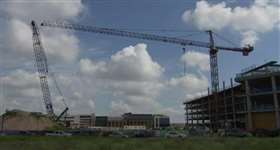 Wire rope of both cranes became tangled. Most injuries were due to workers scrambling to leave the jobsite, according to news reports.

According to news reports, 22 worker were hurt and 16 were injured and taken to area hospitals. None of the injuries were life threatening and most injuries occured as workers were trying to leave the jobsite, it was reported.

Wire rope from the tower crane appeared to have become tangled with wire rope on the crawler crane’s jib, causing the jib to swing downward, although it did not fall. It is not clear if the two crane booms collided or how the wire ropes became tangled.

“We are in close contact with our subcontractors, local authorities, and our on-site team to better understand what transpired,” Craig Morris, senior vice president for Cadence McShane, said in a statement provided to Austin news stations. “More importantly, we are working with the crane subcontractor and the fire department to ensure the damaged crane is safely dismantled. Since this is an ongoing investigation, we cannot provide additional details at this time.”