Crane cameras make jobsites safer, more productive and are a critical aid to operators, according to the makers of these devices.

Camera systems on cranes used to be considered bells and whistles. But once operators see the benefits of these “extra eyes,” cameras have become critical operator aids.

With the aid of a camera system, the operator can see the rigger on the ground and the area around the load, which is especially critical in blind lift situations. This increases the confidence and reliability of the operator when performing the lift and during all phases of a crane’s mobilization, operation and demobilization.

“Netarus camera systems, such as HoistCam, make lifts safer by providing the operator with direct line of site of the load and of people and equipment around them including the riggers,” said Christopher Machut, chief technology officer, Netarus. “A crane operator with the aid of a safety camera system such as HoistCam can see the rigger on the ground and the area around the load - especially in blind lift situations. This increases the confidence and reliability of the operator when performing the lift and during all phases of a crane’s mobilization, operation and demobilization.”

Machut said these tasks can include:

When an operator is able to see more on the jobsite, he or she becomes more confident in the lift, said Machut, thus improving productivity.

“When an operator cannot see, he or she may move significantly slower because of not knowing what is transpiring in and around the load and those around,” he said. “This increases the return-on-investment of deploying a camera system by allowing the operator to move onto the next task faster – and more importantly, safer.”

Cameras on a crane, transport system or construction site can also help with training and site management by:

“Because there is no installation, internet or wiring required the uses in the construction industry are limitless,” said Melissa Thompson, PhD and CEO, Hyndsight Vision Systems. “A real life example of our technology and use on cranes is currently being used by Walsh Construction in Newburyport MA. They had an issue with their Mijack cranes where the cables would snag or fray while elevating and lifting steel girders for bridge construction. These cranes are 80 feet high and if the cables got bound up they could be down for weeks at a time and have to have cables replaced in some cases. We placed eight systems on their cranes about eight months ago so they could see if the cables were not coiling properly before the issue caused crane failure. They have been running full time around the clock in sleet, freezing rain and snow, and only took a few minutes to install at each location. Walsh Construction has been able to reduce their downtime by being able to monitor the cables real time.”

Hyndsight cameras were designed to be portable and can be moved from one location to another quickly.

“They offer a unique solution for rigging issues, monitoring oversize loads in transit as you move the cranes from one location to another, and act as a backup camera in that use case,” said Thompson. “If you need to visualize any area of an operation Hyndsight is an immediate solution. They broadcast up to one-third of a mile away from camera to monitor so distance is not an issue.” 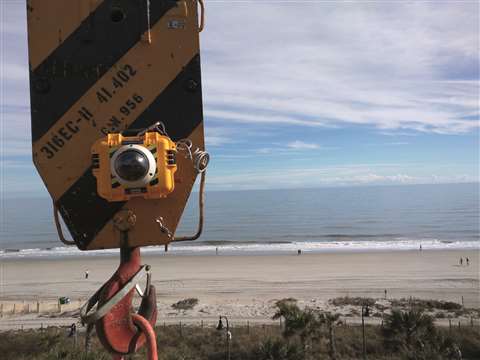 More than just a real-time visual aid, camera systems combined with analytical software tools, broaden the safety, productivity and risk management capabilities for crane users and contractors, according to Christopher Machut, founder and chief technology officer for Netarus, which manufactures and HoistCam and HoistCam Director.

Hyndsight also has a recording-capable product so that videos can be used to show to OSHA or for safety monitoring.

“Hyndsight cameras and monitors offer crane operators and site managers with the ability to monitor and to optionally record work environments,” Thompson said. “They are not limited to being mounted on cranes and our cameras can be permanently mounted and hardwired if desired. Our systems run off of rechargeable batteries but also offer full time power as well as solar power options. No matter if a crane operator or manager uses it, Hyndsight offers a tool to see safe and monitor the work environment.”

Hyndsight cameras also serve as training tools because they offer full recording capability with removable SD cards. Workplace events can be used to train others on what to do or not to do.

Peter Hird, managing director, Compact Lifting Group, maker of the BlokCam, said that users of their products report that cameras on cranes and the jobsite maximize safety, improve vision and help eliminate the ‘blind’ lift.

“A high percentage of tower crane related injuries are caused by uncontrolled loads striking personnel in the area surrounding the hook block,” said Hird. “This is an extremely hazardous area where 21 percent of injuries occur. Having a camera system fitted, the operator can see that zone to make the necessary corrections to avoid any incidents. Camera systems provide the crane operator the ability to communicate to the banksmen (riggers), slingers and signallers with any information necessary to move from point to point in a more controlled environment, and enhances the ability to communicate more efficiently.”

He explained that camera systems are a visual aid and help position the hook block into the required position whilst working in tandem with the instructions given by the banksmen/slinger over the radio, complimenting and confirming the correct position, keeping a steady flow of continued and sustainable lifting tasks, helping to increase productivity.

“Camera systems give a close-up view of the load below the hook and surrounding area, which gives the crane operator more situational awareness, allowing an increase in speed and accuracy in all scenarios,” Hird said. “This will improve the lift efficiency and reduce time in task completion.”

The increase in productivity could be measured in hundreds of man hours saved and a more controlled utilization of equipment, Hird said.

“According to a study in the Journal of Construction Engineering and Management, having a camera system installed on a crane can help increase productivity by up to 39 percent in the blind and 27 percent in the open as a direct result,” Hird said. “Crane operators have a lot of responsibility when operating a crane – long shifts in difficult conditions can cause additional stress, especially in all weather conditions. Cameras help to reduce this stressful activity by verifying the radio communications, bringing the operators that step closer to being in touching range of the load and site areas with a visual view that confirms the load’s security, balance and any hazards below and around the load.”

Hyndsight cameras were designed to be portable and can be moved from one location to another quickly, offering a solution for rigging issues, monitoring oversize loads in transit and acting as a backup camera.

Modern construction sites are becoming more and more congested and as buildings are going higher, crane operators are required to place their loads in even more restricted and tighter areas than before. The probability of impacts and collisions are still as great if not more so. Having a camera fitted with its clear and uninterrupted audio-visual feed allows the operator to respond to any adjustments to avoid any potential accidents before they happen, allowing for a safer and more productive lift.

Video footage from the camera can be recorded, and the video and images can be stored onto an SD-card that can continuously record days of crane operations, while overwriting the oldest recording as the card fills. By having recordings there is always a record of the lifts, so management can review procedures to analyze the lift strategies and make improvements on the way the crane is used, which can assist in risk management and safety and can also be used in training and site management.

BlokCam is also a wireless system that can be quickly and easily deployed to the hook block or boom tip of a crane. The sound and view from below the camera is then transmitted and received wirelessly via the antenna systems to a screen in the cab. This allows the operator to see and hear the load and surroundings, giving an unobstructed, live, audio-visual feed of the critical areas that working in the blind would never allow.

With a BlokCam installed, the benefits of improved communication and maximized safety all play their part in the contribution to the greater efficiency and enhancement to the productivity of the lifting tasks on any site, Hird said.

“If you can eliminate the blind lift, reduce any corrections and overshoots you will see a drastic improvement in the overall bottom line of that projects lifting plan,” Hird said.