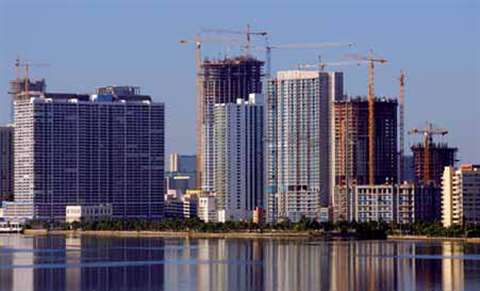 “That's what all these cities are calling themselves, the nick-name ‘Crane City,'” says Pat Gigante, sales manager of the Americas at MPS Tower Cranes. “Tower cranes are very visible and I guess everyone in a certain demographic thinks their city is distinct because it has more cranes.”

Chicago, New York, Boston, Houston, Austin, Denver, San Diego, Salt Lake City, Vancouver and Toronto may all be calling themselves Crane City, says Gigante, whose company had sold, worldwide, 130 used Terex Comedil tower cranes between January 1 and mid November 2006. “The majority of those 130 have come to the US or Canada,” he says.

Back in the 1980s, when tower cranes started to appear with regularity on high-rise building projects in American cities, the tall inverted L- shaped and V-shaped booms atop skyscraper jobsites were somewhat of an enigma. US contractors and crane rental companies were slow to embrace the machines, which had long been a mainstay on construction sites in Europe.

Not the case today, which is great news for the world's tower crane producers. “We feel it newsworthy that the tower crane has come into its own in the US,” says Clay Thoreson of Manitowoc Cranes, which manufactures Potain tower cranes in France. “Tower cranes are not only accepted, but have evolved into the ‘preferred tool' to use on a myriad of construction projects.”

Linden Comansa entered the US tower crane market in 2001 with the creation of Linden Comansa America. The company has been increasing its market share yearly. Matthew Dobbs, marketing manager, says, “The tower crane is definitely becoming more and more a recognized tool in the US for all kinds of projects. Its diversity is just now being realized and that they are very cost-effective machines to operate.”

Dallas-based Lewis Cranes saw the potential for tower cranes many years ago. “We saw the explosion of tower cranes in the early to mid 1980s in Dallas and the reason things dried up was because the Dallas economy slowed down,” says Lewis' Reno Russell. “Things didn't get going again [in the market for tower cranes] until the late 1990s and then 9-11 brought everything to a screeching halt again. But in the last three years, the market for towers has gone all out, full throttle.”

In addition, until three years ago, there were just a handful of dedicated tower crane rental companies in North America but, as demand has grown, many more players have come to the game table.

“We have more competitors because these companies have realized that their mobile crane fleets aren't as competitive, especially on projects where bigger, stronger and taller buildings are being built,” he says. “The bottom line is that for a company to grow, it has to have in its inventory the products of choice in the market. We've seen a lot of companies go after this market in the last few years because they have realized that tower cranes are the future.”

General Crane recently ordered 60 new Linden Comansa tower cranes, the bulk of them in the 300, 400 and 550 ton-meter classes. Delivery from Linden Comansa's manufacturing facility in Spain started in the fall and will continue into 2007. By the time all of the new units are in, General Crane will have a fleet of more than 130 tower cranes, giving the company status as the second, or close second, largest tower crane company in the US (based on fleet size).

Both General Crane USA and Lewis Crane have been very strategic in building their tower crane fleets, sticking with one or two manufacturers.

“We chose the Linden Comansa for several reasons,” says Robertson. “We have used these cranes for years and the new models are performing very well. Also, we prefer the flat top modular system design, allowing us to match components of different sizes to configure the machine the way our customer needs it. We also view them as the safest crane to erect.”

When Lewis Crane first got into the business of tower cranes, by acquiring small crane companies here and there, it amassed a number of brands and types of tower cranes. “When we started, we bought everything and anything,” Russell says. “We were looking for availability and in that case you buy what is available. We'd buy this company and that company and with those companies came various fleets of tower cranes.”

But Russell says being a grocery store of several types of tower cranes proved to be inefficient. “It's not the best scenario because you have 12 different models of 12 makers and all your technicians have to be trained on all of them,” he says. “So we have chosen a couple of brands to focus on in order to utilize and inventory parts more efficiently.”

Over the last few years, Lewis has sold off $5 million in used tower equipment and used the profits to invest in two flat-top design crane brands, Terex Comedil and Sun Crane produced by Fushun Yongmao Construction Machinery of China. Lewis is responsible for the Chinese cranes' entry in the US market in 2005.

Russell says owner Kyle Lewis wanted to develop a unique niche so he sought out the Chinese manufacturer four years ago. He shared with them OSHA and ANSI specs and helped them to design a tower crane with the types of motors and gears and other attributes that would make the machines a custom fit to the American market. The company offers six models that range in size from 4 to 24 ton lifting capacity and are equipped with the latest drive and control technology.

Like Lewis Crane and General Crane, Morrow Equipment also sticks to a leading brand of crane, namely Liebherr. The largest tower crane rental company in the country and the exclusive Liebherr distributor for the US, Canada, Mexico, Australia and New Zealand, Morrow operates a fleet of some 450 tower cranes, most of which are Liebherrs. They still rent some older model Pecco and Wolff tower cranes.

Morrow's Bob Grondin, based in the Miami area, says his company has a market share of well over 50 % and perhaps close to 70 % in that tower crane hotspot, southern Florida.

“In our company we are in districts and the Miami District is the largest market at this time for the company,” says Grondin. “In the Miami-Dade, Broward and West Palm Beach counties, we have 80 to 90 cranes out on rent and working.”

It has been estimated that there are as many as 300 cranes in the skies and working on high- rise condominium and commercial projects in the Miami region alone. Tower cranes are working on large and small jobs and follow the long and scenic coastline of Florida. On a one-mile stretch on Daytona Beach, one can see seven tower cranes working on low-rise condo projects. Maxim and All Erection have cranes working in that area, mainly because demand has been so high that tower cranes are being hauled in from Ohio and Pennsylvania. While the Florida market is still quite vibrant, most everyone in the tower crane business in that region is expecting a slow down because at some point saturation will happen.

The goal of manufacturers, who have enjoyed healthy backlogs throughout 2006, is to assess how many tower cranes are too many. “Our backlogs, at this time, remain pretty steady,” says Thoreson. “This may be partially due to our product diversity. We do, however, expect the demand pendulum will eventually swing back towards the center. The question is when, and for how long. We remain optimistic though, as our economy has shown it can weather some adversities.”

Tower crane demand is still growing in regions across the country, and not just in downtown areas on high rise buildings. In addition, there are still new markets to pursue, especially in the market for smaller tower cranes.

“There is still much need for expansion across the country, especially at universities, for hospitals, museums, infrastructure projects, entertainment and resorts,” says Russell at Lewis Equipment. “You used to only see tower cranes in heavily populated areas. Today they are on smaller projects, too.”

Dobbs at Linden Comansa says that the market for smaller cranes is growing, especially in the Linden Comansa 500 series line, with capacities of 35 to 52 metric tons. “We are seeing that it's a new tool in the market,” he says. “They are being used on buildings that are eight to 10 stories, a job that you normally wouldn't see a tower crane on. Cranes in this size have been very well received. This market is in its infancy state.”

For the most part, the smaller self erector cranes do not compete in the same market as tower cranes. “Most of the time, there's a different customer for the self erectors and the smaller cranes,” Dobbs says.

While only a handful of manufacturers are aggressive in the tower crane market in North America, namely Liebherr, Manitowoc Potain, Terex Comedil and Terex Peiner, Sun Cranes (Fushun Yongmao) and Linden Comansa, there are sure to be more tower crane manufacturers in the mix in the coming years.

Such is the case for Wilbert Cranes of Germany, which according to Gerry Wiebe, vice president of Koenig Cranes North America, has partnered with Wilbert to become their master distributor for the US and Canadian markets. “Our first Wilbert Crane went into service on a concrete project in Vancouver about six months ago and our second Wilbert tower crane is going into service at the University of British Columbia in early December,” states Wiebe. “Our goal was to sell a few and then to role model them to potential buyers and dealers, that strategy is working out quite well.”

Based in Germany, Wilbert entered the tower crane market in Europe as a tower crane rental company, Wiebe explains. “Now they evolved to become a manufacturer with a focus developing and building tower cranes that maximize the rental process,” he says.

“The goal at Wilbert Cranes is to build a crane that is fast to mobilize and demobilize and which transports in significantly fewer loads than the industry standard, these factors save the crane owner both time and money thus making them highly competitive.” Wilbert, which recently expanded its German operations, offers a line of five flat top models, with two new models on the drawing board and set to be introduced in 2007. Wilbert also manufactures two large-scale capacity towers, in the 560 and 650 ton-meter class, which are in the traditional pennant line erector design.

The Potain line of tower cranes is also getting good exposure in the US. “Our MD 485B is doing well,” he says. “It is a crane designed for the North American constructor with features that they have grown very fond of. Our luffing boom tower cranes have also proven themselves as a valuable tool in our construction industry.”

Last month in Europe, Manitowoc dbuted the Potain MCT 88, the first flat top tower in the MC range from Potain. Thoreson says this crane will be introduced to the US and all the Americas in 2007.

Morrow's Grondin says the Liebherr 316 EC-H and the 420 EC-H are the cranes of choice of his customers. “We have quite a few brand new cranes that are getting a lot of attention with their sophisticated electronics,” he says. “These cranes are very efficient and safe. The tower crane is now recognized as a very cost efficient machine on a jobsite.”