Power plant and refinery lifting requires expertise far beyond that of many other projects. Some power plants and refineries will only work with crane companies that have been certified to work at their facilities. 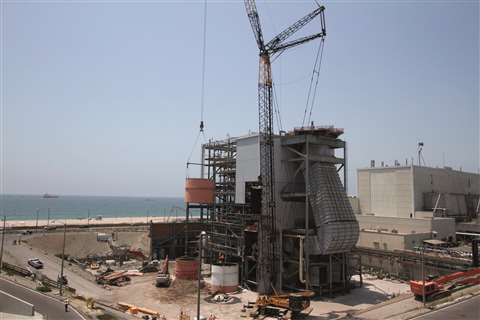 Bragg’s Liebherr LR1400/2 was rigged to a height of 395 feet to demolish a stack unit at LADWP Scattergood Power Plant.

For the most part, these jobs require heavy lifting using high capacity cranes and detailed lift plans that specify the cranes’ every move. Seven companies responded to our request for information about recent jobs. Following are overviews of these compelling projects.

Irving Equipment was contracted to assist in the installation of a 63,000-pound fish collection screen at the NB Power Tobique Narrows Dam, a hydroelectric dam in northwest New Brunswick, Canada.

The challenge was to position the collection screen directly under the bridge on which the cranes were located. The solution was custom slings and a custom beam with sheaves that allowed the rigging to travel under the bridge.

Due to the width restrictions of the bridge and a requirement for additional capacity during the initial lift, the VarioBase mode on the Liebherr LTM1200-5.1 was used.

Staying true to its belief that proving a lift solution works and shouldn’t wait to happen on the jobsite, Irving’s crew double checked the lift solution using Liebherr’s Liccon planner software to verify the crane capacities.

Bragg supplied its Liebherr LR1400/2 that was rigged with 184 feet of main boom and 207 feet of luffing jib to remove the top sections of the stack. Due to the height of Bragg’s crane at 395 feet and the proximity of the Los Angeles International Airport runway, much coordination was needed.

Bragg’s Project Manager Cristy Clark had to communicate daily with the LAX control tower as to when it was safe to boom up the crane. Heavy air traffic and coastal fog played a huge role in when Bragg was allowed to operate the crane.

Once the top two sections were removed, Bragg decreased the luffing jib to 115 feet to complete the tower demo. Beyond the tower removal, Bragg’s team removed duct work, a 200,000-pound overhead gantry crane, various structural steel pieces and a transformer.

In addition to the crane, Bragg supplied all the rigging and completed several engineered lift plans to be approved by the general contractor and the plant. The project was completed safely and on time.

Tropical Storm Harvey devastated the upper Texas Gulf Coast almost a year ago. The effects of the flooding were felt throughout the region including the power transmission infrastructure. 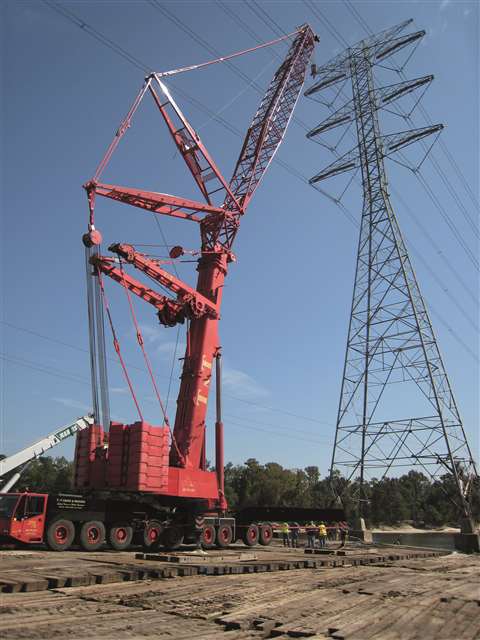 TNT’s 800-ton Demag AC700 held the tower in place as the powerlines were removed and installed on a temporary tower.

Centerpoint Energy had transmission towers that supported powerlines across the Trinity River in Northwest Houston. Before the tropical storm, one of the towers was located 20 feet from the water’s edge onshore. During the storm and following the flooding, the shore was eroded to such an extent that once the water level receded, the tower was located in the river approximately 20 feet from the shore.

The main concern in decommissioning the tower was how to safely remove the de-energized powerlines. Removal of the heavy powerlines from one side or another of the unstable tower could potentially cause it to tip over and collapse. The solution was to have a crane hold the tower in place, keeping it stabilized, as the hefty powerlines were safely removed.

This particular tower measured 210 feet tall and an expected 90,000 pounds of tower and lines needed to be supported. The crane would operate at a 100-foot radius, a safe distance from the river.

TNT Crane & Rigging was awarded the job and its 800-ton Demag AC700 was chosen for its capacity.

The crane was rigged with 124 feet of main boom in the super lift configuration, 118 feet of luffing jib and 264,600 pounds of counterweight was used to hold the tower in place as each line was removed.

With the solution determined, the next challenge was getting the equipment to the site. The tower was located about two miles from the nearest access road in a remote part of the Trinity River flood plain.

Two full miles of mats were laid to form a temporary route from the access road to the work area. A double layer of mats was laid at the worksite due to soggy ground conditions.

Centerpoint set temporary concrete towers to support the de-energized lines behind the crane. Once they were in place, TNT held the tower as the lines were removed and installed in their new temporary location, allowing a new redesigned permanent tower to be constructed.

The planning, teamwork and creativity of all companies involved in this project resulted in a safe resolution to a dangerous situation created by Mother Nature.

The Bayway refinery in Linden, NJ needed to replace the reactor in its FCC unit, the largest FCC unit in the Western Hemisphere. This was likely the first time that such a reactor lift has been contemplated.

Lampson has completed projects at Bayway starting in 1996, and has a good relationship with the refinery staff as well as other contractors involved in the lift.

Bayway contacted Lampson in 2013 regarding the replacement of the reactor. During the intervening time period, Bayway Engineering, Nooter Corporation and Lampson’s engineering team worked to solidify the project’s challenging lift requirements.

The Lampson Transi-Lift LTL-2600B was chosen as the crane best suited to accomplish the lifts for the project.

The Transi-Lift would be configured with 400 feet of main boom, 230 feet of mast and 120-foot stinger length. A jiblet was also fitted to the boom that functioned as a fast line capable of lifting a maximum of 286 tons. The main boom capacity was 1,300 tons maximum.

Nooter Engineering would originate and coordinate all rigging and engineering efforts in concert with refinery engineering and Lampson International.

The Transi-Lift completed a test lift of 1,202.25 tons at a 170-foot radius, duplicating the conditions expected during the new reactor set.

After the old reactor was removed, a 565-ton lift at a 281-foot radius, the FCC was prepared to receive the new reactor. The lift conditions within the refinery required a lift radius of approximately 270 feet for the main lift with a total lifted load of 850 tons for the reactor lift.

The new reactor was prepared for the lift and the rigging was attached.

The reactor was lifted at an initial radius of 141.8-feet and translated to the required lift path. It was then boomed out to the final set radius of 269.1 feet and set in place. The lift took minimal time due to foresight by the Bayway and Nooter Corporation engineering in preparation of the lift site.

The final lift utilized 90 percent of the crane’s capacity, leaving plenty of residual capacity if required.

This was a project initially contemplated in 2013 and started with a refined schedule in September of 2017 and completed ahead of schedule in March of 2018. This was also an accident/incident free project for Lampson with over 10,000 man hours expended.

In the air rigging

Mammoet recently completed the demolition and replacement of five heater furnaces in the center of a congested, 86-year old plant in Texas City, TX. 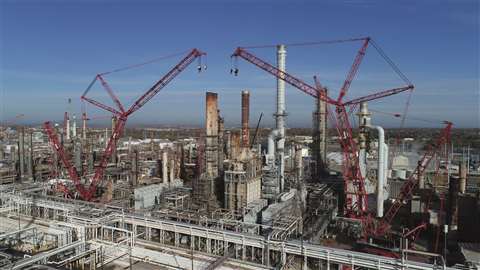 The dimensional constraints in the refinery made crane construction a challenge as there was no available space to lay down the boom and jib. Mammoet’s ability to construct two Terex CC8800 cranes mid-air and safely maneuver them in such a tight space meant larger sections of the furnaces could be salvaged and installed. This approach helped cut the project’s duration by more than one month and get the refinery back online sooner.

The eastern placed CC8800 jib was installed while suspended in the air by two cranes while the western-placed CC8800 jib and the main boom were assembled mid-air above inactive pipe racks. Once completed, the two CC8800 cranes were able to make more than 50 critical lifts over several months.

The new furnaces will feed into a single stack and increase the efficiency and production capacity of the refinery.

After the cranes were assembled, they made lifts ranging from 50 up to 130 tons, always operating separately. There were no tandem lifts other than during the crane assembly.

The East Bend Station in Union, KY is owned and operated by Duke Energy. Recently, Maxim was asked to help with a large outage with a complete tear out and replacement of the precipitator along with a boiler outage.

The job officially started on March 12, 2018 and is projected to take about eight months. Maxim has partnered up with Saulsbury Industries as well as TEI/ Babcock Power, Bowen Engineering, Patriot Industrial and Chattanooga Boiler & Tank. 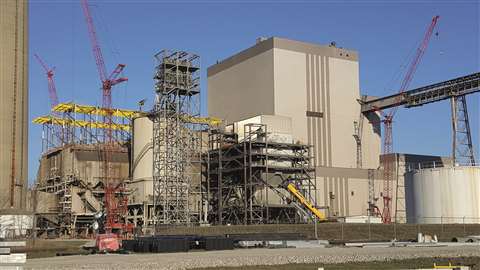 Maxim cranes are asisting in the tear out and replacement of a precipitator and a boiler.

When the new HRSGs are in place, the plant will generate 450 megawatts of clean and reliable power – enough to light more than 400,000 homes and businesses throughout Orange County and the Los Angeles area.

Starting with the offloading of the 16 HRSG modules from the heavy lift ship, Bigge hauled each of the 550,000-pound modules some 25 miles from the port to the jobsite utilizing a 13-line dual lane Goldhofer trailer. The transport system had an overall length of 210 feet and an operating width of 20 feet.

At the plant, Bigge utilized a 900-ton capacity Enerpac hydraulic gantry to transload each HRSG unit onto a 4-file, 16-axle Goldhofer modular transporter, and then carefully transported from the transload area to the center of the plant.

Bigge hoisted and set each of the HRSG modules with a 771-ton capacity Manitowoc MLC650 crawler crane in a Series 3, VPC Max configuration. With the HRSG units measuring 104-feet tall, the payload of each lift was approximately 600,000 pounds including block and rigging. Once safely rigged and in proximity to the crawler crane, each HRSG was tripped to a vertical position, then swung into place at its destination within the boiler unit.