“Our latest orders reflect the strong demand in our territory for Terex tower cranes from both existing as well as new customers which is a testament to Terex tower cranes performance, reliability and continuous innovation that leads the market,” said Bill Finkle, president, Cropac. ”Cropac Equipment prides itself in its after-sale service support and ensuring that we always have the right crane for our customers when they need it and the broad tower crane product offering from Terex allow us to do that.” 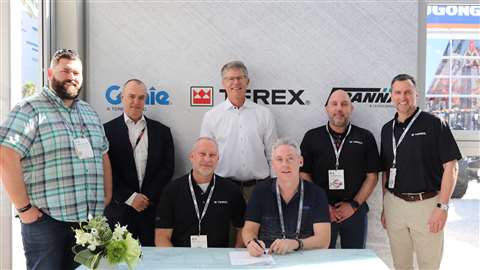 Cropac will add 16 new Terex tower cranes to its fleet.

Cropac purchased the Terex SK 415-20 models as well as models of the recently launched CTT 472-20 flat top tower crane. The new crane crane features 11 jib configurations (from 98 to 262 feet) and a maximum 22 tons and up to 4.9 tons at maximum jib length. The control system ensures easy and quick setup and the power plus feature, which includes the new T-Torque slewing technology. The new inverter technology with torque control applied directly to the slewing motors gives the operator improved control over crane movements, the company said. It allows the operator to customize gear speed, acceleration and counter-manoeuvre, based on operating conditions, such as load type or wind speed.

“CROPAC’s commitment to Terex tower cranes, their excellent after sales support and technical service has made them one of our top performing distributors in North America,” he said. ”We appreciate their focus on developing the tower crane business in the eastern Canadian market over the least three years and their hard work has contributed to significant market share growth”.

Also included in the multiple Cropac order were the CTL 272-18 luffing jib tower cranes, which are well suited for working in urban environments, have a maximum capacity of 19.8 tons and a jib tip capacity of 3.2 tons at 200 feet of jib with single line pull. Multiple tower masts options, to leverage existing stock, easy setup, power plus and auto-levelling are all part of the CTL 272 product offer, Terex said.

“We have seen an increase in demand for luffing jib cranes due to enhanced work area restrictions and having a comprehensive luffing jib offering from Terex ranging from 11 to 72 tons as well as new hydraulic luffer technology first introduced on the CTLH192-12 (13.2 tons) will allow us to continue to meet our customers’ evolving lifting needs,” said Cropac Business Development Manager James Graham.