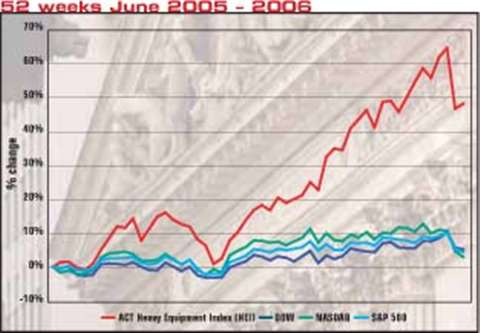 Higher than expected inflation figures released in late May took a big bite out of the gains racked up on Wall Street over the last 12 months. All the indications had been pointing to a slow-down in interest rate hikes, but fast rising prices could prompt the Federal Reserve to continue to raise the cost of borrowing, rather than let it stabilize around the 5% mark.

This is bad news, but you would hardly think it's the end of the world. So why did it result in the major indexes losing up to the last six months' gains?

There was clearly an element of profit taking in May's decline. Investors have made a lot of money ‘on paper' in the rally of the last few years, particularly those that have invested in the choice stocks in the heavy equipment sector. The trick here, of course, is to sell at the peak and turn those paper profits into cold hard cash before the markets take a dive.

That seems to be what happened in late May. Investors took the bad news on inflation that the economy and markets had peaked (for the time being at least), and sold-off their shares in a ‘quit while you're ahead' mentality.

This sell-off impacted on equipment manufacturers' shares, with ACT's Heavy Equipment Index suffering its biggest ever one-week fall. The Index dropped from its all-time high of 160.95 points down to 143.5, almost an 11% decline. This was much steeper than falls that week for the mainstream indicators like the Dow (-4.3%), NASDAQ (-6.4%) and S&P 500 (-5.3%).

Given the HEI's market-beating rise over the last year or so, it's reasonable to expect that any falls will also be more pronounced than those of the mainstream indicators. This is the nature of cyclical businesses like heavy equipment - when economic growth hits a certain point in the upswing, customers buy like crazy. However, when the economy turns down big capital investments dry up very quickly.

There will almost certainly be a period of volatility following May's decline. A heavy sel-off normally leads to shares becoming under-valued at some point, and investors tend to buy back into a market if they see a bargain.

Longer term, a lot will depend on further economic data and, of course, the half-year results that are due out over the summer months. These will indicate whether the recent dip was just a hiccup, or whether it was the start of a cyclical decline.