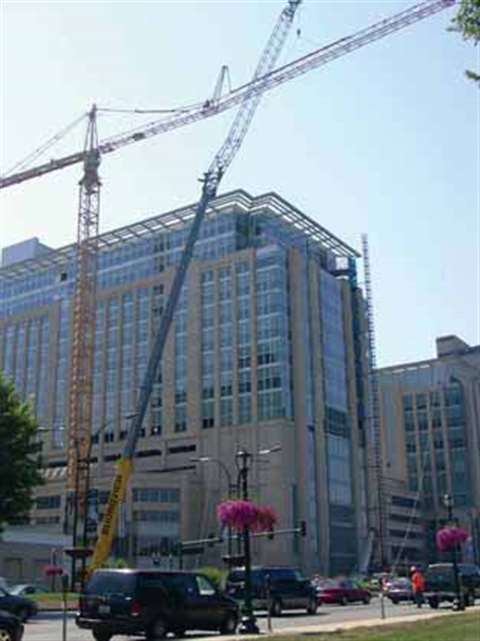 Disassembling a tower crane at a hospital in St. Louis was quite a challenge because routes to the emergency room couldn't be blocked, an emergency helicopter ambulance service operates on top of the

In early June, St. Louis-based Budrovich Contracting unveiled its brand new Grove GMK7550, using it to disassemble a Liebherr 550 HC 20 tower crane at the Washington University School of Medicine Northwest Tower addition. Claiming the machine is the largest AT in Missouri, Budrovich vice president Darren Jaycox says the job presented several challenges because of the location at a hospital.

Working for McCarthy Construction, the Budrovich team created a comprehensive communication plan that had to be coordinated with the Helicopter Emergency Air Evacuation landing pad on top of the adjacent building. Plus, there were other issues: The parking garage at the Northwest Tower needed to remain open, restricting the street to one lane, which was immediately adjacent to the set up of the GMK7550.

The emergency department at the hospital was also in the path of disassembly, and that route had to remain open at all times. To compound matters further, a MetroLink light rail tunnel ran diagonally through the jobsite which restricted setup of the 550 by a full three feet.

Budrovich and McCarthy decided that the new GMK would be the ideal solution as its capacity and reach would save two days of jacking the tower crane down to the point where a GMK6350 could disassemble it adequately. In addition, at the full height, two 38,000 pound sections of the tower crane could be picked at a 63 foot radius.

Budrovich configured the crane with 179 feet of main boom, 118 feet of fixed jib and 132,000 pounds of counter-weight. According to McCarthy equipment manager Fred Kern, “It saved us two days of jacking and $15,000. I was amazed at how well it fit into a tight logistical situation.”

With a tip height of 430 feet, including jib attachments, the “behemoth” GMK7550, as Jaycox describes it, is 86 feet 6 inches long, has eight axles, a three axle dolly and a maximum of 352,700 pounds of counterweight. He says Budrovich expects to utilize this crane in many applications, including refinery, power plant and nuclear plant work.

“Previously very large jobs, which required a lot of reach combined with heavy weights, would require a helicopter to make the picks,” he says. “We feel like there is no job in the metro area we can't do now.”

In addition, Budrovich expects to find new niches for the large crane. “There are billions of dollars being allocated by major oil and energy companies to reduce emissions,” says AJ Ford, vice president of marketing for Budrovich. “There is a big push in bio-fuels, wind energy and nuclear power taking place and vast amounts of construction money are headed into those industries. We believe there will be long term industrial opportunities for us to take advantage of.”

Because the states of Missouri and Illinois do not require the boom to be launched and travel on separate tractor trailers, the crane is roadable with the main boom installed. “This option saves us several hours to re-install the boom during set-up and it will not require the added costs of mobilization,” says Jaycox.

Budrovich specializes in crane rental, site utility excavation, mass and finish grading, and residential, commercial and industrial land development. The company has close to 150 employees and owns 40 mobile hydraulic cranes and around 90 pieces of excavation and grading equipment.