Cross country or overseas, breakbulk cargo can be offloaded at nearly any port in the world. But this kind of cargo often tests the boundaries of modern transportation as girders, steel, heavy-duty manufacturing equipment, wind turbines and other oversized machinery are shipped as-is. This results in specialized transport companies having to think outside of the box, quite literally. 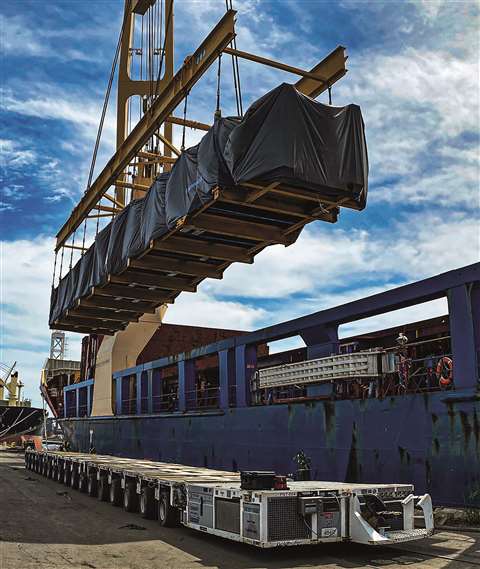 Edwards Moving & Rigging was contracted to receive 24 HRSG-Modules and two HP drums from ship’s gear to their 18-line Goldhofer PST.

Breakbulk shipping enables companies to transport equipment without breaking it down, streamlining the entire process. The equipment is then offloaded, transported and delivered. But what seems like a cut-and-dry process requires immaculate planning and impressive feats of engineering.

ACT surveyed companies across North America to reveal the details on some of the latest breakbulk projects.

From ship to site

Edwards Moving & Rigging was contracted by a large OEM to receive 24 HRSG-Modules and two HP drums from a ship’s gear to their 18-line Goldhofer PST. After receiving the modules at the Port of Burns Harbor, IN, Edwards transported the components to a staging area where they were set on pre-staged grillage provided by Edwards.

The real challenge of the project was over-the-road transport. Since Burns Harbor was the closest port capable of handling a project of this size, the route required travel across northern Indiana and into southwest Michigan to the new construction site. The distance was right at 100 miles and the modules weighed up to 613,766 pounds. To obtain a permit to cross the bridges along the route, Edwards engaged the services of Michael Baker International. They spent considerable time doing bridge analyses with multiple configurations, arriving at a four-file 18-line Goldhofer platform trailer as the configuration that would pass bridge requirements and navigate the route to the site. The loads were powered by three C500 Kenworth Prime Movers, and with all equipment connected, the overall transporter length was 249 feet 1-inch. A major road construction project required the transit to go north of the site location and then back down through several small towns to the combined cycle plant.

Edwards set up its J&R 550-ton gantry at the port to transload the HRSG modules from the two-file spacing in the storage yard to the four-file configuration for over-the-road transport.

The schedule was established that each day a load would travel from the port to the site, and the following day while the empty trailer was returned to the port, the next loaded trailer made the transit. This required Edwards to maintain on the project 90 lines of Goldhofer and six prime movers for the duration.

Edwards carefully observed the CDC’s pandemic guidelines and completed this project with no time lost due to Covid-19 infection. The project overall was a profitable project completed on budget, ahead of schedule and with no damage to public property or to any of the components.

Mammoet USA South successfully offloaded a 280-foot-long vessel at the Port of Beaumont, TX. The vessel weighed 1.85 million pounds and was offloaded using 72 axle-lines of SPMT. 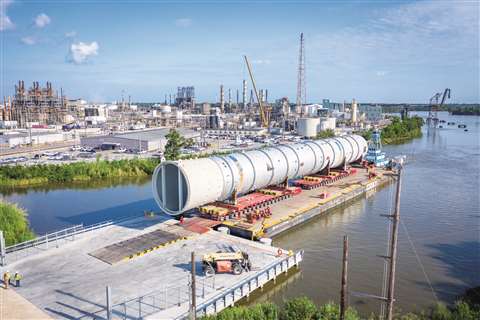 Mammoet teams successfully offloaded a 280-foot-long unit at the Port of Beaumont in Texas. The vessel weighed 1.85 million pounds and was offloaded using 72 axle-lines of SPMT.

“Mammoet’s biggest challenge for the offload was the engineering and field work to lay out the barge and trailers to accommodate T-1002,” said Greg McCauley, a project manager for Mammoet USA South. “Ballasting calculations were critical, and all staging material and trailers had to be exact. Because the vessel was offloaded directly to the barge and trailers, all ballasting had to be accomplished in advance. Luckily, our team was spot on, and everything was flawless.”

Mammoet was responsible for the barging, transport and setting of modules up to 3 million pounds as well as several reactors and columns weighing up to 2.5 million pounds.

“The sheer size both in weight and dimension of the cargo was the biggest challenge, yet through clear and open communication between the several different teams involved, the offload really went smoothly,” added Garret Holub, a project engineer for Mammoet USA South.

A technology company was in the midst of expanding a microprocessor development and manufacturing facility in Oregon. To support their growth and expansion, they needed to add two adsorbers to the facility. That’s where the Portland-based Omega Morgan specialized transportation crew came on the scene, tasked with transporting the adsorbers to their yard before sending them on to the final destination at the manufacturing facility on their scheduled delivery date. 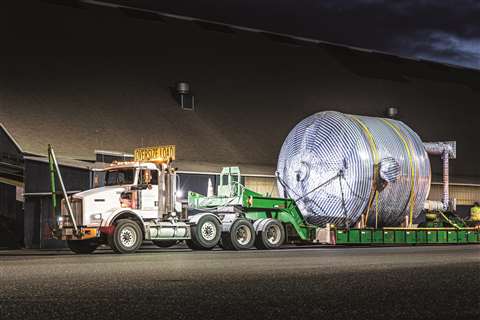 Omega Morgan’s crews needed to plan for street widths that could accommodate the load, traffic congestion along the haul route and aligning the manpower and equipment requirements for the heavy haul.

Getting the tanks from the Port of Vancouver, WA to Omega’s yard in North Plains, OR required some careful planning. There were four adsorbers to transport, each weighing approximately 68,000 pounds, with dimensions of 16 feet wide, 16 feet high and 24 feet long.

Omega Morgan’s specialized transport service crews needed to plan for street widths that could accommodate the load, traffic congestion along the haul route and aligning the manpower and equipment requirements for the heavy haul. The company worked alongside the state and county to acquire the proper permits for a load of this size.

The other challenge was the way the adsorber vessels would need to be transported. Since they could not be loaded on double-drop trailers, Omega Morgan needed to use specialized tank trailers to transport the loads safely and properly. This meant making two overnight trips to move the vessels to the yard in North Plains.

Using a 4-axle tractor and the two tank trailers, the Omega Morgan team successfully delivered the four adsorber vessels from the Port of Vancouver to their yard over the course of two evenings, in less time than planned. The specialized transport went smoothly and without incident, and the Omega Morgan crane services team was also there to support the offloading of the vessels, as well.

Barnhart was hired to transport a 129-foot-long absorber vessel from a fabricator in Winterville, NC across the country to a chemical plant in Beatrice, NE. The vessel weighed 138,271 pounds.

Barnhart transported a 129-foot-long absorber vessel from a fabricator in Winterville, NC across the country to a chemical plant in Beatrice, NE.

In Winterville, the vessel was loaded onto the trailer with the fabricator’s crane at the site. It was to be transported on a 4-axle tractor with a 9-axle steerable dolly making the overall transport dimensions 175 feet 10 inches by 11 feet 4 inches by 15 feet with a weight of 229,500 pounds.

The heavy haul project encompassed a 1,500-mile journey across four states at an average speed of 50 mph. Barnhart lined up permits and police escorts along the way and faced inclement weather. There were several tight turns, but preplanning and a turn analysis ensured they could be made. Some road signs were removed to allow for clearance. Barnhart’s Lincoln, NE team met the trailer at the site in Beatrice and offloaded the absorber at the plant.

Bellemare Heavy Haul & Rigging was contracted to move 60 wind turbine tower sections from the tower manufacturer to a loadout facility at the Port of Matane, Quebec. Each tower section weighed 176,370 pounds and clocked in at 118 feet long. 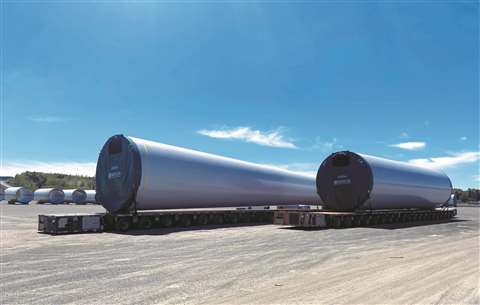 Bellemare Heavy Haul & Transport was contracted to move 60 wind turbine tower sections from the tower manufacture to a loadout facility at the Port of Matane, Quebec.

The tower sections would then be shipped to Grande Anse, Quebec. Due to a last-minute change in the scope of the job, the schedule was increased from a two-week job to a three-month job and the amount of equipment required doubled. However, Bellemare Heavy Haul & Rigging was able to save three weeks on the overall schedule by pre-staging tower sections at the loadout site so that loading onto the barge could be continuous.

This job presented several challenges, including the changing barge schedule. The load out also could not interfere with the railway operations at the port. Close coordination with local authorities was essential for conducting traffic control on one of Quebec’s main highways.

Emmert International recently purchased one of the first Goldhofer P12 platform trailers to be delivered to the United States. The 5th wheel gooseneck design allows for a simplified trailer operation to reduce manpower requirements and make the transport process more efficient. 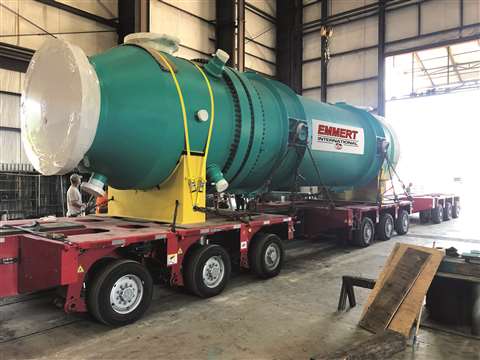 Emmert International was tasked with transporting a “super heater” from Mississippi to the Port of Houston. The heater weighed 120,722 pounds.

Emmert International was tasked with transporting a “super heater” from Mississippi to the Port of Houston. The massive heater measured 35 feet 8 inches long by 9 feet 2 inches wide by 10 feet 2 inches high and weighed in at 120,722 pounds.

The Goldhofer P12 trailer was the ideal unit for the job. It can accommodate permitted loads up to approximately 200,000 pounds. The P12 trailer is fully steerable and can be bolstered, with turntables, to accommodate longer components. In addition, the trailer can be retracted for transport to make unladen permitting easier. Whether receiving from a ship’s hook or utilizing the approximate two feet of hydraulic stroke to self-offload cargo, the P12 is one of the most versatile and cost-efficient trailers in its class, Emmert said. Emmert maintains an extensive heavy haul trailer fleet to accommodate any cargo configuration weighing more than 200,000 pounds.