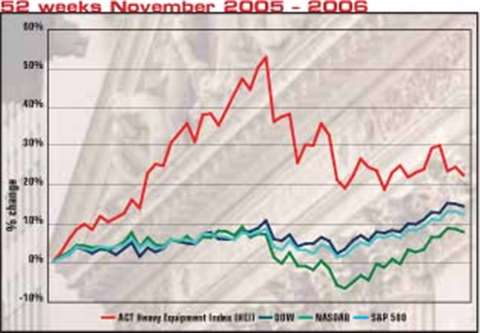 On the face of things, Caterpillar's third quarter results made for cheerful reading. Revenues were up +17% and net profits up +15% compared to Q3 2005. The world's largest construction equipment manufacturer is having its best year since the 1960s, with huge revenues and a net profit margin approaching 9% for the year to date.

But the results announcement saw a huge drop in Cat's share price. The day before its stock had closed just above $69, but the next day it closed down $59 - almost a 15% fall. This was due to Cat's outlook, which points to an end to America's most recent building boom.

Cat's results announcement triggered the biggest sell-off in the history of ACT's Heavy Equipment Index (HEI). More than 95.8 million shares in the companies that make up the HEI - worth in excess of $5 billion - changed hands that day, representing about 5% of the total value of the index. About 80% of this dollar volume was made up of Caterpillar shares.

In terms of the HEI, this was almost five times the average volume of $1.1 billion per day for the preceding month, and more than double the previous record for daily dollar volume. The sell-off saw the HEI slump more than 10 points, or about 8% in a day - again, more than twice its previous one-day fall.

The index has moved sideways in the two weeks since Cat's announcement, with no further falls. There is support around the 126 point mark, which is promising, as it is noticeably above other recent lows around 121 points, which were seen in August and September.

Cat and IR's results seem to reflect the difficulties of the housing market and, in that sense, they should not worry the lifting and transportation sector too much. Indeed, Q3 numbers from the likes of Terex and Manitowoc show, if anything, strengthening demand for cranes and healthy order backlogs. Both companies have been trading close to their all-time high share prices following their Q3 numbers.

This would all suggest that there are some different cycles at work in the construction industry. The light end of the business, dominated by housing, was the first to pick-up out of recession, and is now clearly on the way back down. However, the heavier end of the market, including the crane business, still seems to be on the way up and the size of order backlogs suggests this will continue into 2007.