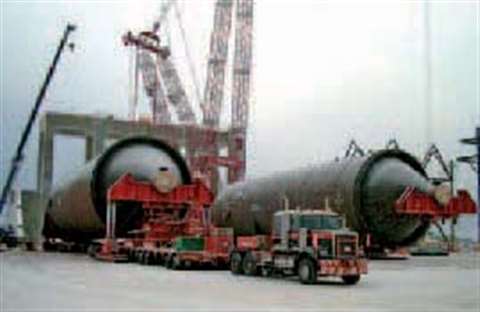 Canada is exploiting its vastreserves of oil sand and one of the largest schemes underdevelopment is the Horizon Oil Sands Project in the Province of Alberta. There, some 40 miles(70 km) north of Fort McMurray, Canadian Natural Resources Ltd(CNRL) is building facilities to produce synthetic crude oil (SCO)from oil sand. The production process requires the separation of raw bitumen from the oil sand. Following that, the bitumen isI upgraded using delayed coking and hydro-treating technologies. The company estimates that by the second half of 2008, the facilities will start producing up to 110,000 barrels of SCO per day.

Construction of the Horizon facilities is reaching its peak between February 2006 and March 2007 when some three to five oversized and heavy loads will be delivered per day. The total number of special and permitted loads for the project is estimated at 1,350. That includes many modularized loads and six so-called super loads. Four of the super loads moved earlier this year consisted of identical coker drums, each weighing 455 tons (413tonnes) and measuring around 141 feet (42.9 m) long and 31 feet(9.44 m) in diameter.

The weight and dimensions of the drums were a real challenge, plus each pair of cokers had to leave the manufacturers' location in Edmonton simultaneously, requiring a double set of transport equipment and a double crew. Mammoet Canada Western met the challenge and was awarded the contract by Technip Italy, which was responsible for the project on behalf of CNRL.

In January Mammoet's crew started preparing the first set of cokers at the manufacturer in Edmonton by fitting two specially designed and built saddles to each drum. Additional jacking wings were fitted to the front saddle attached to the cone of the drum. A pair of hydraulic gantries from an 881 ton (800 tonne) system was positioned underneath the front wings, while two 165 ton(150 tonne) capacity climbing jacks were fitted to the rear saddle. The equipment was supplied by Mammoet USA in Houston.

Jacking the coker up allowed two sets of trailers with turn tables to be maneuvered underneath to take over the load. The three-point turn table and saddle set-up also complied with the client's requirement not to transfer any torsional loads into the cokerdrum while in transport.

To comply with the road and bridge axle loading requirements, a double-width 10-axle line trailer was positioned underneath both front and rear saddles. Mammoet used the special Inter Combi, Canadian type, Scheuerle hydraulic modular platform trailers. They had an axle spacing of around 14.7 feet (4.50 m) between each pair of pendulum axles. In this way each coker would roll on 320 wheels.

The dimensions of a loaded up coker drum were impressive. Overall length reached 298 feet(91 m), including the standard tractor set-up of one pulling and two pushing side-by-side. Mammoet used 550 hp Kenworthand Western Star ballasted tractors. Travel width was 33.7 feet (11.5m) and it was 37.7 feet (10.3 m)high. The overall combined grossweight (CGW) was more than 881 tons (800 tonnes).

The extreme weight and dimensions required additional preparations, especially on the route out of Edmonton. Powerlines had to be lifted, temporarily removed orde-energized and traffic lights had to be turned or dismantled. Due to the extensive preparations and scheduling of all additional support, such as utility companies, police and pilot cars, both coker drums had to be moved out of the city in a convoy, stretching for more than 656 feet (200 m). To reduce disturbance to city traffic the convoy started at 10 p.m. on a Friday.

For the same reason, the highway department, responsible for almost the rest of the route, required the cokers to be moved two days apart. Therefore, one remained parked on the first stop over in Fort Saskatchewan. The highway was traveled during daylight.

With snow and ice, temperatures as low as -14 degrees F (-26degrees C), steep climbs and an average speed of 16 mph (25 km/h), it took five days to reach the site. The steepest climb was 12% and 1.8 miles (3 km) long. It required up to six tractors totaling 3,300 hp. Due to the combined gross weight, all bridges on theroute had been engineered prior to the move and some were close to their capacity. Therefore, an independent engineering firm was required to control and supervise most of the bridge crossings. The final 16 miles (25 km) were traveled along the purpose built Horizon Access Road that includes three bridges, one of which is a four-span 859 foot (262 m) long structure. It crosses a valley and the McKay River 131 feet (40 m)below.

On site the jacking crew tookover and offloaded the coker drums using a second and equivalent set of hydraulic gantries and jacks. Within a day the trailers headed back to Edmonton to load the second pair of cokers.

Another fabricator, based further into the city manufactured the second pair of coker drums, meaning a longer journey out of the city. To avoid interfering with morning traffic and to reach the first stop in one night, the City of Edmonton gave special permission to leave earlier than normal. Just as a precaution, additional traffic lights were removed to guarantee a flawless transport operation. This paid off as the city limits were reached with time to spare.

The second pair of cokers was also delivered safe and on time, despite a one-day delay due to weather. The temperature fell to-31 degrees F (-35 degrees C), which is below the safe operatingtemperature of the equipment.

Once the cones of the cokerdrums were insulated, Mammoet'sheavy lift division installed thecokers and other modularized structures on top of a high concrete structure using a 1,763 ton (1,600 tonne) capacity PTCcrane. Mammoet describes this operation as a perfect example of its factory to foundation capabilities.