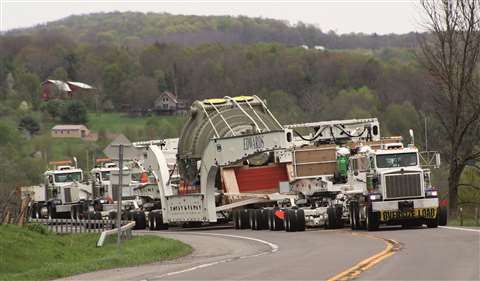 The multi-state route was mountainous with several steep grades.

When loads exceeding 250,000 pounds need to be moved, the services of an expert specialized transportation company must be procured.

Shelbyville, KY-based Edwards Moving and Rigging has the equipment and the expertise to perform highly complex and specialized heavy hauling and rigging projects. The company owns several unique trailers designed to haul 375,000-pound turbines for combined-cycle power plants that use gas and steam turbines to generate more power than a standard plant with a single gas turbine. Instead of using huge 12-foot-wide prime movers, which are not typically equipped to get up to highway speeds and can only be operated on roads and highways under the restrictions of state and local conditional use, Edwards relies on several Kenworth C500 trucks to haul those payloads.

“The Kenworth C500 offers us the power and transmission combination that can pull our trailers fully loaded with gross combination weights up to 900,000 pounds or more, and can haul empty trailers up to highway speeds in between loads,” said Bill Watts, vice president of operations for Edwards Moving and Rigging.

Recently, three of the company’s C500s were used to haul a 187-ton turbine 230 miles from the manufacturer in New York over the Adirondack and Pocono Mountains to a combined-cycle plant in Pennsylvania. A fourth C500 served as a backup unit to help move the 350-foot-long truck and trailer duo – with a gross combination weight of 900,000 pounds – on long stretches of road with steep grades through the Adirondacks and Poconos.

On average, it took seven days to move the pieces from the manufacturer’s plant to the transload site. 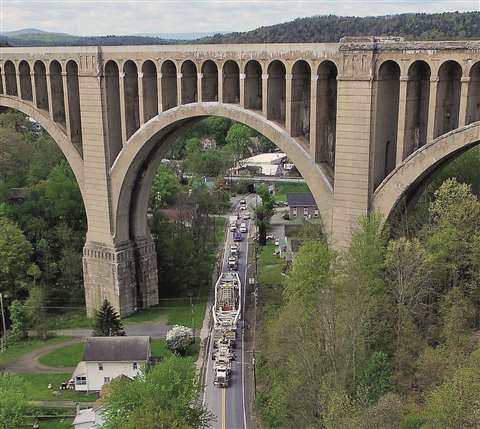 “The time frame was determined by many factors such as what time of the week the turbine was loaded, when the State Police could perform their inspections in the multi-state move, availability of state police escorts along each state’s route, etc.,” Watts said. “Scheduled overnight stop locations had been identified along the route and were utilized.”

An average of 16 vehicles traveled with the load each day – to include State Police escorts, private escorts with high pole, DOT support, utility contractors for line raising and five to six Edwards’ vehicles for crew support.

The challenges of the project were mainly centered on the steep grades and mountainous terrain.

“The multi-state route was very mountainous throughout the entire route,” said Watt. “Other challenges included movement through numerous small villages and towns along the route with a variety of utility and signal obstructions that had to be raised for passage, hard overhead obstructions such as overpasses and bridges that had to be bypassed by backing up off ramps and/or crossing medians to exit on an on ramp, the jumping of two low-weight bridges and many tight turns.”

The three Kenworth C500s were utilized as the prime movers, one pull and two push as required. The A500 trailer had an 8-dolly axle with a 30-foot deck and low girder configuration for the transport. The trailer capacity is 250 tons or 500,000 pounds. 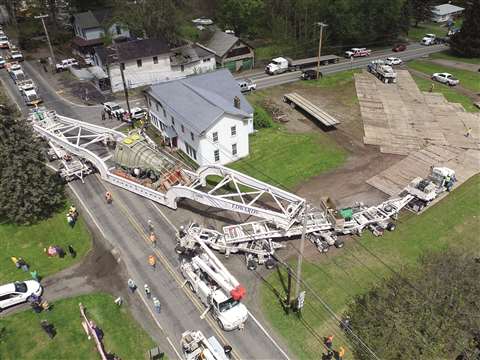 Edwards’ convoy moved through numerous small villages and towns along the route with a variety of utility and signal obstructions that had to be raised for passage.

Edwards hauled two similar turbines earlier this year and in 2016. Unlike larger and wider prime movers, the 8-1/2–foot wide Kenworth C500 can operate on the road without requiring a conditional use permit.

“Because the C500 is an over-the-road compliant prime mover, we can position our equipment much faster. When the move is done, we can stack the trailers and use our C500s to transport them to the next jobs without having to arrange transportation for both the trucks and trailers,” he said.

Edwards operates the third largest fleet of Goldhofer THP hydraulic platform trailers in the United States, the company said. With more than 200 lines of hydraulic trailers available, the company can arrange them in various configurations to achieve a variety of payload capacities. Edwards is one of only two firms in North America with a 110-ton Goldhofer Faktor 5 trailer, which has a payload capacity five times its tare weight. The Faktor 5 features a beam suspended over two sets of 20-axle hydraulic lift trailers that can be extended to a span of more than 150 feet, or to the length of nearly a football field. It can also be raised or lowered up to 5-1/2 feet. 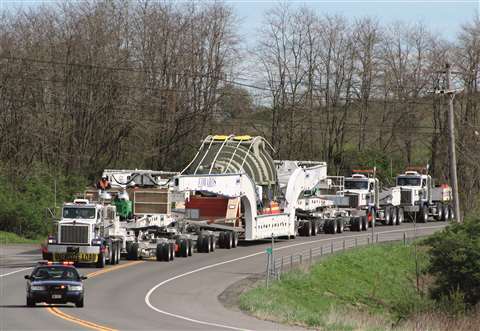 Edwards Moving and Rigging recently hauled a 187-ton turbine 230 miles from the manufacturer in New York over the Adirondack and Pocono Mountains to a combined-cycle plant in Pennsylvania.

Edwards also operates Aspen A250 and A500 dual lane trailers, which allow movement of loads across a non-suspension bridge on a divided highway or interstate using both travel lanes and bridge decks.

Edwards hauls several hundred loads varying in size and scope each year using a fleet of about 30 trucks. Before the company bought its first two C500s, Edwards used specialized trucks to haul the heavier loads, Watts said. While the specialized trucks had the necessary power, because of their width, they had to be hauled to the move, along with the trailers, and then picked up once the move was completed. In 2011, Edwards began buying Kenworth C500s after meeting with Duane McDaniel, branch manager of local Kenworth dealer Worldwide Equipment in Middlesboro, KY, and engineers from Kenworth. Since 2014, Edwards Rigging and Moving has bought four more of the C500s.

“We have found Kenworth engineers and the Worldwide Equipment staff, led by Duane, to be quite knowledgeable about the heavy haul industry,” Watts said. “They ask all the right questions to get to know the specific needs of our operations and offer expert advice in helping us choose the right specs to meet those needs.”