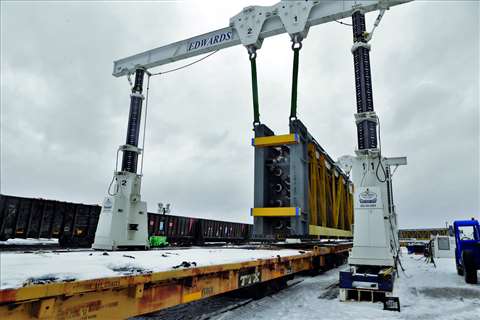 The larger components arrived by rail for offload and transport to the job site, including 32 HRSG modules, the heaviest being 365,967 pounds; two gas turbine generators weighing 726,636 pounds each; two gas turbines at 650,849 pounds each; one steam turbine generator weighing in at 674,099 pounds; along with a K Turbine, N Turbine, two condensers, inner and outer casings and three transformers.

Edwards utilized its 700-ton J&R Engineering Lift-N-Lock gantry system for lifting and transferring the components from the rail cars to its Goldhofer transporters. The gantries and transporters were configured at the rail yard that was in close proximity to the project. The gantry was configured onsite over the rail siding lines with enough gantry track and with 125-ton power links which enabled the ability to adjust their position for the various lengths and widths of the components that needed to be offloaded from several different types of rail cars, as well as to keep those lines operational when offloading activities were not occurring.

Edwards also assembled onsite the self-propelled Goldhofer transporter as well as the over-the-road transporters at the rail siding in the component staging area. This allowed Edward’s crews to rapidly offload railcars, stage and prepare the components for their eventual delivery to the final job site in accordance with the site delivery schedule.

Synchronizing the resources and timing for the offloading, transport and final onsite setting operations during a period of extremely harsh winter weather conditions were some of the major challenges of the project.

“Despite temperatures in the single digits with wind chills below zero, our crews safely offloaded, staged, transported and delivered every component while maintaining the site schedule,” said Veronica Richter, Edwards’ project engineer. “Our crews dealt with snow, ice and heavy rainfall and kept all of our equipment operational while safely providing the quality and service our customer expects.”

The offload took place in a busy commercial rail yard containing many rail customers. Close coordination of the arriving loaded car trains, as well as the release of the empty cars were crucial to maintaining the customer’s site schedule.

Edwards coordinated daily with the rail yard operations manager to ensure delivery timing, placing of railcars, offloading activities and removal of empty railcars were synchronized with other ongoing projects in the yard.  The project began in October 2016 and final offloads were completed in March 2017 with the bulk of the rail offloading activities occurring in January and February 2017.

Edwards’ personnel and equipment worked in heavy winter precipitation and brutal single digit temperatures to successfully complete the project. Most of the components were transported on self-propelled Goldhofers with only a few being transported on combination trailers utilizing Kenworth tractors for power.