In May 2017, Edwards was contracted to haul three of the largest-ever fully assembled turbines from Schenectady, NY to a new combined cycle power plant in the hills of Jessup, PA. From the moment Edwards was awarded these moves, the intricate pre-planning, problem solving and conceptualization of how to move cargo 375,000 pounds, 16.25 feet tall and 16.48 feet wide across a 260-mile route began. 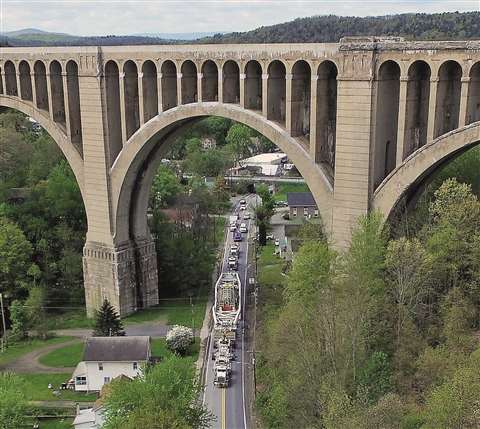 After six months of pre-planning, the first turbine was loaded via in-plant overhead crane onto the Edwards dual lane 32-axle Aspen A500 expandable transporter with three Kenworth prime movers attached. The final gross weight of the configuration came to 913,227 pounds and measured 345 feet long, 18 feet tall and its widest expansion was 20 feet 2 inches wide.

After bridge mitigations, Edwards had one last major task to complete. To circumvent a very sharp switchback turn in the Binghamton area, utilizing state troopers, Edwards stopped traffic over a major interstate while simultaneously stopping the cross traffic on a major

local road. The team then backed the entire transporter across the bridge onto a local road, pulling forward onto the interstate once the turn was mitigated. 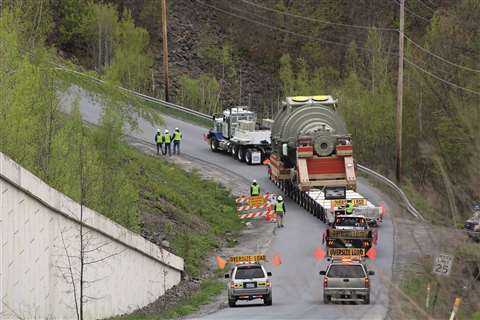 Much of the route was situated within the Adirondack Mountain range and steep grades and downhill slopes were numerous. Several turns consisted of rock walls on one side and no shoulder on the other.

The following days included additional tight turns that required meticulous maneuvering of the trailer, including a turn around a historic antique shop in which an additional crew moved ahead of the load and laid out more than 60 mud mats to cover the dirt lot. There were two bridge structures to be jumped and two overpasses to work around.

Mitigation of the second overpass shut down one of the heaviest-traveled interstates in the area. The transporter backed up the offramp traveling north in the southbound lanes, and then crossed the median to continue south in the northbound lanes. The transporter then exited onto a local road. This was completed utilizing a multitude of mud mats, seven law enforcement officers and extensive strategic planning.

The load continued its planned path to a pre-negotiated transload location where it was lifted by Edwards 700-ton gantry system, then lowered onto an Edwards 18-line Goldhofer trailer with the nation’s first-ever ADDrive 6-line trailer engine section pushing, and a Kenworth prime mover pulling the load. The Goldhofer ADDrive module replaced the back two prime movers, thus reducing total weight of the load and providing maximum maneuverability on the job site.

After 2,993-man hours, the turbine was finally on its last five mile stretch of steep 8-11 percent graded route to the Jessup, PA power plant. Once at the final site, the Kenworth prime mover was removed and the Goldhofer ADDrive served as a self-propelled module to position the turbine under the hook on May 11, 2017.