Gantries are simple machines, but new technologies are giving them further versatility for more complex projects.

Electronic synchronization of gantry operations has continued to expand in the market. J&R Engineering’s Equalizer System has become an operator favorite. Recently the company added more user-friendly features to the Equalizer System, including a warning to the gantry operator in the case that one (or more) of the lift housings become out of level, and which housing(s) are affected, and a notification to the operator if any one of the lift housings become overloaded during load shifting or lifting.

Phoenix Machinery Movers set a 2,750-ton press crown using a Lift-N-Lock T1100 gantry with the bolt on boom height extensions and stabilizer bars. The load traveled 110 feet and the last 50 feet was traveled at a 38-foot beam height. The load was side shifted onto eight keyways.

These features compliment the standard lift, lowering and traveling PLC synchronization that continues to allow for full proportional speed control. In addition, all relevant information such as lift position, travel distance and weight of the load being lifted is indicated on the interactive operator screen. The Equalizer System includes a portable radio remote control station for increased operator mobility.

Another trend with J&R’s users is Bolt-on Boom Extensions, which increase lift heights, and are available for all Lift-N-Lock gantries. These are cost-effective when compared to raising track heights with cribbing or using stands.

Another new feature is CARL Connect. With the addition of a Bluetooth module, supplied as standard equipment with a CARL System, CARL Connect allows for remote diagnostics and programming to be accomplished wherever mobile phone data service is available through a free smartphone application. 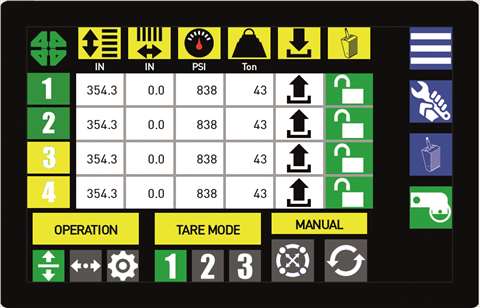 The new 7-inch operator interface screen on the CARL Control System employs touchscreen technology, allowing for the use of pictograms for ease of operator usage.

New sensor technology allows for an industry leading precision of less than one-half inch of hysteresis between four gantry legs. This more precise sensor technology is available as an optional upgrade to the standard CARL System supply.

“With a maximum lift height of 30 feet with 300 tons, this model fills an important transportability versus capacity gap in the market that was previously unfilled,” he said.

Other features are Lift Systems’ patented hydraulic wedgelock system and true-freewheel design feature for its integral drive systems. Further, the 34FBG4300WS is fully ASME B30.1-2015 compliant and tested.

This latest addition to the Enerpac telescopic hydraulic gantry portfolio is the Enerpac SL400N Super Lift, which achieves high capacity and lifting height with an efficient footprint.

“The SL400N is designed based on the significant growth seen in relevant markets and the need for greater lifting capacities in tighter spaces,” said Pete Crisci, Enerpac’s product line director for heavy lifting technology.

The capacity limits of existing narrow track gantries meant less options to lift and position heavy loads in applications where traditional cranes will not fit or are too expensive to mobilize. But moving to a wider track to increase heavy lifting capacity was not an ideal solution. Working in tight spaces, like inside facilities, equipment must be compact and efficient. Enerpac engineers increased lifting capacity without having to go up to a wider gauge track. 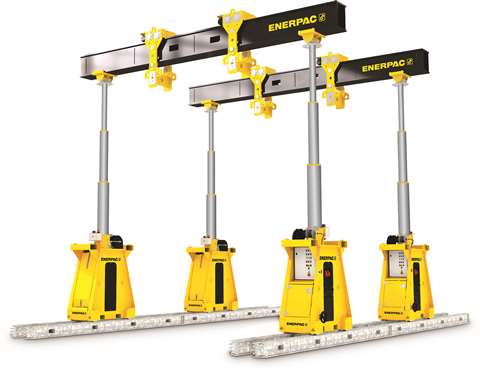 The SL400N can lift up to 400 metric tons (first stage) with a 7.7-meter lifting capacity on a standard 2-foot track. By being able to stick with this slender track gauge, the unit can easily be moved around existing obstacles. Operators can spend less time navigating impediments or moving them and use less resources to mobilize and demobilize the equipment.

It features standard self-contained hydraulics. Each gantry leg has a built-in hydraulic pump which eliminates trip hazards by eliminating the need to connect hoses. It also includes standard self-propelled rollers. Powered by the Enerpac Drive System, the self-propelled rollers allow for synchronized travel, continuous movement and require less space and track. It is also safer – synchronized movement maintains safety because having significant difference in leg position can lead to load imbalance, damage to equipment or accidents, the company said. And finally, the new gantry has standard wireless controls.

Shuttlelift DB, SB and SL series rubber-tired gantry cranes feature lift capacities up to 1,000 tons and greater. All models are available with the linkageless steer system.

Linkageless steering can also give the machine additional versatility should a customer need to widen or narrow it for any reason in the future. The linkageless system does not have limits set by the steering geometry so there is no additional rework required to the steering components when adjusting the width of the machine. 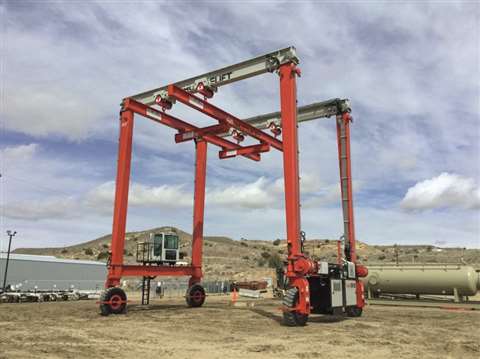 The Shuttlelift linkageless steering system does not have limits set by the steering geometry.

The AccuSteer Differential GPS navigation system by Mi-Jack Products was a key component for a lane-widening project on the Caloosahatchee River Bridge in Central Florida. The project was a joint venture of the deMoya Group and Leware Construction.

The interstate bridge sees an average of 72,000 cars a day, and in addition to maintaining the traffic flow, contractors had to ensure that sensitive areas of the environment are protected. A small island under the bridge, the Caloosahatchee Wildlife Refuge, is government-protected land and can’t be disturbed.

The construction team used a pair of Mi-Jack MJ70 Travelift cranes with an 83-foot, 6-inch inside clear width. The cranes straddled the bridge, with one set of tires on the East span, and the other on the West span. Contractors were concerned about how to keep a 92-foot wide machine inside its allocated runway while driving on two separate bridges in a continual arc and 3.5 percent grade.

Mi-Jack Products proposed installing its AccuSteer Differential GPS navigation system, which collects information on the crane’s position using two GPS receivers fixed to each Travelift crane and receives position correction data from a strategically located base station. In this case, a solar-powered base station was placed at the peak of the bridge outside the lanes of traffic.

The AccuSteer Navigation Processor generates steering correction data for the crane’s Electronic Control System (ECS) which is translated into crane movements. That process allowed the cranes to travel along a GPS-generated pathway to within plus or minus two inches of the center line of the tire. Mi-Jack was even able to extend the mapped tracking line another 200 feet beyond the bridge for one of the cranes to facilitate the unloading of material from trucks in the interstate highway’s median, and allow the operator a smooth steering transition back onto the bridge. The accuracy of the AccuSteer system is within two centimeters. The system calculates position up to 20 times per second.