Imagine a five-mile journey that required hundreds of hours of planning, engineering and ingenuity. Well, this journey was real for Emmert International, and involved transporting a product purge bin and more than 8,000 freight tons of associated freight from Port of Point Comfort, TX to a plastics plant in Point Comfort. The route was short but required overcoming an inordinate number of obstacles and coordination with many entities. 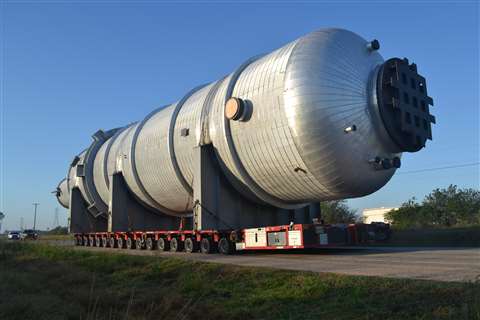 After much consideration of the immense and awkward size of the purge bin, Emmert International selected a specialized configuration of transport equipment to meet the demands of this challenging job. Emmert utilized a self-propelled 16-line double-wide Goldhofer PST-E transporter that would allow for maximum maneuverability. 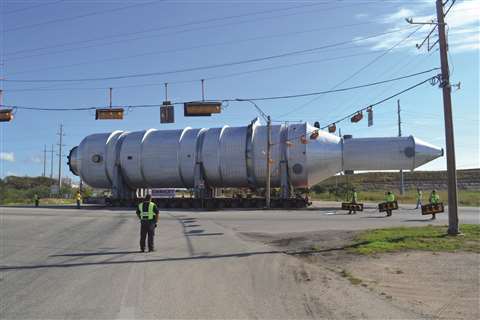 The bin’s enormous height interfered with several critical transmission lines, some that could not be de-energized.

Due to the overall transport height, the purge bin interfered with several critical transmission lines. Some of the transmission lines could not be de-energized, including a power line to an existing plant on the route. Emmert personnel met with the plant facilities manager and agreed to provide a portable generator during the transportation of the purge bin to keep the plant operational.

Two primary transmission lines that supply power to the Houston area also could not be de-energized simultaneously. To cross under these power lines, Emmert’s team had to obtain special permitting from the Electrical Reliability Council of Texas and American Electric Power.

The customer was also concerned about the removal of a traffic signal at a major intersection on the route. The plant had more than 7,000 contractors and employees going through this intersection daily during shift changes. 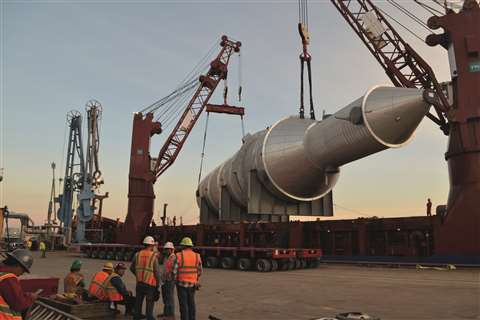 Due to limited dock space and no laydown area, Emmert received the bin directly to its Goldhofer transport system.

Emmert developed a minute-by-minute schedule for the transport of the purge bin. This schedule synchronized the de-energizing of the powerlines and crossing through the intersection at a time that would not interfere with the shift changes. It took less than 10 minutes to lower the traffic signal, transverse the intersection and reinstall the signal.

The project required a large logistical effort to maintain constant contact and seamless coordination for the transport.

Leaving the Port of Point Comfort with a vessel of this size required Emmert to make its own path. Emmert International opened a temporary fence and placed down steel matting. While the fence was left open private security was required. Once the purge bin had cleared the port, the temporary gate and matting was removed.

There was a continued coordinated effort with public authorities and utilities to secure a safe transport. Police escorts were required for handling local traffic along the entire route.

The project also required coordination, consolidation and transportation of accessory components that arrived on the same ship as the purge bin. Emmert received direct discharge of all of the accessories from the ship and transported them to the project site on 58 legal truckloads and eight oversized transporters. Meticulous planning and innovation were employed to meet all challenges along the journey.