High pressure feedwater heaters (FWHs) used in power plants generally last about 30 years. But at the Oconee Nuclear Station near Seneca, SC, two of these massive units actually worked for 40 years until it was time for new ones. Replacement would be tricky, but Engineered Rigging, based in Russellville, AR, was up to the challenge. 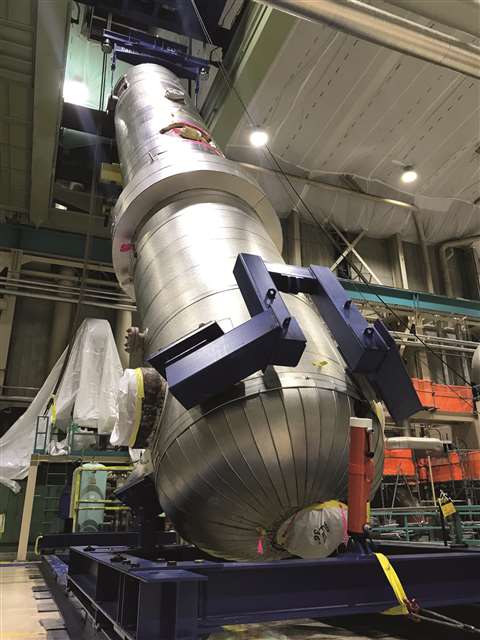 Engineered Rigging’s motto is “innovators in motion,” which really rings true for this project. The company used a technological approach to bidding the job, employing 3D modeling and animation to show the client the solution for the safe removal and replacement of the two FWHs.

Given a 17-day window for the completed project, Engineered Rigging was faced with many challenges, including really tight clearances, major equipment obstacles and asbestos insulation. Both of the old units were installed in a vertical position with little flexibility to maneuver the 24-inch inlet and outlet elbows for fit-up. The position of the pedestal mounting plates dictated that all 24 ¾-inch bolts align in conjunction with the fit up of the 24-inch inlet and outlet elbows. Both FWHs had lift trunnions that failed the NDE visual and PT exams due to cold lap and lack of fusion.

The 126,000-pound heaters were originally installed during the construction phase of the plant with heavy lift cranes hoisting them into place. The existing overhead crane lacked the required headroom to extract the old units vertically. In addition, the as-built configurations of the old FWHs did not match the design drawings of the replacement FWHs. The new units were fabricated according to the design drawings.

Hole patterns within the two FWHs varied with each and every foot. Extracting the FWHs presented a 5/8-inch interference clearance of two safety related cable trays containing approximately 80 cables that could have resulted in unit trips for both Unit 1 and Unit 3. The old FWHs would be removed, handled and shipped with asbestos insulation and replaced with new, non-asbestos insulation installed prior to lifting operations.

Engineered Rigging addressed the challenges by developing a 3D ACAD solid model that became the base information source for decision making. Using laser scanning, a point cloud was created for all areas of the work zone. The critical metrology – the bolt alignment and the 24-inch inlet and outlet nozzle points – were measured using discrete laser points. Both the point cloud and the discrete laser measurements were combined in the 3D ACAD animation and modeling. The 3D model was overlaid with design information to determine any and all dimensional bursts. Also, field measurements were performed at random places to confirm the point cloud and model.

The newly fabricated replacement FWHs were adjusted to reflect the as-built dimensions. Several of the feet were rotated on the azimuth and the bolt holes were drilled to reflect the variety of hole patterns within the feet (as built) at the fabricator’s shop. The cut lines for all piping were laid out and based on the modeling information. 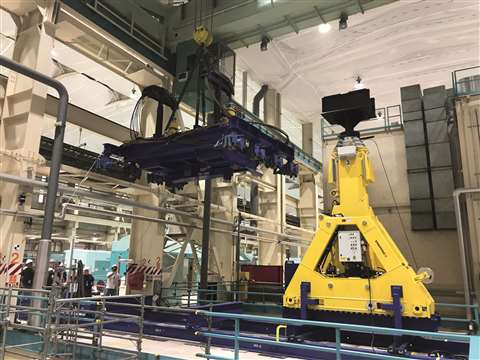 The two feed water heaters were replaced safely and without incident in 12 days, five days ahead of schedule.

The 3D model also provided adequate information for the development of a lift and rigging plan that provided additional headroom.

Engineered Rigging’s team of eight in-house engineers developed a Temporary Lift Device (TLD) that incorporated computerized strand jack technology and 100 percent remote operation. The TLD incorporated two 200-ton capacity strand jacks and eight 50-ton wheel trucks. Once placed on top of the gantry crane that services the FWH’s cubicle, the team had full control of the load during the lifting operations. It was designed with lift, trolley and side shift capabilities with precise positioning of the load.

Remote cameras were used to monitor and perform finite movements.

The TLD was designed as a single failure-proof system at the client’s request. This reduced the overall risk factor of the project by a substantial margin.

The TLD design provided the additional headroom needed to lift, remove and replace each FWH through a vertical transition of approximately 48 feet. The TLD offered X, Y and Z axis of control achieved through a hydraulic movement and could be varied in millimeters. 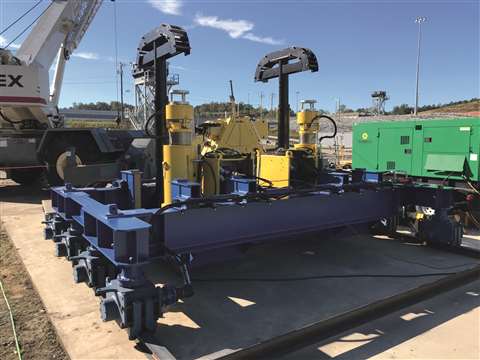 The Temporary Lifting Device was designed with lift, trolley and side shift capabilities with precise positioning of the load.

“The finite control during the lift cycle provided 5/8-inch clearances of the cable trays, which was just sufficient for the team to lift and handle the 126,000-pound FWHs with the insulation installed,” said Christopher Cox, president of Engineered Rigging.

Weld repairs on the lift trunnions were made online. The FWHs were at a 425-degree shell temp in the pre-outage phase. The two FWHs were replaced safely and without incident in 12 days, five days ahead of schedule.

“The challenges associated with removing the original equipment were identified in the planning phase and mitigated using metrology, 3D modeling and 4D animation,” said Cox. “Safety and quality are the cornerstones of our business. We achieve both in a conscientious and professional manner that merits the confidence of our customers.”