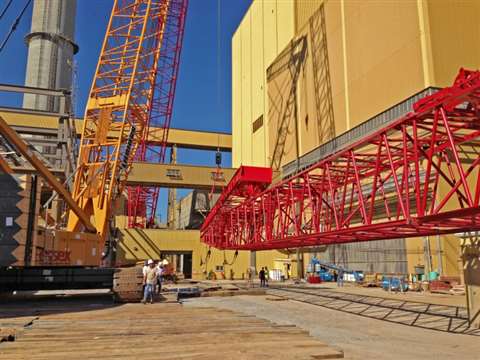 Essex Crane Rental’s Liebherr LR1100 fits through a tight space moving in and out of a courtyard during a Manitowoc Model 888 Ringer assembly.

Sometimes, rigging a crane for a job can be as complicated as the lifting assignment it will eventually perform. Such was the case recently when Essex Crane Rental Corp. dispatched five cranes and an assembly crew to a coal-fired power station in Kentucky undergoing a $772 million retrofit/expansion to upgrade air emissions control systems.

The scope of the crane work is structural steel construction and duct work installation, according to Bill Erwin, Essex Crane vice president of operations.

Cranes from the Essex fleet include a Manitowoc 888 with Ringer and luffing attachment, a Manitowoc 16000 with luffing attachment, a Liebherr LR1300 with fixed jib, a Manitowoc 999 with an upper boom point and a Liebherr LR1100 with an upper boom point. Additional assist equipment on the job includes an 80-ton capacity rough terrain crane, a 120-foot manlift, a heavy duty forklift and a Hyd truck crane equipped with a man basket.

The Model 888 Ringer’s 45-foot base and strong capacity chart made it an ideal choice for the confined courtyard where the crane needed to be placed. The difficulty came with how to assemble the Model 888 when the only access points to the courtyard was a small opening or lifting over the top of the existing structure. Essex Crane committed to its customer, KBR, to perform the assembly safely and efficiently.

With the two Liebherr units assembled, the LR1100 was moved into the courtyard to assist with the assembly of the 888 base unit, the 45-foot ring attachment and the 225-foot main boom.

With the limited room in the courtyard, the Model 888 Ringer attachment was precisely located by KBR Engineering to allow the assembly of the 225-foot main boom, load block and then the main strut for the luffing jib.

The job for the LR1300 was to receive the 84 incoming truck loads and hoist each load over the existing structures and into the courtyard. The exceptional capacity of the long boom LR1300 allowed the Essex rigging crew to assemble the Ringer without having to rehandle the components. More than 90 percent of the assembly was performed as it was delivered, which required expert logistics planning and engineering, Erwin said.

“The added bonus for our client was the use of the LR1300 for bag house construction while the 888 was being assembled,” he said.

With this very difficult step completed safely and on schedule, the Essex riggers continued with installing the eight-part load block on the luffing jib.

The combination of 225-foot main boom and 180-foot luffing jib gave KBR the ability to work with 190,000 pounds and stay well within the crane’s capacity chart.

Erwin set up operations onsite through the completed assembly to help manage the Essex rigging team, and the centralized Essex Logistics Management worked closely with the client.

“We were focused on a professionally managed, timely and safe assembly,” Erwin explained. “Our client and the project owner were a pleasure to work with.”

Precise assist crane placement and personnel handling was done with pre-engineered processes, which included consultation with Manitowoc Cranes, so that assembly safety was the highest priority. The entire job was completed with zero incident or injury, Erwin said.

When the first phase of the work is completed, the Manitowoc 888 with Ringer and luffing jib will be disassembled in the air, once again. The disassembly will be performed with less room and tighter site conditions. Additional components will be removed in the air, as well.

Once disassembled, the Model 888 with Ringer and luffing attachment will be moved to the second phase of the project, and then reassembled. In total, Essex will assemble and disassemble the Manitowoc 888 Ringer with luffer four times during the project duration.

“Our client, KBR, and Essex worked together as partners to complete a difficult but safe and efficient assembly,” said Erwin. “My time onsite allowed me to manage the assembly operation and work closely with the KBR team.”

Stacy Creekmore, KBR’s project manager, admitted that the task of rigging the crane in the air was difficult.

“We gave Essex Crane a difficult assignment of rigging up the 888 Ringer in a confined space,” said Creekmore. “With safety being the highest priority, they completed the assembly successfully and on schedule.”

“The performance of our people and equipment exceeded our expectations,” said Erwin.