From dimensions to distance, Express Mondor recently made one of the toughest trips in the company’s history. It was a journey that would test their crew as well as their trailer. 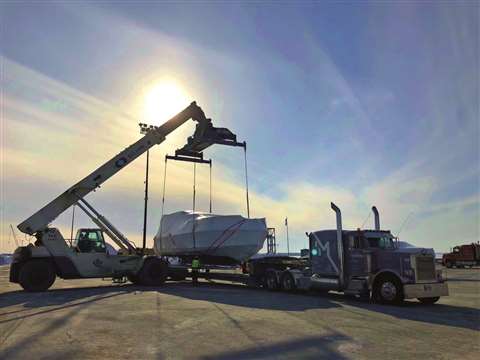 Weighing 20 tons, the boat was 14 feet wide and 40 feet long, making the job tricky from the start. If the awkward dimensions weren’t enough, the crew faced a dangerous task of driving over several narrow bridges. There were also trees and power lines to avoid.

Jobs like this present many risks: scratching up the boat and/or making a mess in its wake by taking out trees and power lines. No matter the unique sets of challenges, the goal at Express Mondor always remains the same: deliver the product on time and unscathed.

Using its XL Specialized XL 80 HDE trailer, Express Mondor traveled to the port in Prince Edward Island to pick up a tourist boat delivered from the United Kingdom.

The Express Mondor team successfully covered 1,000 miles of ground in crossing the Canadian Maritimes (New Brunswick, Nova Scotia and Prince Edward Island) to deliver the boat to a Canadian federal company in time for the summer tourist season at Canal Rideau in Ottawa.

“It was a challenging move for us, but the XL 80 did the job like it always does,” said Billy Mondor, vice president. “The boat’s dimensions made it very difficult. Not only was the boat long, but also tall and wide. It is always a question of height when discussing oversize loads. We can manage the aspect of the widths very well, but height is difficult with obstacles such as bridges, trees and wires. It required a very concentrated effort by our team.”

Making it back with plenty of time to spare, the cargo remained secure and unharmed. The boat, which could test any heavy-haul company, was no match for a good trailer and a top-notch crew, Mondor said.

“We love how lightweight XL products are, but above all, they are so reliable,” said Mondor. “In 22 years of operation, we have never had any of our XL’s break down at the structure level and that is really remarkable. With the range of products we deliver, nothing is ever the same. Because of this, the XL extendable has really been a fantastic trailer and is so adaptable in all circumstances. It really reduces the headaches of trying to figure out how to load equipment with large dimensions.”

Based in Quebec, Canada, Express Mondor was established in 1995 as a heavy haul carrier. The company originally served local agricultural customers before expanding to the general transportation arena in the Montreal-Toronto corridor. Shortly thereafter, the family-owned company found its niche in the growing demand for moving oversized equipment. The ability to transport large equipment opened a big market for the business, Mondor said.