Social media goliath Facebook has halted construction on a new $750 million data center in Alabama, due to COVID-19.

On a post on Facebook about the project the company wrote that, “To help protect the health and safety of construction crews during the COVID-19 outbreak, we are significantly reducing construction activities at our site.” 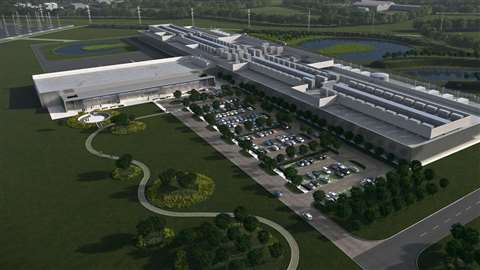 An rendering of what the new data center will look like.

The company also announced that, alongside the general contractor for the project, Mace, it has suspended construction on its massive expansion project at the company’s data centre campus in Clonee, Ireland.

The data center in Clonee opened in 2018 but, due to high demand, the company last year announced it would double the campus by constructing two new data centers onsite.

Facebook said an “appreciation bonus” will be paid to the construction workers who were temporarily removed from the site, according to a report from RTE.

So called ‘hyperscale’ data centers are an emerging construction trend for the big technology companies of the world.

According to data from Synergy Research Group Hyperscale capex (capital expenditure) spending on data centers reached an historic high of over $120 billion in 2019, peaking with a record-breaking fourth quarter of over US$32 billion.